It was an enjoyable evening had by all last night at the Holiday Inn, Gloucester Road, as a well-read panel shared their views on Arc weekend, and top class equine scraps further down the line.

Anchored by the talented Gina Harding, Channel 4’s most promising new presenter invited the opinions of her co-panellists – Tony Calvin (Betfair), Nick Smith (Ascot Director of Communications), and Adrian Beaumont (International Racing Bureau) – as well as throwing some prospects into the mix herself.

I’ve taken things in sequential order in the below (starting with a rather un-opinionated Saturday) and, where I have any sort of view, that is appended beneath the race in question.

AB – Vent de Force runs for Britain on a day when we’re largely absent, but looks to be up against it.

NS – Kaldera (12/1) a good fancy. Goes on any ground, improving, winner of last two at up to a mile and six and will relish the slightly longer trip. She’s also won at the track and is a relatively fresh filly after a mid-season break.

AB – The annual Cirrus Des Aigles (3/5 best price) benefit (already a three-time winner) ought to go his way again, en route to Ascot the Champion Stakes. If there is a danger, it might be Andre Fabre’s Fractional.

TC – Sole Power (5/2) has everything in its favour except its price. Cotai Glory (11/1) could be interesting in receipt of 18 pounds as a juvenile.

AB – You probably need a single figure draw to be competitive. The going is currently good with no rain forecast. Ryan Moore to ride Cotai Glory. Loves Sole Power, but outsiders with a squeak might be Catcall (14/1, short neck second in the race last year, goes on any ground) or Mirza (20/1, Rae Guest going well, and he’s a course and distance winner last time out).

NS – Loves Cotai Glory. Though perhaps mainly because it dumped the jockey, allowing Smith’s wager to be a winner on the second best horse in that race! Stepper Point (8/1) might be solid each way, granted a low draw.

MB – I think Sole Power will win. And if he gets a draw in the low teens, so much the better, as he’ll be away from the guts of the scrimmaging and is much the best horse in the race. He’s finished 3rd, 5th, 6th in this race in the past three years, with excuses – not the same horse, unlucky to be beaten a head in ’11; hated the heavy and soft ground in ’12 and ’13. It’s 5/2 he doesn’t meet trouble in running to my eye, and that’s more than fair.

AB – Andre Fabre supplemented Shahah (10/1) for this, so she might be good. Alternatively, it might be owners Al Shaqab Racing keen to have a runner! Ervedya (7/2) however is very interesting. Third to two smart colts in The Wow Signal and Hootenanny in the Group 1 Prix Morny last time, she sets the standard. She is stepping up from six furlongs to a mile however.

NS – Ervedya‘s form looks the best in the race.

AB – The Wow Signal (7/4) will take all the beating IF he stays. Frankie Dettori rides. Full Mast (7/1) is unbeaten, and trainer Criquette Head likes him a lot. He won the Prix La Rochette over course and distance last time, beating Nucifera and Territories (20/1). 16/1 Nucifera is very big. Citron Spirit and Burnt Sugar have been supplemented, with Gerald Mosse riding the latter.

NS – The Wow Signal looks the one, though 14/1 Aktabantay might be ok in first time blinkers.

GH –  Aidan O’Brien has won this race seven times before, so Gleneagles and possibly War Envoy (if running) must be taken seriously.

MB – Full Mast got first run on Territories and Nucifera last time and, if that form is any good – a question yet to be answered – there is decent value in the price of both second and third. Both were closing down the outside having spotted the leader a two lengths and more, both will be more intent on winning the G1 Lagardere than the G3 Rochette. That said, The Wow Signal will probably win if staying, and Gleneagles looks likely to run his race with stamina assured.

NS – Tarfasha looks big at 7/2. Good win in Ireland over Champions Weekend, and Oaks second the pick of the form. Forgive her Irish Oaks running which was all wrong.

AB – Spoke to Dermot Weld and the plan for Tarfasha is to go to the Breeders Cup Filly and Mare Turf, via the Opera.

TC – With 20 runners and a wide open renewal, it’s fair to expect that bookies will have all sorts of concessions on the day. Ryan Moore has suggested there are at least a dozen horses that can win. Moore feels Just A Way (7/1) is the best horse in the race, but there’s a doubt about whether he’ll stay. Harp Star (8/1) is a very good filly, but the jockey is a major worry (shocker of a ride in the Japanese Oaks).

Moore was surprised Flintshire was as big as 33/1, but he was not sold on Treve‘s (11/1) action this year. She seems to be carrying an ailment. TC has backed Prince Gibraltar (33/1) – a talking horse at the start of the year, and brought along steadily all season – at 40/1 each way.

NS – Just A Way was very impressive in the Dubai Duty Free, but that was over nine furlongs. Doubt about the trip on form, but Smith feels JAW could get it. “On official ratings, he’s the best horse in the race”. Harp Star is logically unbeaten after that jockey howler in the Japanese Oaks [MB – I’ve just watched it, and it really is a shambles of a ride]. In the specials markets, 11/4 about a Japanese winner might be a fair bet.

Avenir Certain (9/1) could be UK favourite on the day. The question is, will she stay? She’s unbeaten at up to a mile and a quarter, including two Group 1’s, but she’s not bred for middle distances and it’s a leap of faith that she can see out the extra quarter mile in the biggest race in Europe. Gregory Benoist has ridden both Avenir Certain and Ectot (13/2) this season, and he’s plumped for Ectot. That might be to stay ‘on side’ with the Qatari’s who own that one… and it might not be!

Ruler Of The World is a bit exposed but has half a chance of making the frame, but Ivanhowe (16/1) looks a better each way bet. He can throw in a stinker occasionally, but has as good a chance as any other older horse on his German form, beating Sea The Moon.

GH – Spoke to Andre Fabre about Flintshire, and he thinks the horse can make the frame. Decent each way play at 33/1. Harp Star, despite the jockey reservation, for the win.

AB – Flintshire will be heading for the Breeders Cup Turf after this. At a huge price, Spiritjim (40/1) looks a very good horse. Trainer Pascal Bary apparently thinks he is out of the top drawer. Won a Group 1 before getting beaten by Ruler Of The World in the Prix Foy (after a two and a half month break), and will be a LOT fitter on Sunday.

MB – There were brief mentions for both Taghrooda (5/1) and Tapestry (14/1), both of whose chances were largely dismissed. I like both fillies, but it’s a wide open contest. the draw – being made any minute now, as I write – will be a key factor, and a single digit stall allied to a prominent (ish) running style could be optimal. I’d say that Ryan Moore has been conservative when suggesting ‘only’ twelve horses could win this. I think it’s more like fifteen!

The ones I’m NOT interested in are Ruler Of The World, Montviron, Treve, Free Port Lux, Al Kazeem, and Chicquita. The rest? Well, all the way down to Siljan’s Saga (100/1, head second in a mile and a half Group 1 two starts back), a case of some description can be made.

Here’s the bottom line. This is a trophy race, from a betting perspective. Nobody can possibly have a strong view on one horse above all others. As such, don’t be afraid to take a big price, and wipe your mouth if one of the fancied nags wins.

I’ve backed Tapestry at 55 on Betfair, and have just been delighted to note she’s drawn stall eight, which is about plum. To her, I may take Flintshire and Spiritjim on the back of encouraging words last night, and a couple on le nanny at monster prices on the day. 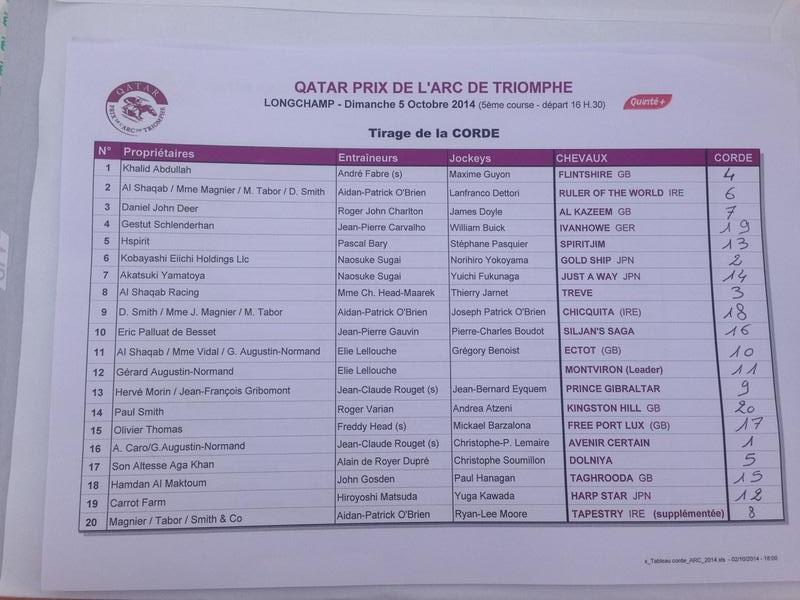 Arc Draw: Any the wiser?

I repeat, nobody can have a strong view on the winner of this race.

TC – they bet 6/1 the field which tells you all you need to know. A very hard race. No opinion.

NS – Gordon Lord Byron (6/1), last year’s winner, probably needs cut to show his best. The improving Custom Cut (10/1) has a chance. “Aljamaaheer is a losing machine” [my favourite quote of the night!]

Fiesolana (16/1) won in the Matron Stakes (1m G1) despite the trip, not because of it, and will be suited by drop back to seven furlongs.

AB –  Aljamaaheer over-priced at 12/1 (each way). Surprised Custom Cut is not being held back for Champions Day after recent run. Anodin (8/1) a bit of a talking horse in France. Likes Fiesolana, and Karakontie (6/1) is interesting on his French 2000 Guineas-winning form (and, indeed, his Lagardere win of last year).

MB – I was really taken with the way Fiesolana quickened to win the Matron, a slowly run mile event. A slowly run – or more truly run – seven furlong contest on decent ground is optimal – form of 111 – and 16/1 with racebets is absolutely massive. I’m on.

AB – Pale Mimosa is an interesting contender, though tempered by odds of 11/4. Bathyrhon (13/2) has a good chance for an under-rated trainer. Won the Prix Gladiateur last time and should go well.

MB – The Gladiateur is the pre-eminent trial for this, and Bathyrhon was a convincing winner. The second, third, fifth, seventh and eight all re-oppose but with two lengths and more back to the best of them that last day it’s hard to make a case for a form reversal. As such, Pale Mimosa looks a solid alternative in a race for small stakes. Last year’s winner Altano will want it softer in all probability.

Et c’est tout. Best of luck with your Arc weekend wagers, and thanks again to the panel from last night for their insights.