Only two of the last eleven horses to have started at 2/1 or shorter have won (and three of the last 18 to start at 3/1 or less). Douvan is currently a top price 7/4…

Only one of the last 33 winners made all or most of the running. Un De Sceaux, as short as 1/2, looks very likely to try to make all.

Just two of the last 29 winners started outside of the first five in the betting. Maybe you should reconsider that sneaky 40/1 shot you like…

The last twelve winners finished placed at worst in a Grade 1 or Grade 2 chase. Kings Palace and The Young Master have both yet to run in such esteemed company.

Eight of the last ten winners were second season hurdlers.

Ten of the last fourteen winners contested the Tingle Creek Chase. Horses likely to line up in the Champion Chase from the Tingle Creek field are Dodging Bullets, Balder Succes, and Somersby.

Eight of the last seventeen winners had been off for more than two months, from less than a third of the runners. Of interest here might be Bordini, Moon Racer, Vigil, Jetstream Jack and Livelovelaugh.

Of the last 68 novice chases at the Festival run up to 3m 1/2f, only four winners failed to finish first or second last time out. Towards the head of the market, Ptit Zig fell last time out, and Splash Of Ginge was pulled up.

16 of the 20 winners and runners-up had won at Cheltenham before. The current first two in the betting, Don Cossack and Ma Filleule, have not.

The last 13 winners had all finished first or second in all hurdling starts that season. Excluding doubtful runner, Annie Power, only one of the first five in the betting – Saphir Du Rheu – can make that claim.

17 of the last 21 winners passed the post in front last time. This counts against Kalkir and Karezak amongst numerous others.

Just two of the last 16 winners had failed to win earlier in the season. Last year’s 1-2-3-5, Lord Windermere, On His Own, The Giant Bolster, and Bobs Worth, have all failed to score this term.

22 of the last 24 winners were aged ten or under from approximately 50% representation. 12yo Muirhead – as short as 7/1 in one book – looks to have plenty on against younger rivals, as does Pearlysteps, the same age and a general 12/1 shot.

Thanks again to Paul Jones for allowing me to share this content. His excellent Cheltenham Festival Betting Guide is available to buy from here and includes a free £10 bet for all Stan James customers, new or existing, as well as various other offers and freebies. It really is a cracking read. You can follow Paul on twitter at https://twitter.com/sportspunter01.

For those in the London vicinity, London Racing Club have a phenomenal panel for their Cheltenham Preview Night tomorrow evening. Chaired by Racing Post’s excellent Lee Mottershead, the pundits cover all bases as Lydia Hislop (Racing UK, sportinglife.com), Paul Jones (that man again!), and Phil Smith (the official chief handicapper in Britain) offer their considered opinions on the action.

Full details are below: 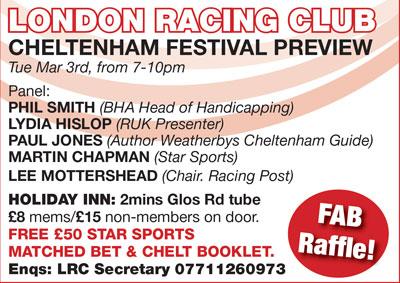 And finally, early warning that I’ll be taking part in a live Festival Preview webinar on Wednesday afternoon. It promises to be both fun and informative, and if you can’t make the live show, it’ll be online later that day for you to watch at your leisure. Do drop by and join us! (I’ll have more details of the specifics tomorrow).