The 2015 Breeders’ Cup is upon us this time next week, and this week saw the pre-entries declared. Up until that point there was speculation about which horses would run in which races, or at all.

But we now broadly know the fields for next weekend’s self-styled Thoroughbred World Championships. The great thing is that we can bet with an increased sense of confidence, albeit that horses may still get injured, run in their second preference race, or get a horror draw!

But here’s the thing. Whenever we’re betting on racing overseas, there is disparity between the British odds and those available at the host site. And that disparity means value abounds. At this relatively early stage, the UK markets are flabby and rick-strewn, allowing the clued up punter to avail of a portfolio of value plays, should she so wish.

However, there is a caveat. Outside of the Classic and a couple of other races, there are no US odds at this stage. So what I’ve done is take the ‘morning line’ prices from the Daily Racing Form, America’s daily racing newspaper (hence the name!), and compare those with the best UK odds.

Now, clearly, there is scope for the DRF prices to be wide of the mark, but generally speaking they will be a better barometer of US betting sentiment than that couched in the UK prices, which are not likely to be taking bundles of cash at this stage. If you’re still with me, let me illustrate the point.

These are the best UK prices (as of last night) for the Breeders’ Cup Juvenile Turf, compared with the DRF morning line prices. Odds with a differential of 2x (i.e. 200%) or more are marked in yellow. 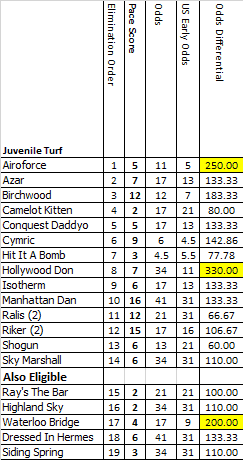 Spot the BC ricks…*

As you can see, there is some sizeable discord. Before we go further, I want to point out that it is entirely possible that the DRF morning line price is wrong, rather than the UK bookie price, but this at least offers punters the chance to do their own digging from a promising starting point.

In the above example for instance, Hollywood Don ran 3rd on dirt last time, having won his two previous turf starts in progressive fashion. It is entirely possible that he’s just better on turf. Indeed, it is likely. Whether he’s good enough to beat the Brits and Irish is another question, but 33/1 probably IS the wrong price.

This is just one angle included in my upcoming Breeders’ Cup Compendium. Also included are the following:

Here’s the timeline to launch…

First opportunity to get a copy (you’ll obviously receive all updates through the week).

Full report complete, including all of Saturday’s form summaries, contenders, possibles and selections

The full report will run to about 45 pages, and it will be available for £15, roughly £1.15 per race. In my (admittedly, biased) opinion, it’s worth more than that just for the odds differentials, especially if Hollywood Don wins the first!