IMPORTANT NOTE: IF YOU HAVE ALREADY PURCHASED THE COMPENDIUM, YOU CAN ACCESS THE FINAL VERSION USING THE SAME LINK YOU RECEIVED BY EMAIL.

The Breeders’ Cup is almost upon us. This coming weekend will see Keeneland racecourse in Kentucky host the 31st edition of Breeders’ Cup, and there are almost thirty European horses slated to contest the thirteen Championship races.

Geegeez’ Breeders’ Cup Compendium is your indispensable guide with all you need to know across two evenings of spectacular racing this Friday and Saturday. Inside the Compendium, you’ll find:

Key Race Trends: all the noteworthy trends for each event

Profile Grids: every runner in every race mapped against the trends, and including pace and odds (will be updated with stalls positions once this is available)

Pace Profiles: each race is broken down by the likely overall pace, pockets of pace (i.e. clusters of speed), and individual pace observations for specific runners

Key Trials: this new section contains links to the key races in which Breeders’ Cup contenders advertised their claims. Most of these videos are in stunning high definition, and some of the performances are pretty spectacular!

Race Summaries: a walkthrough of the form for each race, highlighting the major players

Main Contenders, Other Possibles, and Race Selections: the horses in each race I feel are most likely to play leading roles; and, where applicable, some bigger priced horses that could outrun their odds. Finally, for each race, the geegeez selection.

Below is an example from this year’s Breeders’ Cup Compendium:

How the runners fit 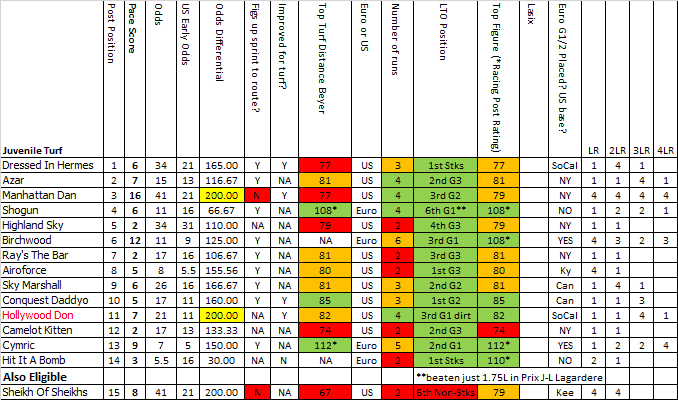 Overall: Manhattan Dan looks like leading if, as preferences suggest, Riker goes to the Juvenile. Airoforce was a lot smarter at the gate on his most recent start, and may again begin alertly in what looks a relatively sedate early set up.

Bourbon Stakes: Airoforce (on the pace throughout) beats Camelot Kitten (gaining, way too much to do) and Siding Spring

Front Runner Stakes: Nyquist (on the lead, all out) beats Swipe (came to challenge, no extra) and Hollywood Don (well beaten)

This is a relatively new race, and one in which the Euros have done very well so far. Indeed, they lead 5-3, with one of the US winners (Hootenanny) having been campaigned in Europe. We again have a strong hand with Cymric and Hit It A Bomb, though their form profiles are quite different.

KEEP IN MIND THAT THE STATE OF THE TURF IS SUBJECT TO DEBATE. IT HAS BEEN RAINING SINCE MONDAY MORNING AND IS SCHEDULED TO CONTINUE UNTIL WEDNESDAY EVENING. I’LL TRY TO UPDATE IN LATER VERSIONS OF THIS REPORT WHAT THE RIDERS/TRAINERS ARE SAYING.

Cymric is proven, having run a very close second in the Group 1 Lagardere; while Hit It A Bomb won a minor Listed event on the all-weather on his second start. Although the form speaks clearly in favour of Cymric, it is worth noting that John Gosden, his trainer, suggested after the Lagardere that he wouldn’t run again this season. There is just a niggle that this might be an afterthought, or owner obligation. Of course, it’s possible that Cymric has improved again for the run in France, in which case he will be very hard to beat.

HIAB on the other hand had been well touted prior to bolting up over seven furlongs at Dundalk, and is bred to get a mile and more. Aidan O’Brien would have had plenty of options for this and, like Gosden, is a two time winner of the race already.

Richard Fahey’s Birchwood is also entered, and his best form has been on fast ground. If it comes up firm at Keeneland, his stamina might just last, but he’d be less compelling than the other shippers. That last of the shippers is Shogun, also from the O’Brien stable. Only sixth in the Lagardere, he met trouble in running in the final furlong and was beaten just a length and a half in a tightly bunched field. He showed good acceleration there and that might be a key attribute in a race like this. He does look to need quicker turf to show his best, however.

Of the home team, Airoforce is the clear number one choice, according to the betting at least. Unbeaten in two so far, the second of which was a Group 3 win over the course in a key prep. There he got first run on and beat Camelot Kitten who, with a less exaggerated ride may have turned the tables. That said, Airoforce should be marked up for a wide trip throughout, and it is expected that the half furlong shorter trip is in his favour. But his times have been no better than his rivals, and he might just be a tad inexperienced for a race like this.

Hollywood Don is a big price with the UK bookies, at 20/1 as I write (having been 33/1 a few days ago). He was third in a Grade 1 on the dirt last time but prior to that had won three straight on turf, all at this trip, and all at Del Mar in Southern California. How he handles the cooler climate here is up for grabs, but he could go better than his British odds imply.

Conquest Daddyo’s win in the Summer Stakes at Woodbine was noteworthy for a couple of reasons. Firstly, it recorded the fastest speed figure of the domestics; and secondly, it was Daddyo’s first run on turf, having previously run twice on the polytrack at the same circuit. He could step forward again and, if so, would probably run best of the North American contingent.

Cymric, Hit It A Bomb, Shogun

On all known form, this looks Europe’s to lose. Cymric doesn’t have much in hand of Shogun, and the latter may be slightly fresher coming to this. Shogun is 9/1 while Cymric is 6/1. But the Ballydoyle first string, Hit It A Bomb may be better than both, albeit at a price that factors in a lot of improvement as a given.

At the prices, I think Shogun may be some value IF the going is good or better (track was ‘good’ as at Sunday 25th, but the rain has come). His Racing Post Ratings have improved steadily from run to run – 70 then 87 then 95 then 108 – and he has little to find with the 6/1 second favourite.

But on the soft side of good, I think Cymric might be worth taking a chance with. He won on soft at Sandown, though it was a race he was expected to win, and he’s by Kitten’s Joy, whose progeny have recorded nine wins and six further places from 34 runs on soft or heavy ground in UK/Ireland.

He’s been pushed out as a consequence of a wide draw, but no horse looks to be inconvenienced in a race unlikely to be fast run. He’ll be able to get the position he wants, most likely in mid-pack early.

Of the Americans, I backed Hollywood Don for pennies at 33/1 e/w, and I can see Conquest Daddyo running well. If it comes up soft, Camelot Kitten – another by Kitten’s Joy – could also run into the frame; but this could be set for an overseas raider.

If going is GOOD or faster:

If going is slower than GOOD: