The French challenge was headed by the Robert Collet trained SAINT FERMIN who started favourite after a comfortable win in Prix Carmarthen (Grade 3) here back in October where he had six of the day’s rivals behind him including second favourite ROLL ON HAS, trained by Jean-Paul Gallorini.

A steady pace was set by front running REVE DE SIVOLA, closely followed by stable companion AUBUSSON with Lizzie Kelly in the irons. Ruby Walsh on THOUSAND STARS was content to sit off the pace with favourite, SAINT FERMIN, who had been a little difficult at the start, settled in rear and travelling smoothly.

The race began in earnest rounding the final turn where Kelly was the first to make her move on AUBUSSON, kicking two lengths clear of REVE DE SIVOLA whose jockey, James Reveley, was now hard at work to maintain his position. Approaching the last, AUBUSSON still held the advantage but the Jean-Paul Gallorini pair ROLL ON HAS and HIPPOMANE were running on strongly either side of the leader whilst SAINT FERMIN, under Kevin Nabet, loomed up on the outside and looked to be going best of all. In behind, THOUSAND STARS was travelling well but still had three lengths to make up on the leaders.

Over the last, it was four in a line but SAINT FERMIN misjudged his stride, landed on the hurdle and crashed out of the race. Meanwhile, AUBUSSON and HIPPOMANE had kicked on with ROLL ON HAS a length down. THOUSAND STARS now found his turbo and Ruby threw all he had at him. Fifty metres from the line he still had two lengths to find but was gaining ground hand over fist. Up front, Kelly was getting the better of her battle with David Cottin on HIPPOMANE but it was ultimately to no avail as THOUSAND STARS came between the two horses to put his nose in front right on the line.

After the race, Walsh was full of praise for the old horse saying, “He ran a great race here in the Champion Hurdle back in June and we kept him in training all summer but there were no races for him over an adequate trip.  He’s been running over two miles to keep him fit and this was always the target. He travelled really well and he was just brilliant today.”

At the ripe old age of eleven, THOUSAND STARS became the thirteenth horse to win both major hurdling events at this famous track and joins the likes of Questarabad and Zaiyad who managed the double in 2007 and 2009 respectively.

Of the beaten horses, Lizzy Kelly was obviously disappointed not to have landed the spoils on AUBUSSON but was thrilled with his performance saying “Today has reinforced our confidence in him and I’m happy with the ride that I gave him.” He went off an unconsidered 45/1 on the Pari-mutuel and yet ran a blinder. SAINT FERMIN, sadly, did not get up from his heavy fall at the last. 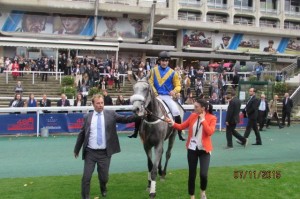 Punch Nantais with Bertrand Lestrade aboard

Also on the card, two Graded events for the younger generation. The French send their horses over les obstacles at the tender age of three and the Prix Congress (Grade 2, Chase, 2m2f) represents the most prestigious prize in that discipline.

The Guillaume Macaire pair PUNCH NANTAIS ridden by Bertrand Lestrade and BUDDY BANKS with Arnaud Duchene in the saddle dominated the race with the former and least fancied of the two just getting the better of his stable companion in a great tussle up the long Auteuil run in. There was just a head in it on the line and although delighted, Macaire felt that the second, BUDDY BANKS, may be the better horse suggesting that had they got to the front sooner, the result would have been different. 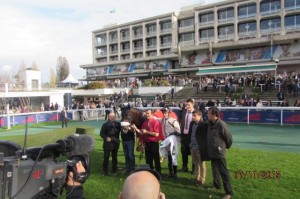 The Grade 3 Prix Bournosienne (2m2f) is another three year old event but reserved for fillies over hurdles. Guillaume Macaire once again provided the favourite, this time in the form of CARESSE D’ESTRUVAL, unbeaten in her last three starts. She had already beaten second favourite TRIANA DU BERLAIS in the prep race for this event in October. However, she could do nothing against her main rival as TRIANA DU BERLAIS led from start to finish, landing the spoils in good style.

Bringing You What You Asked For (Help Needed) Stat of the Day, 10th November 2015
Scroll to top