This was an all-French affair with defending champion MILORD THOMAS the strong favourite having proved his wellbeing in the Prix Heros XII (Grade 3, chase, 2m6f) at this course in October where he finished second over an inadequate trip giving lumps of weight to his rivals. In the plate, regular partner and four times champion jockey Jacques Ricou who was looking to lift this prize for the third time after MILORD THOMAS last year and  Golden Flight for Guillaume Macaire back in 2005.

Nine opposed with the principal contender and winner of the race back in 2013, SHANNON ROCK, trained by Jean-Paul Gallorini with David Cottin piloting. He also ran in the Prix Heros but could finish only fifth. He looked weak in the market, trading at around 13/2 and punters were looking for alternatives. They rounded on the horse that won that prep race, VEZELAY ridden by Bertrand Lestrade and also JEMY BAIE, the mount of Kevin Nobet, who had finished third. Both looked to be improving and offered good value at around 8-1 with the favourite trading at a miniscule 3/5 on the pari-mutuel.

Come the race, a sedate pace was initially set by KAHYADAM, winner of his last race and trained by Arnaud Chaillé-Chaillé. He was closely followed by VEZELAY and SAINT PALOIS, the mount of Englishman James Reveley and second in this race two years previously. The rivière des tribunes, a massive water jump in front of the stands, saw the first casualties with longshots VIEUX MORVAN and ROYAL ASTARANIA crashing out at the back of the field.

With no one really keen to go on, Jacques Ricou decided to let the favourite take the lead and consequently injected some extra pace into the race. At the gross open-ditch, JEMY BAIE was the next casualty leaving only seven standing with 4000 metres still to run.

With MILORD THOMAS now in command, the race progressed without incident but approaching the final bend, VEZELAY moved level with the leader and looked full of running. A couple of lengths down but still in contention SAINT PALOIS and SHANNON ROCK were also running on. At the second last, the double-barriere, VEZELAY and MILORD THOMAS rose together, two lengths back, SHANNON ROCK and SAINT PALOIS were in hot pursuit but Reveley’s mount hit the fence hard and briefly lost his balance.

Approaching the last, MILORD THOMAS and VEZELAY were still neck and neck. The favourite moved to the stands side whilst VEZELAY stayed up the centre. Over the last and Jacques Ricou threw everything at his charge and he duly replied. VEZELAY was also answering his jockey’s desperate drive but started to weaken and it was SAINT PALOIS and James Reveley who were running on the strongest, passing VEZELAY in the last 50 yards but just failing to overhaul MILORD THOMAS in a final lunge for the line.

Jacques Ricou, when interviewed, although ecstatic, declared “J’ai eu une course de merde!” (I had a terrible race) referring to the fact that he had had to make the running and that this hadn’t helped his mount. Ricou later received a 12-day ban from the stewards, not for his colourful language, but for having used his whip more than 18 times during the race.

His trainer, Dominique Bressou, was more philosophical saying, “We were the favourite and it certainly isn’t the job of the other jockey’s to help our cause. Jacques was therefore obliged to take the lead much sooner than we had wanted but it all worked out in the end and it just proves what a good horse he is!”.

MILORD THOMAS, a son of Kapgarde, has now run in four grade 1 races and won them all. He became only the sixth horse to complete the Grand Steeple Chase/Prix la Haye Jousselin double in the same year. He also emulates the likes of Remember Rose and Rubi Ball to become a duel winner of this great race in consecutive years. He is still only a six-year old and time is distinctly on his side.

Connections of SAINT PALOIS were obviously disappointed. James Reveley was adamant that if his mount had put in a clear round, the result would have been different saying, “We had a good lead from the favourite but he hit the open-ditch and missed the double-barriere. Without those mistakes I’m sure we would have won.” His trainer was equally frustrated stating, “We were very confident coming into the race as we knew he had improved from his last run. He’s come very close and although we are obviously pleased with his performance you can’t help but rue the mistake at the second last that probably cost us the race.”

VEZELAY was contesting his first grade 1 event and ran a great race. Trained by Emmanuel Clayeux he is obviously on the upgrade and future tussles with MILORD THOMAS look more than likely over coming seasons. SHANNON ROCK again ran with credit, finishing fourth but a long way behind the first three. 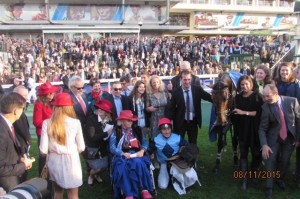 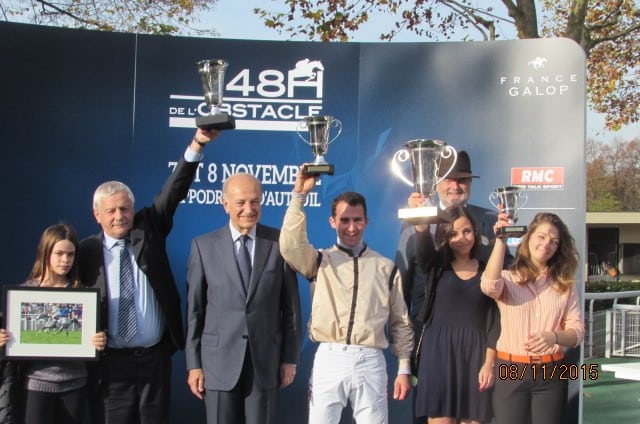 Earlier in the day, Guillaume Macaire was again in the spotlight as he trained red-hot favourite DEVICE for the first grade 1 event on the card for the Prix Cambacérès (hurdle, 2m2f) for three-year olds. The son of Poliglote was trading at an astonishing 1/5 on the pari-mutuel and was on a seven-timer having beaten all his main rivals here on the way. In the hot seat, regular partner James Reveley sporting the famous silks of Magalen O. Bryant, owner of future big race winner MILORD THOMAS.

His principal opponent came in the shape of the filly, CHIMERE DU BERLAIS who he beat comprehensively in the Prix Georges de Talhouet-Roy the previous month. However, from the outset, the race didn’t seem to be going to plan with the filly quickly taking the lead and jumping with great enthusiasm. DEVICE lay just off the pace and as they swung into the home straight, he still looked dangerous but, up front, the filly, ridden by Ludovic Philipperon for trainer Robert Collet was not stopping. She jumped the last full of running whilst two lengths back, DEVICE made a bad mistake and was then hampered by the eventual second INDIETIR. CHIMERE DU BERLAIS went on to win by a convincing 5 lengths with DEVICE not able to recover from his blunder at the last finishing third.

This was a welcome recompense for Robert Collet, who saw his stable star SAINT FIRMIN perish at the last in the previous day’s showcase the Grand Prix D’Automne. When interviewed, Robert Collet, better known in the UK for the exploits of Last Tycoon and Whipper on the flat, stated “I’ve been training horses for 43 years and in this game you have to take the rough with the smooth. Yesterday was an emotional day for all the family as my wife owned the horse and my daughter rode him in his work. Today, with this horse, we decided to employ more forceful tactics than for her previous outing and she really enjoyed being out in front. Her brother was good over fences so hopefully she has a bright future.”

Revenge of sorts was in the air in the next big event the Prix Maurice Gillois (grade 1, chase, 4yo) where James Reveley was again on show riding SO FRENCH, a full brother to DEVICE, the defeated odds-on favourite in the Prix Cambacérès. The betting however, strongly suggested that he would be playing second fiddle to his stable companion and favourite KOBROUK, a son of Saint des Saints and comfortable winner of the grade 3 PRIX ORCADA in October. This time, though, it was Reveley who was on the surprise package as SO FRENCH answered his every call in another desperate run to the line. KOBROUK with Kevin Nabet in the driving seat fought all the way to the line and it was only in the final 50 yards that SO FRENCH eventually got on top to win by a length.

When interviewed, Macaire was still seething about the previous race where DEVICE was hampered at the last and failed to run his race. However, he was more than happy with the run of SO FRENCH who had suffered a hairline fracture a year ago and had been off the course for some time. This was only his fifth career run and his first win in a grade 1 event. 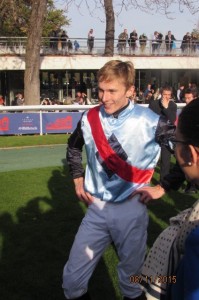 For James Reveley, this was indeed sweet revenge for the performance of DEVICE in the previous race and after his second on SAINT PALOIS in the Prix la Haye Jousselin, represented a very profitable day to boot. (He also won the last race on the card). He is becoming a regular visitor to these shores and is supported by some of the biggest trainers. It is a surprise that he doesn’t get more opportunities in England. Perhaps after a good showing in a high-profile meeting such as this, that might change.

[Nigel is geegeez.co.uk’s Parisian correspondent, and writes regularly around the big race meetings, both flat and jumps, in France]