You might notice over the coming days a few new bits and bobs appearing on geegeez.co.uk. Nothing earth-shattering or, more pertinently, experience-confuddling; but interesting steps forward nevertheless.

The first is a slightly different home page look. Truth be told, I’m still not happy with the home page layout. I’m finding it difficult to marry the various elements – latest news/posts, tips, today’s cards and results – with telling new visitors about geegeez.co.uk and what it has to offer.

The new big slider top left is a step forward on the smaller icons (I think), albeit at the cost of masking some of the posts from immediate view.

The good news on that score is that it is relatively easy to change things around, hence why you may have seen a few variants of the home page in recent weeks.

It is probably fair to say that there will be a few more before the job is satisfactorily completed, but be assured that navigability will remain paramount, meaning you should always be able to get straight to where you need to be.

In terms of new content, we’re now very close to adding a few extra fields to our reports. Specifically, we’ll be publishing two measures of statistical significance on the right hand side of reports. They are Actual / Expected, and Impact Value.

You’re forgiven for not knowing (or caring) what these are, but for a few – to begin with and, I’d imagine, a few more over time – these add a dribble more meaning to the raw numbers displayed in the reporting output.

Actual vs Expected is a barometer of the implicit value in a certain dataset: in other words, is this ‘thing’ performing above or below market expectation. Impact Value is a measure of how much more, or less, than the norm a certain ‘thing’ is happening.

Put another way again, A/E compares an element in isolation against the market; and IV compares the element against its peer group.

Let’s take an example [click the image to enlarge] : 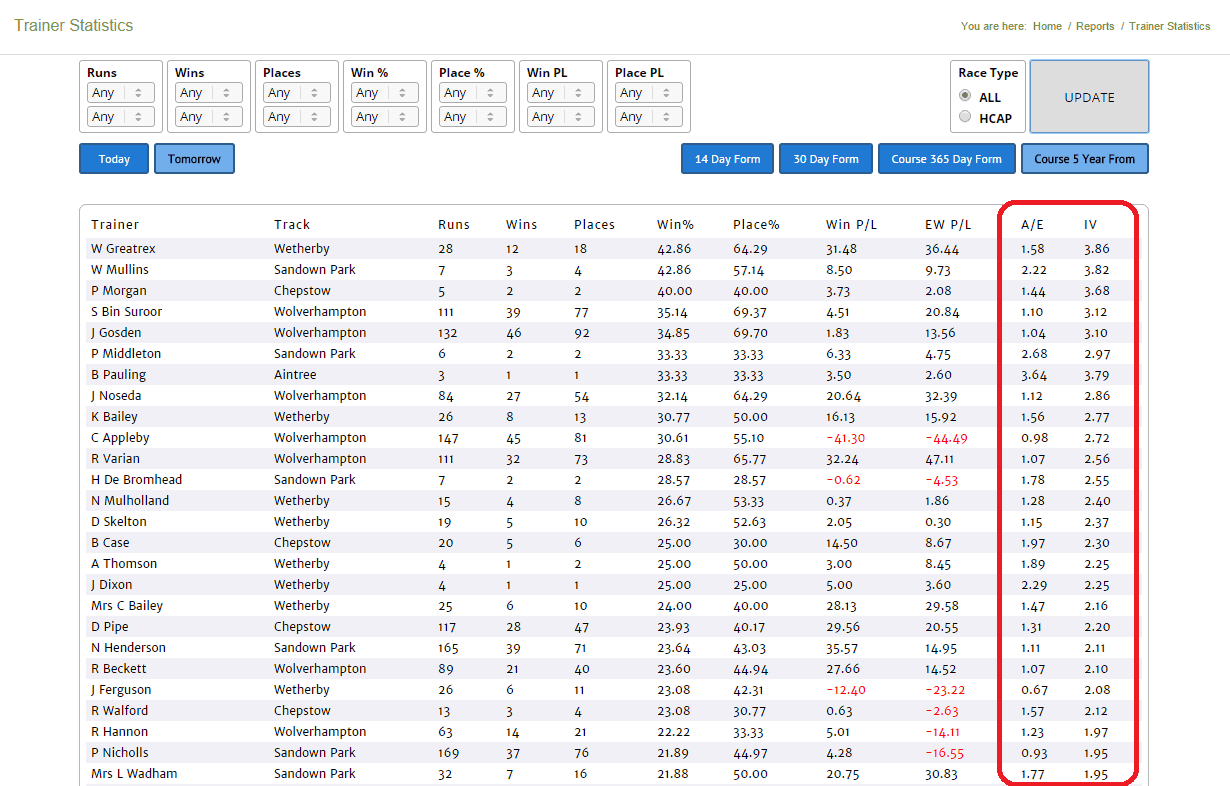 In the image above, a view of trainer form over the last five years by course, the top line shows Warren Greatrex to have won 12 from 28 at Wetherby during those five years. His A/E score of 1.58 means his runners have out-performed market expectation by 58%. That is, they can be argued to offer very good value.

The IV score of 3.86, which was the highest on the day – the table having been sorted by IV – means that Greatrex runners at Wetherby have won almost four times more often than might have been expected, based on a comparison with all winners at the track during that time.

If all that is as clear as mud, don’t worry. There are two things to note:

Finally, keep in mind that the smaller the dataset, the lower the confidence (and the more likely that something has happened by chance). In the above image, then, we might be more confident about Nicky Henderson’s runners at Sandown than Ben Pauling’s at Aintree, based on the sample size – i.e. number of runners – in the report.

This content should be featuring on the trainer/jockey reports either this week or next, so stay tuned.

Actually, no. Old markets, but new ones to Geegeez Gold. We’re currently working on loading up historical Betfair Starting Price data for our entire database of results going back to the beginning of 2009, circa seven years now.

Once we have that in situ, we’ll be able to do all sorts of things, probably starting with P/L calculations on reports based on BSP less 5% commission.

There’s no ETA for that as yet, but it’s another thing which is close, and which will provide further depth to the reporting content.

For a very long time now – way too long, in fact – the page that displays when a geegeez visitor clicks ‘Join’ on the menu (or gets redirected to when clicking on Gold content) has been unfit for purpose. In plain English, it hasn’t well enough explained what Gold is, or why a visitor might be interested in it.

At last, we have something a little more compelling and, mercifully – for me at least! – a little easier on the eye.

The new ‘Join’ page is here. And not before time.

So, as I said, a few bits and bobs have either arrived on site or are in transit. 2016 is going to be huge from a Gold perspective, and I’m more excited than I’ve ever been about where we’re going to be taking things. By the end of next year, it’s my intention to have THE BEST race cards and form tool provision in the country. Naturally enough, you’ll be the judge of that. 🙂