Despite being nine days into 2016 by the time Chepstow’s Coral Welsh Grand National will (hopefully) be run this Saturday, the winner will be crowned as the 2015 champion, the race having been postponed from its original late December slot due to waterlogging.

The going will be heavy, and Welsh tracks really do mean it when they call their courses hEaVy, so big-footed mudlarks should be aforethought.

Before wading – almost literally – through the form, let’s scout the trends of recent years taking a degree of care not to mislead with coincidence.

Using the excellent horseracebase.com, whose big race trends database runs back as far as 1997, that gives us eighteen years of data with which to play. Ten of those eighteen renewals have been run on heavy, including all of the last four and five of the last six; so we’ll pay close heed to recent patterns on similarly stretching sod.

A high recent placing has been a very solid portent to Welsh National glory in recent times. Eleven of the last eighteen winners were either first (six) or second (five) last time, with a further five running third (one) or fourth (four) that last day. To put that into context, bang on a third of the runners finished first or second on their prior start, but contributed over three-fifths of the winners. They also chipped in a 23.83 unit profit at starting price. Nice. And 89% of winners came from the 59% of runners to have finished 1-2-3-4 last time out.

To corroborate the win data, 44% of all Welsh National placed horses since 1997 finished in the gold or silver medal spots last time, from those same 33% of runners. And, from the 59% of runners involved in a notional superfecta (top four) on their prior start, they made up 76.5% of the placers.

Whereas in some Nationals, a non-completion last time can be overlooked, history paints a bleak portrait here: none of the 48 horses to have fallen, unseated, pulled up or been carried out on their previous run was able to win, and just four made the frame (6% of the placers from 16% of the runners). Which is a pity because my helicopter swipe at the race honed in on Portrait King (fell last time) as a possible big-priced play.

Six- to nine-year-olds have outperformed their numeric representation by some way. 309 horses have contested the Welsh National since 1997, and two-thirds of them (205) were aged seven, eight or nine. They won all bar two (89%) of the renewals in that time, and also took out three-quarters of the available places. The other two wins, and seven of the other 17 places, went to six year olds, who also significantly surpassed numerical expectation.

Collectively, horses aged between six and nine won all 18 events in the sample period, and took out 85% of the place positions, from just shy of 75% of the runners.

On heavy ground, look for a horse lugging less than eleven stone. Weight stops trains they say. Well it certainly seems to stop Welsh National runners on heavy. Although there was a handful of winners carrying around eleven stone or more during the research period, in the ten renewals run on heavy only one horse shouldered more than 10-08 to victory.

That was the magnificent Earth Summit back in 1997. He went on to win the Aintree Grand National in 1998, having already claimed a Scottish National in 1994. [Aside: That was a very significant Aintree National winner for this then potless student, and I retain fond memories of riding him around the living room at some fair crescendo.]

Looking at those factors as a micro-system – heavy ground, top four last time, aged six to nine, in the handicap but carrying 10-10 (a couple of tins of beans above the 10-08 mentioned, wriggle room) or less – produced some rather gratifying results for anyone sufficiently clairvoyant to have known this just shy of two decades ago.

47 qualifiers recorded nine wins and another nine places. The winners were worth 60.33 points profit at SP at close to a 20% strike rate. The 38% each way hit rate yielded 80.41 points of profit.

This year, one might note the following who appear to fit the bill at time of writing:

In the last six years, five of them when the race was on heavy ground, nine of the twelve horses to run first or second had either led or raced prominently throughout. The below offers an idea of those horses that might race prominently this time: the higher the score the better the likelihood of a bold showing, based on recent history. 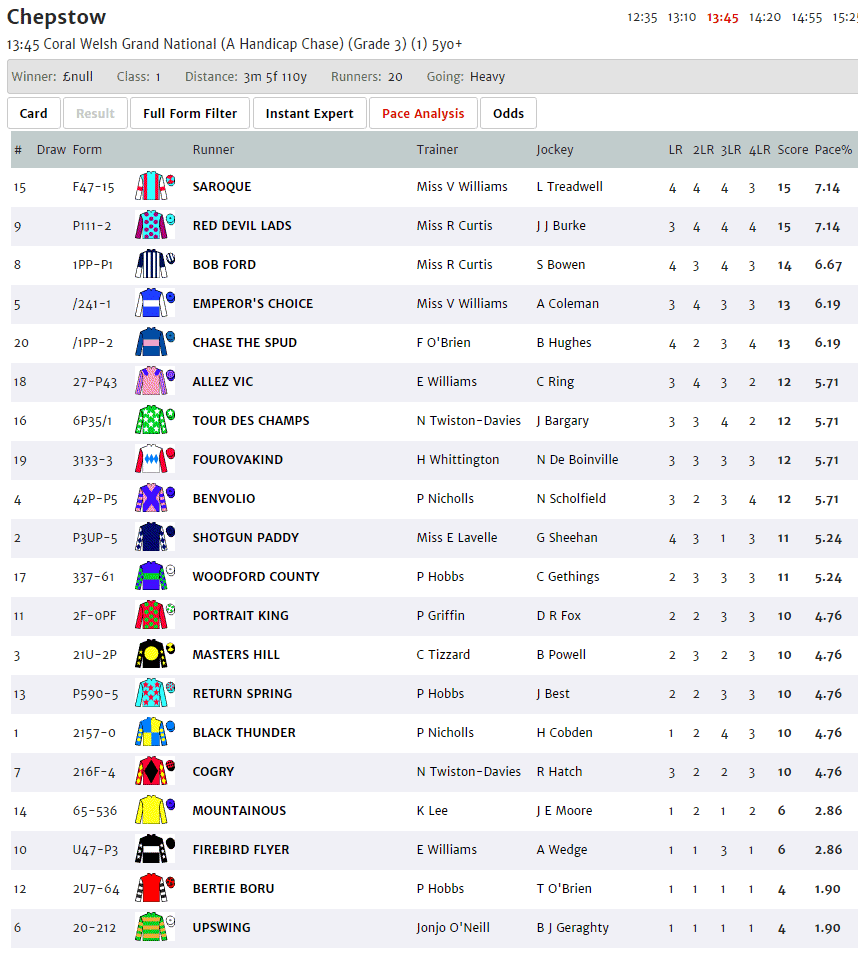 At time of writing (Thursday evening) there are still 30+ engaged, that number due to be reduced to 20 plus reserves on Friday morning. I’ll keep my focus to the top 25 for two reasons: 1. those lower probably won’t get in, and 2. I quite like horse number 25!

Here’s how the Instant Expert shows the form, first looking at wins only, and secondly at placed efforts. Click the images to make them legible. 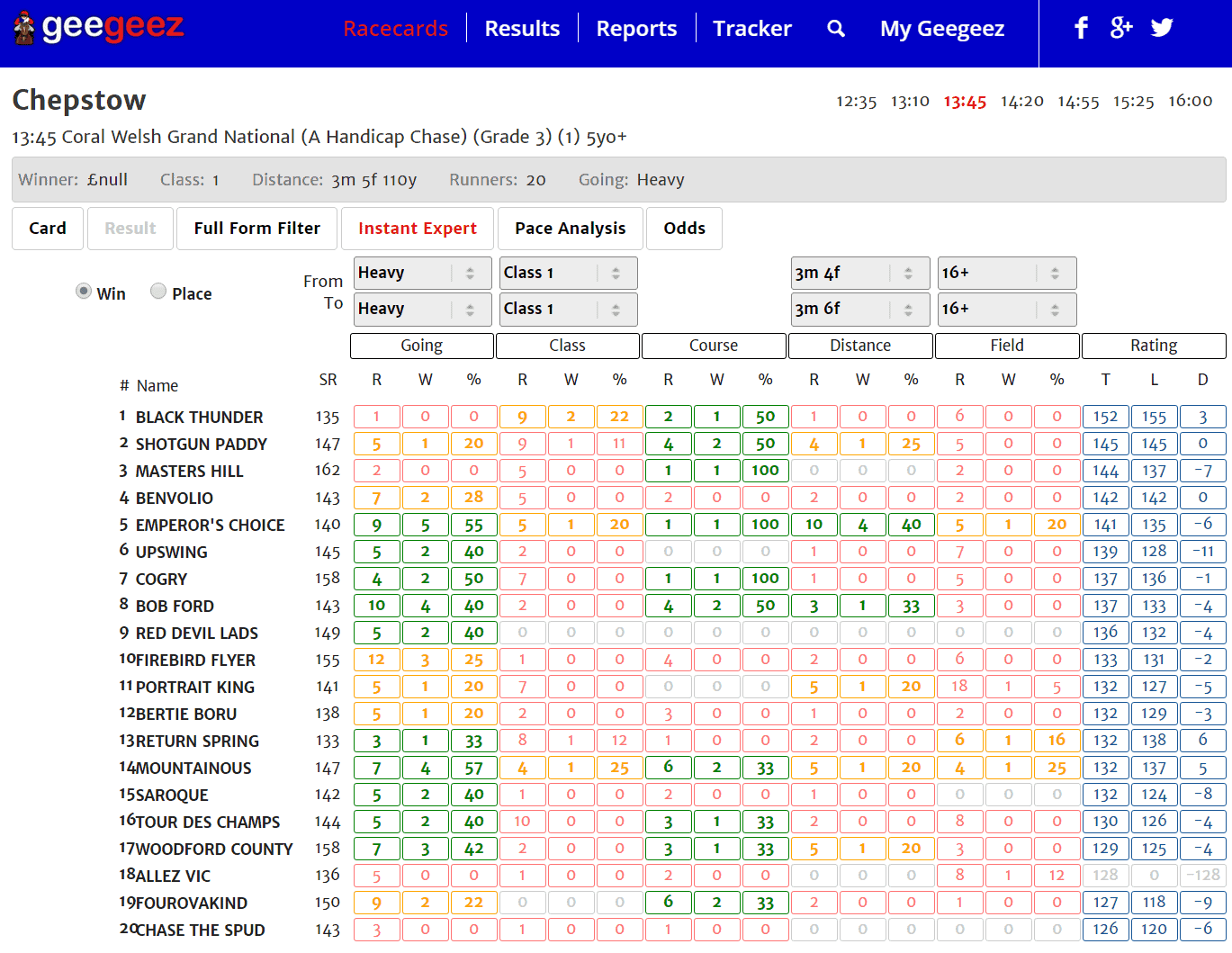 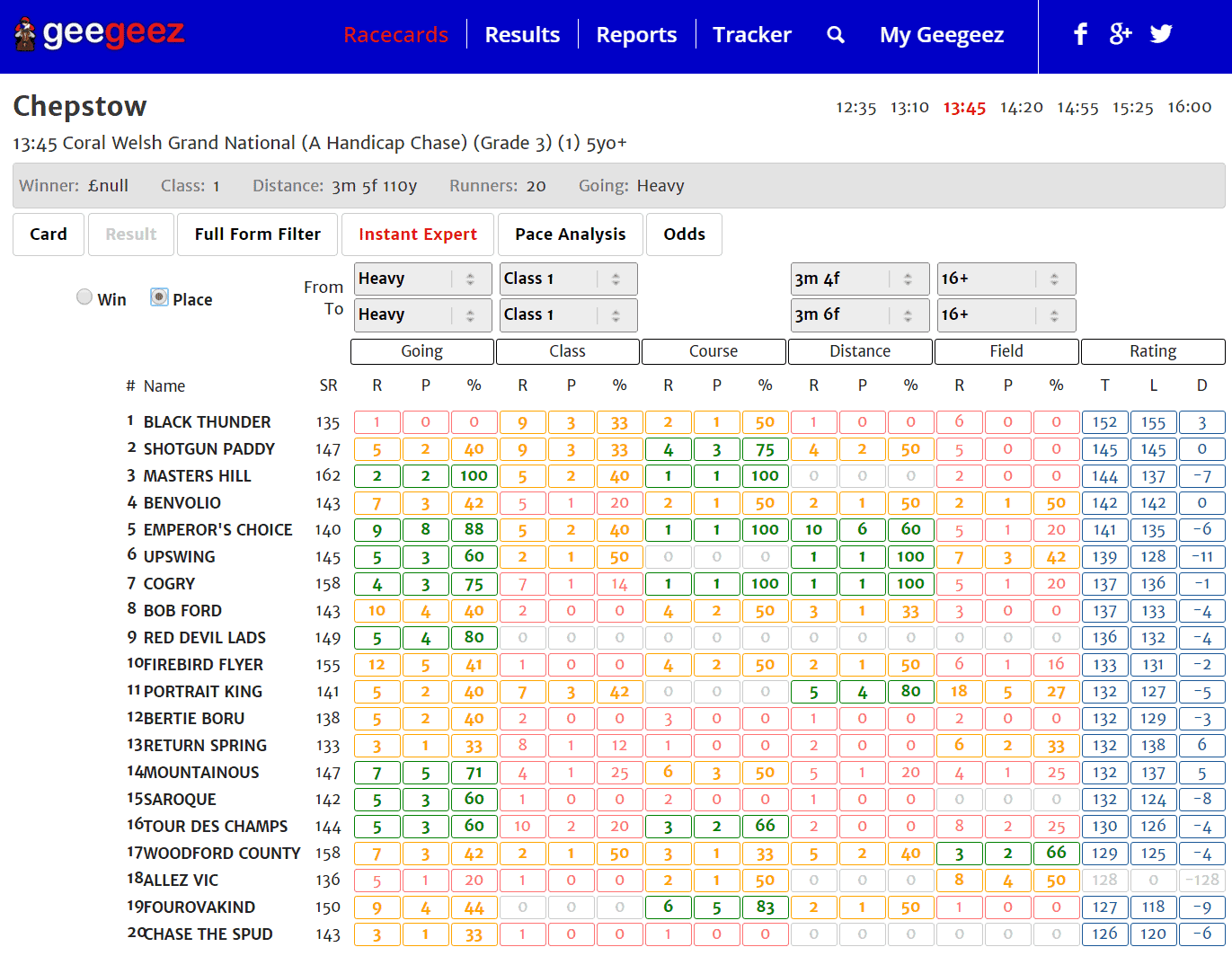 For the newb’s, you’ve hopefully cottoned on that green is good, amber all right, red not good, and grey means there’s no data. For the colour blind, the numbers in the boxes (which are sortable in the tool) give a – granted, slightly more laboured – clue.

What can we tell from the above?

Cogry is vying for market leadership, and for good reason. From the same stable as Earth Summit and Bindaree, both winners of this and the Aintree National, Nigel Twiston-Davies will be hopeful he has a third prospect for that valiant double. Seven years old and set to carry 10-11 makes it a feasible challenge, as does a three mile course and distance chase win on heavy ground.

He’s very fairly weighted and my sole reservation is that he might just get too far back in a race likely to be run at a solid clip in the conditions. At 7/1, that’s enough for me to let him beat me if he can.

Mountainous and Upswing are both 8/1 chances, the former having won this – when tipped here, whoop! – two years ago. Trained now by Kerry Lee, daughter of Richard, he returns to the party on an ostensibly fair mark of just 132 – won this off 137. But we know the record of older horses and Mountainous, now eleven, has regressed since winning in his pomp. From a sentimental perspective, he’d be a lovely winner, but he pulled up in the race last year, and he was beaten by some proper paddle steamers at Sandown last time.

Jonjo O’Neill has won this twice since 2002, first with Mini Sensation and then, in 2011, with the ill-fated Midlands National, Lexus Chase and Gold Cup-winning Synchronised (I loved that horse 🙁  ). As such, his Upswing commands respect. But the eight year old is a son of Beneficial, which gives me reason to trot out one of my favourite breeding stats…

Beneficial has sired just one winner beyond 3m4f from 84 to go to post. Of Upswing’s dam’s other offspring, the one winner (from three other runners) has scored three times at 2m4f, and the other two have been useless at no further than 2m4f. With his hold up style a negative as well, it’s a no from me.

It’s very hard not to like Emperor’s Choice, an old school centre forward of a racehorse. Blood and thunder is his metier, and he comes here in belligerent form, seeking a remarkable hat-trick that began with a top corner screamer in this race last year. That was all out heroic stuff, and you wonder how many of those any animal has in the locker before the head usurps the heart.

If he’s still game, there’s a hell of a lot to like about his chance – proven in conditions, trip and track no issue, prominent racer, elevated a viable six pounds for his last win – and he makes my ticket.

The next few in the betting are Shotgun Paddy, Tour Des Champs and Theatre Guide. Shotgun Paddy won a staying handicap over this distance at Warwick in 2014 and was third in the same race last year. But he’s been in and out – mostly out – in marathons since, including when pulled up in this last year.

The seven year old Tour Des Champs pulled up in this behind Mountainous two years ago, but the nine year old has come back in fine form judged on his Welsh National Trial win here last month. That was off a near two year break, and one wonders about that impossible-to-quantify ‘bounce’ in a race of this nature. He’s got a cracking weight and has fewer miles on the clock than many after his absence, so if there are no invisible holes he’s a player and 12/1 will have takers. I’ll pass though.

Theatre Guide ran a fine race in the Hennessy (2nd, tipped here) but his jumping was scrappy. I’m not at all convinced he’ll stay, and his hold up style isn’t for me either. He’ll probably saunter home now, but I don’t like his chance at all.

Of the bigger priced beasts, Red Devil Lads is on a roll. He’s won around Exeter and Ffos Las Vegas, both on heavy ground, and might well have been tapped for toe around the sharper confines of Ludlow last time. If that’s right, then he comes here with a solid chance. Upwardly mobile, representing a trainer in form, proven in conditions and looking every inch the stayer, 16/1 is a bet (despite him being by Beneficial – he’s twice the price of Upswing and has looked a more gritty stayer).

Another obvious one – to me at any rate – is Woodford County, the number 25 alluded to earlier [now number 17 in final declarations]. Philip Hobbs has a great record in this race and is having a season of seasons. This lad won over a quarter mile further last time at Exeter (heavy) so there are no stamina qualms in his corner. Up just four pounds for that effort and set to race off 10-03, I expect him to perform better than your average 20/1 shot. That said, I’d hold fire until the final declarations are down, in case he misses the cut. [STOP PRESS: He gets a run!]

If you want to tilt at a windmill – why not eh? – you could do worse than Portrait King. Aged eleven, and a faller last time, he’d be an ultimate stat buster, but he was running a bloody big race in the Becher when coming down at the second last and, for my money, was the only credible danger to the winner at that point.

A belting renewal and it is to be hoped, with a menacing weather forecast, that racing goes ahead. If it does, wellies will be the order of the hour. I’m siding with a piece of Emperor’s Choice, win only: he’s a gladiator and he’s up to this task sans question.

To that I’ll add a couple of each way tickles in Red Devil Lads and Woodford County. I’ll probably lob the price of a pint – which is quite a lot in this increasingly Bohemian enclave of inner London, so more likely half a pint each way – at Portrait King, but will not officially ‘tip’ him here. Caveat emptor, and all that.

If betting the Welsh National each way, look for a bookmaker paying five places – they will be from Friday afternoon I expect.