We’re now just two months away from the most anticipated racing event in the calendar, the Cheltenham Festival. Two months away and we haven’t featured a single ante-post preview for the great meeting… yet!

Starting next week, we’ll look to put that right with stats, trends, and form analyses of some of the biggest races. And, to set the tone for that, in this post I’d like to share my own ante-post portfolio so far.

It’s fair to say that I’ve not got heavily involved yet – actually, I never get hugely involved as last year’s equivalent post attests. Indeed, as you’ll see, I’m yet to strike a bet on anything for Day 4. This is historically the toughest day and my usual modus operandi is to try to get a result on either the Gold Cup or the Foxhunters’, acknowledging that the rest of the card is for bookmakers and lucky home run-hitters.

I’ve had a couple of swipes at the Champion Hurdle, one in particular. As everyone knows, this race is essentially Faugheen’s to lose and, whilst I had a nice 8/1 voucher on him last year, he’s making the market for another I like this time.

The horse in question is Identity Thief, who I backed the Monday after his game Fighting Fifth win at the end of November. He was 33/1 then, and I took a little flyer – win only – for £21.25. Due to my early wager, the bet was made before Skybet introduced their Non-Runner No Bet (NRNB) concession, so I’m all in run or not.

I then took part in a little video chat, recorded here, where another panellist, Cathryn Fry, made a robust case for Windsor Park. He was a good winner of the Neptune last year and that race is a very good portent to the Champion Hurdle (won by the likes of Istabraq, Hardy Eustace and Faugheen). So I had a cheeky tenner each way at 25/1 NRNB.

He’s since run lamentably behind Nichols Canyon and Identity Thief on heavy ground, and it’s probably fair to say he hated the mud, despite getting away with similar against far inferior opposition earlier in his career. Whilst I expect him to be a different kettle of fish on quicker, he does have something to prove. Saying that, 50/1 NRNB with PP is not the worst windmill tilt in the world, as it seems something of an overreaction to a run for which there is a reasonable excuse.

That race saw Identity Thief give Nichols Canyon a big scare and further narrow the gap between himself and the top table of Champion Hurdle aspirants. So I went in again, this time for £25 each way at Victor’s 20/1 offer. The Thief is no bigger than 14/1 now in a market almost bled dry of value.

Whilst there might be something in taking a tiny sliver of a big price NRNB, realistically it’s more sensible to wait for Festival week and load up on the inevitable avalanche of Day One concessions (if/where you can).

I’m a sucker for a flat horse going hurdling. It almost always ends up costing me cash at the Fez, but here I went again, allowing my eye to own my wallet for a short time and a small stake in relation to a horse called Penglai Pavilion. Rated as high as 118 on the flat – most hurdlers don’t get to that rating! – after a nine length fifth to Treve in the Arc, Pengy ended up romping round gaffs for John Ferguson’s Bloomfields operation, and doing it with a majesty that hinted he might be able to take on all comers.

That impression was revised after an abject third of four at Cheltenham in mid-November. Pengy has not been sighted since, and who knows where he goes next? The good news for my £30 win at 20’s is that the Pavilion has an entry in the Neptune, the race for which I’d bet him. The bad news is that he’s probably not nearly good enough, a statement lent credence by the fact he’s currently twice the odds I took in a place – and I wouldn’t think he’s huge value at that, with no obvious reason for the poor show that last day.

In the very next race, I’ve gone in twice with another nag. Like Identity Thief, I took a small early view on Native River for the RSA Chase after he ground out a second chase victory in a Grade 2 at Newbury. A score at a score was taken, or £20 at 20/1 if you’d rather.

He’s since run in the Feltham, a speed test which bears little relation to the RSA, a fact under’score’d by the lack of a single Feltham winner on the RSA roll of honour. Beaten horses from the Feltham – often outpaced like Native River, who ran third – have a very good record in the stiffer examination of stamina in March. So I had another cut at the Native, this time taking £25 e/w at 33/1.

He’s a top priced 25/1 now and, though some believe he’s too slow for an RSA (and may be right), I take the view that horses like Bobs Worth (3rd, beaten five lengths, to Grands Cru in the Feltham) and Trabolgan (2nd to Ollie Magern) were too long in the betting subsequently, having run perfectly respectably in sub-optimal conditions.

Of course, I am twice invested in that view being correct! At least history offers hope, and 25/1 is certainly not the worst wager at that price on this year’s Festival.

Wednesday’s race five sees my biggest bet of the Fez so far, £200 at 4/1 on Josies Orders (these apostrophe abusers are rife in horse naming circles) in the Cross Country Chase. Regular readers will know I’m a big fan of the race, both as a spectacle – it’s something different – and as a betting medium.

Usually there is only a handful that can win and this year looks a case in point. Josie is a big improver in this sphere, having fallen on his Enda Bolger debut in the La Touche Cup last April. He was moving like the winner there, and made no mistake in a similar banks race two days later.

A pipe opener over hurdles at Galway has set JO up for a brace of wins over course and distance, first when chucked in in a handicap, and latterly when a stone higher in a conditions event. The Festival Cross Country Chase will be run as a conditions event rather than a handicap for the first time this year, meaning plenty of horses will be horribly inconvenienced by the impost of (largely) level weights.

As things stand, Balthazar King looks a fly in the ointment, the now twelve-year-old having to prove his fitness after being absent since a very nasty tumble in the Grand National, from which he looked at one point as though he wouldn’t pull through. He was indeed a king of a horse and, if returning in the same form, he’s a standout danger in a shallow-looking race.

I’m no fan of Quantitiveeasing, a horse who – based on recurring market sentiment – clearly has ability, but who fluffs his lines with bankrupting regularity. He did win the Risk Of Thunder Chase last time, almost by default in a pathetic race. Wullie’s On His Own was 13/8 favourite and dogged it completely, and second placed Love Rory has shown twice that he’s no yardstick for Cheltenham’s Cross Country heat.

In any case, I think Josies Orders was a cracking bet at 4/1 and remains a fair bet at the current top price of 3/1. If he gets there in one piece, he’ll surely be around 9/4. if BK absents, he might be nearer 7/4.

Just one bet, another flyer. This time I took the view that Shaneshill was close to a penalty kick in a two mile Naas novice chase twelve days ago. So I backed him for the JLT at 8/1 for £30.01 (I like to clear my accounts down to round numbers – don’t ask!).

Despite jumping sketchily and having to be fairly well cajoled, he got it done and will be seen to better effect over a longer trip and on better ground. At least I hope that’s true because my bet is for a 2m5f race which is normally run on better ground.

Second to Douvan in the Supreme Novices’ Hurdle last year, he looks very likely to dodge that one this time and is now a top-priced 5/1, 4/1 generally, for the JLT. That’s too short in my opinion because he needs to improve his fencing, but 8/1 is too long. A whiff of value in a race where his own stable has plenty of options.

To Win Any Race

I’m a very big fan of this William Hill market and have looked at it numerous times over the last couple of months. In the event, I’ve only determined one horse to be value – so far – and that was Sizing John at 10/1, of which I took £30 worth.

He had a long lingering look at Douvan’s derriere againagainagain in a Leopardstown Grade 1 last time, and he’ll surely swerve that fate at the Festival and run in the JLT. Nevertheless, he’s priced at 20/1 for the Arkle and 14/1 for the JLT; and he’s still 10/1 to win any race with Hills.

If he goes the JLT route, I think he has a sniff, and 14/1 with Paddy is all right each way. But I’d be pretty unexcited about getting a draw off my wager here, despite the better ground improving his chances a trickle.

Two gloriously guessy months where many of us will add further ballast – or bubble gum – to our ante post ledgers safe in the knowledge that, granted a run, where there’s light there’s hope. Oh happy day. 🙂

p.s. here’s the spreadie as it is just now. 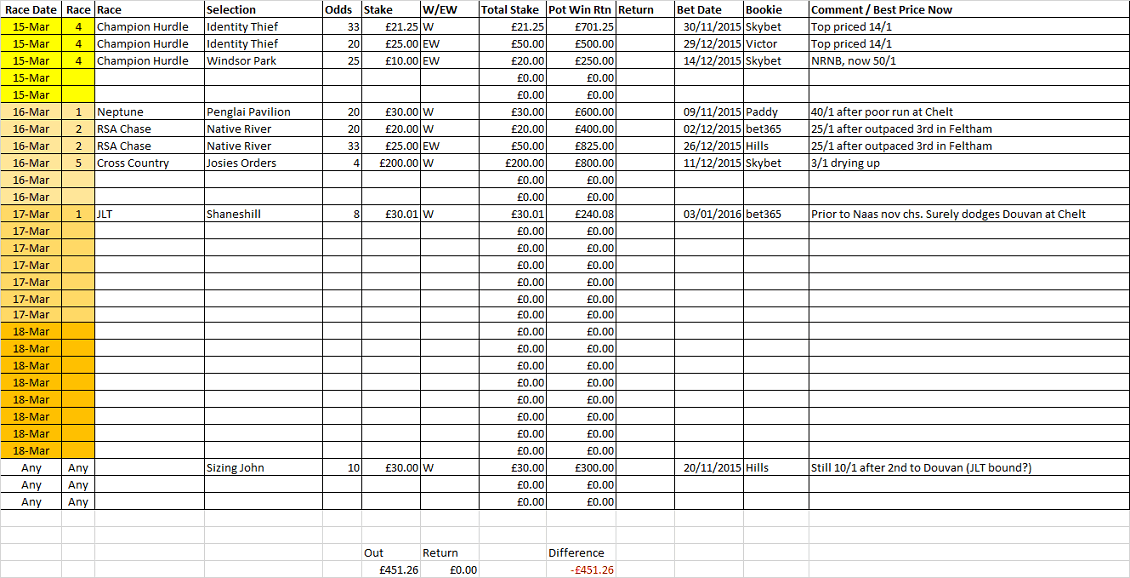