In the latest of our occasional series about racing people, we take a look at the work of Mark Johnson, racecourse commentator, writes Ian Sutherland. Today Mark explains how he became involved in racing, how he goes about preparing to call the horses at a race meeting, and the tools of his trade. Tomorrow, Mark talks about the skill of commentating, and recalls some of the races he’s particularly enjoyed commentating on.

A windy day in Doncaster proved the ideal opportunity to meet up with Mark Johnson and talk about his work as a racecourse commentator. We first discussed the idea when we bumped into each other at Kelso last summer, but it took five months for us to manage to bring it to fruition.

IS: Mark, when did your interest in racing begin?

I always loved horses and watching on a black and white TV at home with mum and dad. I don’t come from a racing family at all. Dad learned to plough in the second world war and my grandad was in the Cavalry before then. I said to Mum and Dad that I’d love to go and watch the horses. Coming from Skegness they could have taken me down to the donkeys on the beach but they took me to Market Rasen and the old Southwell when it was just a jumps course and I fell in love with it.

Did you ever go racing at Lincoln?

No, I’ve seen point to point racing at the Carholme, but I’m not quite old enough to have seen actual racing there.

How did you get into working as a commentator?

I always wanted to do this job. My initial ambition was to be the Boxing Day or Easter commentator at Market Rasen, my local track. I was very blinkered. I was born in 1966, though I do insist that in 1967 I remember the Foinavon pile up in the Grand National. I know that in truth it’s a memory borne out of television replays.

I’d be eating fish fingers, chips and peas watching Saturday afternoon racing, and the old ITV7, picking out the horses on a black and white. When I was about five or six I probably drove my parents mad by insisting on turning the volume down and having a go myself.

In time I sent off loads of cassette tapes of me doing commentaries, but it was very difficult in those days to get into the organisation for commentators (Racecourse Technical Services). They were older gentlemen who had a background in the Army or the Civil Service and it was going to be impossible to break in very early. I went away and did a degree in television, film, theatre and drama to learn how to make TV documentaries, to project the voice, and how to memorise things; all with a view to what I’m doing now.

In my second year at college I got the opportunity to do a live point to point commentary, and it all went from there.

You work as one of a team of commentators for Racetech. What’s the set up?

Effectively there are about 20 of us on the rota   To be a professional racecourse commentator you have to be on the books of Racetech. We give them our availability and they send us wherever. It’s been done like that for years and years. Some of us do other things as well. We are all on freelance contracts, so some like Stewart (Machin), Richard (Hoiles) and myself tend to do a bit of television, but Racetech is my core work. I do 90 or so days each year for them. 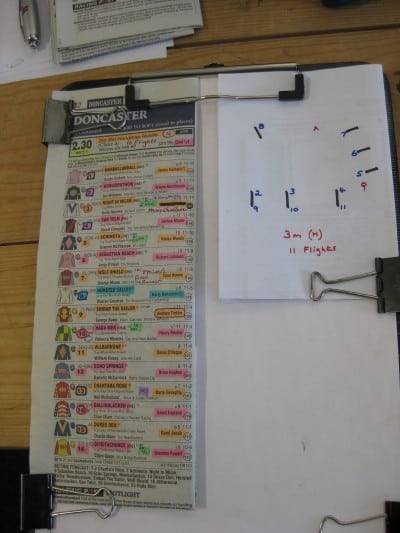 IS: How do you prepare for a day’s racing?

Most of the morning I spend colouring in the Racing Post! I’ve got a complicated highlighting system which shows up all kinds of information that’s there in words, but I need to be able to pick up at a glance. Apart from the obvious things like whether a horse is a colt, gelding, filly or mare, and how many races it’s won, I’ll also mark up lots of snippets of information about the horses, jockeys and trainers that I might be able to use in the build up to a race, or when they are actually running, especially “firsts”: horses having their first run over hurdles or fences; at a particular course or distance; that have moved to a new trainer. I need to be able to say which horses have run well at the track.

Separately I log any trainers or jockeys that are approaching a milestone. Right now I’m on countdown to Richard Johnson’s first seasonal 200 (Ed – now achieved). Jockey kit sponsorship logos can be surprisingly helpful to identify who’s who when the horses are running away from you and you can’t see so much of the colours.

Then, when the horses are in the paddock before a race I’ll jot down any distinguishing features they have; a white blaze; white socks; a runner that’s bandaged, or has its tail done in a particular way.

I also prepare a chart of the track layout, one for the hurdles and one for the chases, showing just where on each part of the course they are. Naturally, that’s colour coded for plain fences, open ditches and water jumps.

I watch Mark in action here. While the horses are in the paddock he goes through the card in race order, quietly saying aloud to himself the name of each horse, twice. Where it’s appropriate he adds, blinkers, blue hood, now wearing claret and blue quarters, and so on. It’s all done to a rhythm. As each horse leaves the paddock he announces racecard number, name, colours, and jockey. It’s what all commentators do, explains Mark. As well as informing racegoers, it acts as a final fix in his mind.

IS: There’s also a technical side. Do you have much to do with that?

MJ: That’s all here when I arrive, so apart from checking everything is working, I don’t worry about that. There are five or six cameras at most courses. First there’s one that shows a head on view down the straight. That’s mostly on screen for betting shows and results so that you don’t have things moving in the background. We have one on the finish, and a couple of high level cameras following most of the action.

Lastly there’s what we call the scout, which is the one mounted on a truck that runs round the inside of the course. That’s particularly important for those parts of the track which you can’t see from the stands.

Here in the commentary box I’ve a set up that allows me to switch between cameras and I’ve a producer giving me information, more so when I’m doing television than just racecourse.