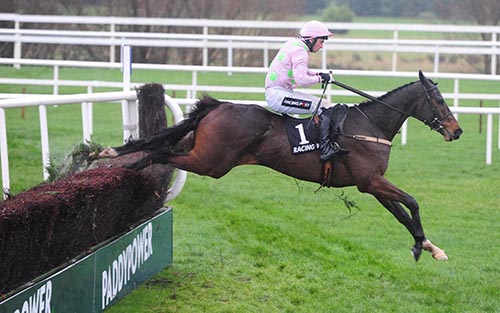 Arkle Preview: Douvan to beat all?

The second race on the opening day of the Cheltenham Festival, the Arkle is a novice chase run over a helter-skelter two miles. It is usually a fiercely run event with speed, class and no little stamina required to see out victory. The roll of honour is of the highest class and the Arkle has been, perhaps unsurprisingly, the best pointer to future Champion Chase winners.

In this post, we’ll review the trends, form of the leading contenders, and I’ll offer a suggested bet – heck, let’s call it a tip – in the race.

A race for class horses, with all four runners returned at 5/4 or shorter since 2003 obliging. Douvan looks set to be a shorter price than any of them – Simonsig was 8/15 in 2013 – and will probably make it five out of five for the shorties.

Five-year-olds had a good record in the race between 1998 and 2006, winning four times. Their 0 from 10 record since masks the fact that a trio were placed and only two have even run since 2009. Pain Au Chocolat may represent them this time.

[Side note: 5yo’s used to get a weight for age allowance, but that was scrapped in 2008. This coincides with the subsequent paucity of runners from that age group]

Six-year-olds can also claim four wins since 1997, including two in the last four years. That, however, is little more than they’d have been expected to achieve on numerical grounds, and there’s little in the age data save that the youngest have over-performed overall.

Arkle Age Trends: Nothing much ado

As with most races at the Festival, a rest of between two weeks and three months is the norm, and brings in a majority of the runners. One point of possible note is the record of those absent between two and three months: this group has won five times since 1997 and added a further six places.

In context, that is 28% of the winners, and 21% of the places, from 13% of the runners. Garde La Victoire and Sizing John fit this profile at exciting prices.

All 18 winners since 1997 had won over at least a furlong further than this two mile trip. The ability to stay on such a demanding track is pivotal. Those not to meet this criterion are 0 from 51 since ’97, and have just 7 places to their name. That is, from almost a quarter of all Arkle runners, no winners emerged and just 13% of the places.

On the face of it, this race is all about one horse: Douvan. His trainer, Willie Mullins, has suggested he’s the best he’s ever trained, and that from a man who has won 159 Grade 1’s in Britain and Ireland since 2003!

If the animal is anywhere near as good as his hype, then he’s very good. Happily, we don’t need to rely on the sound bite because the form book records its own compelling evidence of Douvan’s superstar status.

Beaten just once – on debut – in a nine race career to date, he already has four Grade 1 successes on his palmares. That quartet comprises the Supreme Novices’ Hurdle at last year’s Festival, the equivalent at Punchestown six weeks later, and back to back novice chases in Ireland on his most recent starts.

Douvan was the best of these over hurdles and he is the best of these over fences. His front-running style could be seen as a potential issue but, bluntly, I very much doubt anything will be able to live with him on the speed for long; and any horse that does try to match early strides is likely to seriously compromise its own chance in so doing.

Douvan is ‘bar a fall’ material. Put another way, he wins or doesn’t finish the race. I think, and hope, he wins.

If you like exactas, what might follow Douvan home? If you’d rather take a flier on the early markets – exactas being ‘day of race’ bets – then how about a little ‘without’ action? I’ll write about ‘without’ betting another day, but suffice it to say it is a tremendous source of value in markets that otherwise looked drained of such punting nourishment.

You do need a view on a horse at the top of the betting. Actually, you need two. By definition if one is looking at this market one feels the jolly is solid but unexciting punting-wise. That perception of solidity will often also betray a feeling of weakness about the chance of another near the top of the list. (Alternatively, you may simply believe the book is spot on and that there’s no edge at all. In my experience, this does happen, but it is rare).

So, Douvan wins bar a fall. But what finishes second (or third or fourth – you can bet each way in the without markets too)?

The clear Arkle second favourite is Vaniteux, Nicky Henderson’s seven-year-old. Wins at Kempton and Doncaster either side of a second to Ar Mad read well enough… but not strikingly. In Grade 1 company over hurdles, Vaniteux was third in Vautour’s Supreme, last in Faugheen’s Champion Hurdle, and second last in Jezki’s Aintree Hurdle.

In other words, he wasn’t good enough to be a top class hurdler, with a rating in the mid-150’s. Importantly, he looked exposed over hurdles, perhaps even a touch regressive; and the switch to fencing has come later than for many who rise to the top of the chasing tree.

The Kempton novice chase he won fell into his lap somewhat with two credible rivals falling, and he was then beaten when returning to the same track three weeks later. The gap between himself and Arzal truncated to just three lengths at Donny in a Grade 2, and that form shouldn’t be good enough to get second in an Arkle. It shouldn’t be good enough to legitimize quotes of 5/1, and 7/4 in the ‘without Douvan’ market either.

If I’m wrong on that, fair enough, but he looks a very beatable favourite in that latter book and, given it is 4/1 bar, there may be some fun to be had.

Put another way, only one horse besides Douvan has beaten Sizing John in his last eight starts. That was Shaneshill in last year’s Supreme – the likes of L’Ami Serge behind – and Shaneshill looks to be headed for the JLT.

Sizing John hated the ground last time, according to his trainer, and will be better suited by quicker turf. His approach looks likely to be to sit close to Douvan and try to make a move mid-race to take that one on. Of course, if Douvan has already gone clear, he’ll be bidding to pick up pieces and, as you’ll have guessed, I like his place chance.

L’Ami Serge retains an entry here, and in the JLT, with the Arkle looking more probable. As short as 6/1 a fortnight ago, his odds doubled after a lacklustre defeat by the sadly subsequently ill-fated Violet Dancer in the Kingmaker Chase at Warwick. He was readily outpointed there, but earlier facile trumpings of Doctor Harper (probably not off that day) and Run Ructions Run (rated 135) hinted at a bold showing in the Cheltenham showpiece.

A Grade 1 winner over hurdles, if you can forgive the apathetic Warwick effort, he’s a fair price. But he’s not a generous price and, after such a poor turn, this eye is cast elsewhere in search of a wager.

Garde La Victoire is a very likable horse, and talented too. There is a strong rumour that the JLT is his Fez destination, so on that basis he’s passed over here.

One that could be quite interesting is Gordon Elliott’s The Game Changer. He holds other entries, too, but has the benefit of experience over all of his rivals. Shrewdly campaigned, he was invited to lose his maiden tag over fences in May of last year and has since racked up six chase wins in eight starts (running second the other twice).

He may not have had to improve much from the start of that sequence to the end, and the fact that he’s not raced in a bigger field than seven, and in an average field size of 4.375, attests to the cheap nature of some of those plundered pots.

Each run in that chasing octet was on good ground or faster. This lad loves it rattling but if there’s one day when it probably won’t be that – due to either the weather or the watering policy – it is Arkle Tuesday. For that reason, as they say on Dragon’s Den, I’m out.

The joy of a very short favourite is that we are now in the realms of the 33/1 shots. In fact there is but one such horse, Outlander, and he is said to be JLT-bound. 40/1 bar brings in Tell Us More, who would have won a couple of weeks ago but for unshipping at the second last. Prior to that he’d won an ordinary beginners’ chase and had run third to Zabana at Leopardstown over Christmas.

He was a promising novice hurdler last season – sixth in the Supreme, when a touch outpaced – but the ground might be too fast for him again at Cheltenham.

Anything between soft and good should be fine for Harry Whittington’s progressive fellow, and there was plenty to like about the way he conceded four pounds and stuck on when Hendo’s Arkle second favourite went by him at Doncaster in a Grade 2 last time (Fox Norton and Shaneshill well beaten). Available at 33/1 (20/1 NRNB) in the ‘without’ market, which would reward each way support down to fourth place assuming Douvan is in the top three, that’s not the worst option in the race by any manner of means.

Douvan looks very likely to win the 2016 running of the Arkle Challenge Trophy, and at prohibitive odds to boot. But, even if you don’t have a big wad of elevens to risk in search of ‘easy’ fours, there are bets to be struck.

Sizing John is one, and he might be worth playing at 4/1 with Boylesports (if you can get on) or at 7/2 non-runner no bet with bet365.

Elsewhere, Arzal is the sort I’m happy to have a couple of optimistic pounds on. If Arzal runs here, he may get involved in a battle for the lead and that might be a problem. More sensibly, though, his jockey might track the pace and attempt to pick up the pieces, a ploy which would surely thrill his syndicate owners. Rated just three pounds behind Vaniteux, he’s worth a speculative each way at 33/1 in the ‘without’ market.

All of our in-depth previews, trends and tips can be found here: