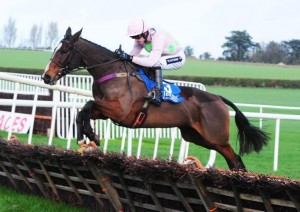 One of the newer races at the Cheltenham Festival, the Mares’ Hurdle has already provided more than its fair share of thrills and spills. From the six-time winning Quevega to last season’s final flight drama of Annie Power crashing out, to be usurped as the winner by stable mate Glens Melody, this has been Willie Mullins’ race for the last seven seasons.

And, this year, even if Annie Power is re-routed to the Champion Hurdle as expected, Mullins has a super-sub in the shape of Vroum Vroum Mag, unbeaten in eight in Britain and Ireland.

With the same mare winning six of the eight renewals, there is little point in looking at trends, so instead we’ll plough straight into the form book.

If Annie Power does indeed sidestep the race she, erm, foxtrotted last year, then this season’s Mares’ Hurdle will look a sub-standard affair, even for a heat still searching for a depth to match its star turns thus far.

Vroum Vroum Mag, hereafter VVM, has assumed the mantle of favourite in the wake of her yard mate’s presumed absence. While that looks reasonable based on form, her price of just shy of even money at time of writing requires some substantiation.

As I wrote in my introduction, VVM has won all eight UK and Irish races so far, a sequence that takes in six chases and just two hurdle events. In her defence, the hurdles were on her most recent outings and demonstrated her versatility: the penultimate run was two miles on heavy ground; the final prep was over three miles on soft ground.

While some crabbed the manner of her victory there – by three and a half lengths from the exposed 138-rated Jennies Jewel – there are some points worth noting.

First, she was racing over three miles for the first time and it may be that her stamina was tested beyond its limits. Second, although the runner up was rated 138, there were six mares in the field rated 140+, and it seems unlikely that they all under-performed.

Thirdly, she seems to be as effective over hurdles as she is over fences, with her Irish rating in the latter discipline a loftier 155. And fourth, she has yet to be seriously tested at the business end of a race, so who knows how much more there is in the tank?

So far so good for the Mullins’ Tuesday acca backers – they’ll be in a dandy place if still live by the time she lines up – but what of the negatives?

All of VVM’s runs since signing for Team Wullie have been on soft or heavy ground meaning she’ll need to prove she’s as competent on presumed quicker turf. Moreover, she is yet to race in Grade 1 company. And further, she is being asked to tackle a task for which she may not have been prepared until a few days ago.

Despite all of that, she’s already rated about the best of these and has obvious residual upside; the two and a half mile trip might just be perfect; and it is possible that she will improve for a sounder surface (she won a bumper in France on good to firm; progeny of Voix Du Nord appear to do at least as well on good ground).

On balance, 11/10 is a fair reflection of her chance, and perhaps even offers a modicum of value. At the very least it gives those previously mentioned Wullie Acca Backers a fighting chance if all has gone to plan to this point.

Of course, all of the above – and indeed the below – is predicated on Annie Power going a different path. If she turns up here, she wins.

Last year’s winner, Glens Melody, is now retired but the 2015 form is expected to be defended by Polly Peachum, who was beaten just a head that day. Nicky Henderson’s eight year old mare loves the intermediate trip, can perform on all types of turf, and has Pattern form of 12 at Cheltenham.

She comes here in good fettle after another head verdict went her way on heavy at Sandown early in the year and she’s been freshened up nicely for this. If anything Polly should be marked up for getting the job done in the quag as her trainer affirms that she prefers faster conditions. The official handicapper has suggested she’s five pounds below her best now but I’d expect her to run to close to her peak mark of 155 on better ground over two and a half miles at Cheltenham. If she does, she’ll be very hard to keep out of the frame.

Harry Fry’s talented mare, Bitofapuzzle, takes high rank in the betting, at around 14/1. I am happy to overlook her chance for three key reasons: 1. she returns to hurdles after an abortive chasing season, 2. she had a hard race (ultimate pulled up) at Wetherby last time, and 3. she might just want further and/or softer.

She was a close up third in this last term, but that was off a solid preparation, something even the most optimistic Fry fan wouldn’t suggest has been the case this time around. Those Fry fans may yet have something to cheer, however, as we’ll come to.

Aurore d’Estruval represents trainer Rebecca Curtis, having switched from John Quinn before this season. Since then she’s run fourth to Camping Ground in the Relkeel Hurdle and ninth to VVM in that one’s Grade 2 win last time.

That form is not good enough to get competitive here, so her shortness in the market commands closer scrutiny. Prior to her year off, she was a progressive mare and actually ran second in the Grade 1 Fighting Fifth Hurdle. That was over two miles, a distance at which the pick of her form has been recorded.

She will appreciate the drop back from three miles and she will perhaps enjoy the sounder sod, but she has plenty to do to justify her current odds in my opinion.

Of more interest is The Govaness, recently moved from Fergal O’Brien to Richard Newland. Now seven and in her third racing season, she has always been a mare of promise, as she demonstrated by winning twice in bumpers, the second one in a Listed affair at Cheltenham.

That was a 15 runner heat where she beat a mare called Lily Waugh, more of whom shortly. Since being asked to leave the ground, The Govaness has run consistently well at a Listed level, winning twice and running second to Polly Peachum. However, she has just found things tougher when upped in grade and that could be her undoing in this top class race despite admirable course form.

We are already into the realms of the 20/1 shots, and the recent money for Paul Nicholls’ Tara Point suggests she’s winning her battle for fitness. With just four runs on the board, the last one in December 2014, she has a lot to prove in that regard and also in the regard of heart for a battle such as this.

Her last official rating was 135, roughly twenty pounds shy of what’s needed here, so even factoring in significant improvement it is hard to see her winning, regardless of the trainer sound bite that “if she gets there, she’ll run well”.

One that makes a dollop of appeal – appeal granted a hearing by quotes of 25/1 – is Desert Queen. Harry Fry’s eight year old was a very late developer, not seeing the track until exactly a year ago. She won there, easily, making all over two and a half miles on good to soft, and that seems to be the key with her.

On ground with the word “good” in it, she is 1112, whereas on soft – the balance of her runs – she is PP7. With every chance of getting her ground, she might lead the mares a merry dance, her modus operandi being to go from the front.

She already has an official rating of 147, all of the steps to which she’s achieved on top of the ground. And she wouldn’t need to bound forward too far in optimal conditions to make the podium so, at the price, she’s playable for small potatoes.

It would be remiss not to mention the gorgeous mare, Lily Waugh, trained by Anthony Honeyball, whose stable is sponsored by geegeez.co.uk. Lily was a very promising bumper mare, finishing – as I’ve mentioned – second to The Govaness at Cheltenham.

She seemed to lose her way a little after that, but this season won three before running up to a very smart novice called Smart Talk in a Grade 2 at Doncaster. That one is now rated 149 and Lily is 140 which, in truth, is unlikely to be good enough to win even a weak renewal of the Mares’ Hurdle.

She has other entries, in the handicaps, but if running here I’ll be cheering whilst clutching a small loyalty voucher before Lily heads off to the paddocks and her new career.

This is a race with a strong favourite who looks to have a very solid chance. If you were backing something short earlier in the day, I wouldn’t put you off including Vroum Vroum Mag in a double (or even, gulp, treble – perhaps with Min and Douvan, just for fun). But I’m not going to tip her here.

She’s certainly the most likely winner but you probably didn’t need to read the 1750 words in this preview to know that. No, the value of the preview is to find any potential lurkers; so, while Polly Peachum has strong place claims and will return more than is invested if snatching bronze or better, I’m going to roll the dice further down the lists.

Specifically, I’ll chance a half point each way on Harry Fry’s Desert Queen. She’s less exposed than most of these and more highly rated too. Her worst runs have all been on soft ground – including an eased-down-when-beaten ride last time – so if, as expected, it is terra firmer for the opening day of the fixture, she won’t need to improve too much from what she’s achieved already to figure. And she’s 25/1…

All of our in-depth previews, trends and tips can be found here: