It took me three minutes and average luck. So why am I telling you this?

Not to gloat, obviously. But rather because it was a combination of a couple of my favourite themes –  a pool bet rollover and good old Geegeez Gold – both of which are accessible to you as much as they are to me.

I’ve talked about looking out for value in tote pools, and where to find it, many times over the years. This post is worth reading if you’re new to that concept, and especially to the Irish Tote, which is where yesterday’s winning wager was struck.

One of the great value opportunities referenced in that post is the “rollover”. A rollover is when a pool bet is not won, with the total wagered on the not won day ‘rolled over’ to a subsequent day’s racing. At Fairyhouse’s Easter fixture, the Pick 6 (equivalent to the UK jackpot) had partially rolled over from the Irish Grand National card, leading to a carry forward – that is, a starting amount of ‘free money’ (to those not invested in the previous days) – of over €57,000.

I noticed this late, very late. Indeed, having noticed it at 3.17pm with the first race off time at 3.20pm, I was destined to inglorious – and deserved – failure. Still, I had €38 in my Tote Ireland account, so I loaded up race one in Geegeez Gold and got cracking. Pronto! Here’s how I quickly arrived at my €32 ‘caveman’ perm. 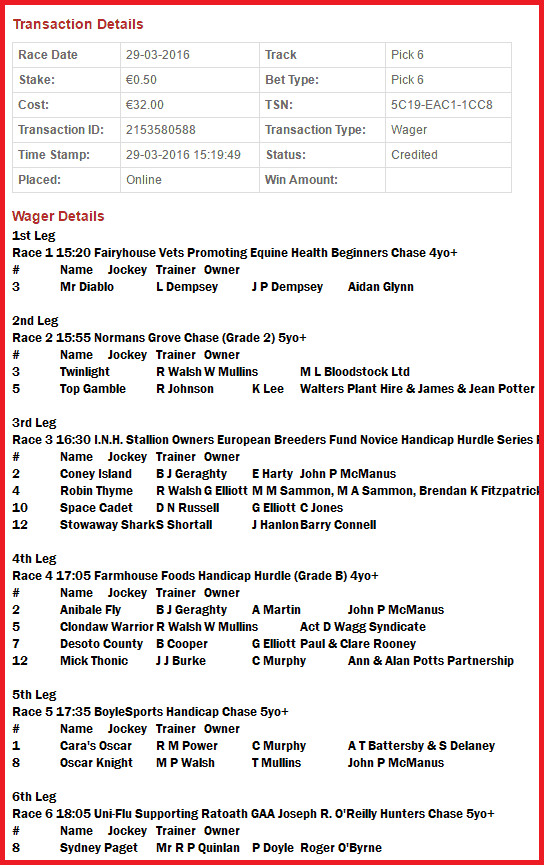 Race 1 – A four runner beginners’ chase with an odds on jolly, Mr Diablo: I banked on the odds on jolly, figuring that if that got beaten I could get on with some work. It won. At 2/5.

Race 2 – A Grade 2 chase with two progressive young fencers up against some established – and largely over the top – pro’s. Top Gamble was favoured and with good reason: he was the top rated and looked to have more in the locker. I included him, as well as Twinlight, a capable beast on his day, though his days haven’t been for a while.

The favourite won, at 5/4. Twinlight pulled up.

Race 3 – Tricky. A novices’ handicap hurdle where no fewer than ten of the fifteen starters were making their handicap debuts. I went four deep here, including the four best backed horses at the top of the market prior to the first race (i.e. I took a stab based on the Gold Odds tab at 3.18pm) 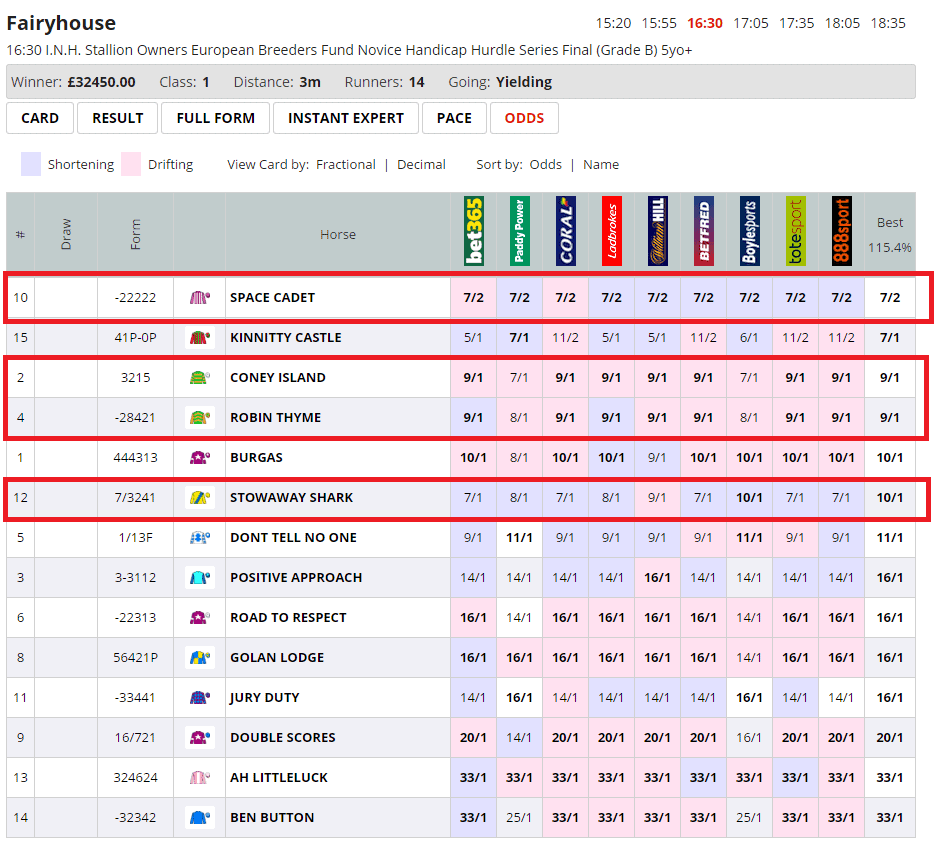 This image was taken later in the day, after the money for Coney Island and Robin Thyme had dried up. But the early cash was well placed, as 9/1 Coney Island saw off 7/1 Stowaway Shark.

Race 4 – Another handicap hurdle, though much less competitive looking this time. I went four deep again, taking the top two in the betting, the one from The Shortlist, and a lively longer priced horse.

Clondaw Warrior, The Shortlist horse, did the bizzo easily at 9/2.

Just 300-odd tickets left now, and I was starting to get excited. Except that in the last two legs, I had two picks and then a banker in the last. Still, if I could get through leg five, I’d be able to manage my position.

Race 5 – Eleven runners in a competitive looking handicap chase. A short-priced favourite, Oscar Knight, was the first name on the team sheet. And I took a second stab as backup on Cara’s Oscar, based on his two from two winning effort at Fairyhouse. 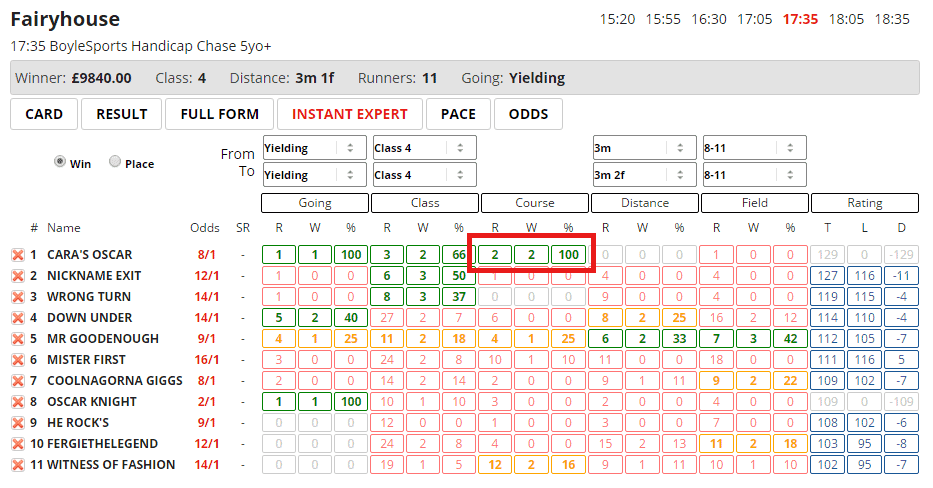 The fates smiled on me, with the market leader making a mess of the second last, and the waited with Cara’s Oscar, closing quickly down the outside and having the deepest reserves after the last to prevail at 8/1. Whoop. Exit strategy time.

Race 6 – In the three minutes prior to the off for yesterday’s Pick 6, I had scraped together a small interest perm in which I was able to use one of my preferred multi-race bet ploys: the final leg insurance hedge. This essentially involves banking on the favourite when that horse is 6/4 or shorter, with a view to either laying it (if it’s odds on) or betting all rivals to lock in a profit.

Sydney Paget was favoured before leg one as he was at the off for leg six, his race. His starting price was 6/5. 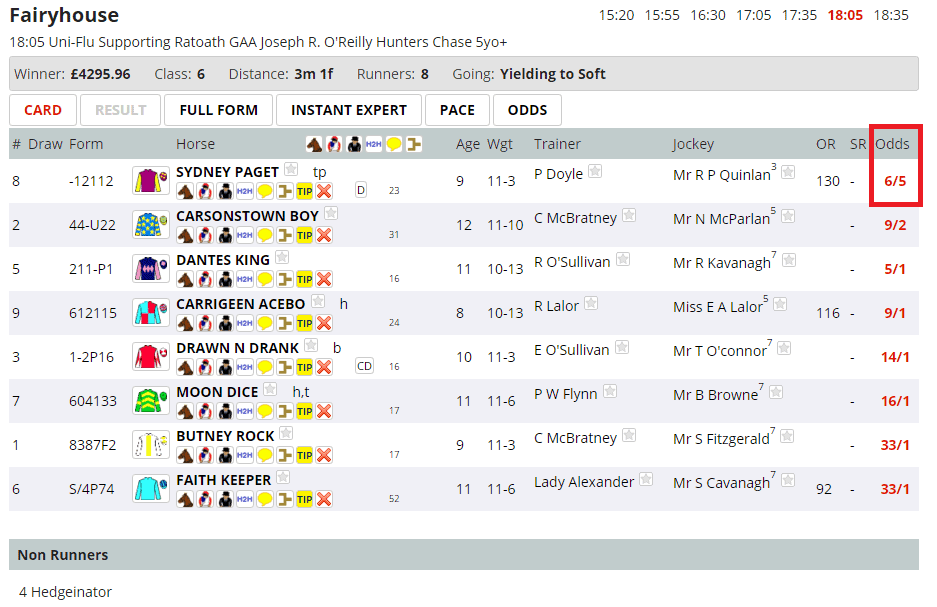 A look at the remaining units showed that Sydney Paget, horse number 8, had 14.5 units on him; and the unnamed favourite carried another 0.5 units. In other words, there were 15 units on Sydney.

I backed the remaining horses in the race to win a diminishing amount the further away from the top of the market they were. 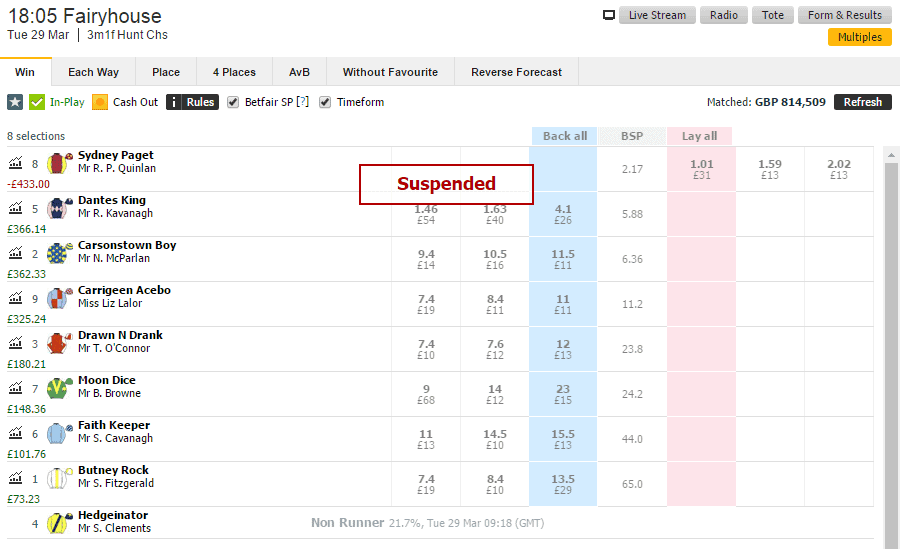 As you can see, if Sydney won, I’d concede £433 of my £2,000-odd return from the Pick 6. But if any other horse won, I’d pick up some cash despite the Pick 6 ending up a losing bet. Butney Rock, the least likely outcome according to the market, would yield the least profit, a mere £48 after the Pick 6 ticket was accounted for.

The race was a cracker, with Sydney harried all the way round. He jumped markedly to his left most of the time on this right-handed track, and was clearly headed by Dantes King between the last two fences. Indeed, at that point he looked booked for third, and I was consoling myself with the £330 profit Dantes King would harvest, as well as being smart enough to insure the position.

But Sydney Paget is made of stern stuff. And his jockey, Roger Quinlan, was – in the parlance – much the best. He galvanized SP, who obligingly rallied to get it done by an unlikely-in-running two and a quarter lengths.

The dividend came back as predicted and, after accounting for my £433 insurance play in the last, I cleared a profit of £1,587.84. From three minutes research using Geegeez Gold.

Of course there was luck involved – when isn’t there in a multi-race wager? But the combination of market strength, as typified on the odds tab; course form, as demonstrated on the Instant Expert; and one horse very well suited to conditions, as shown on The Shortlist; enabled me to make this play. In less than three minutes!

Note the time the bet was placed, eleven seconds before the official off time. 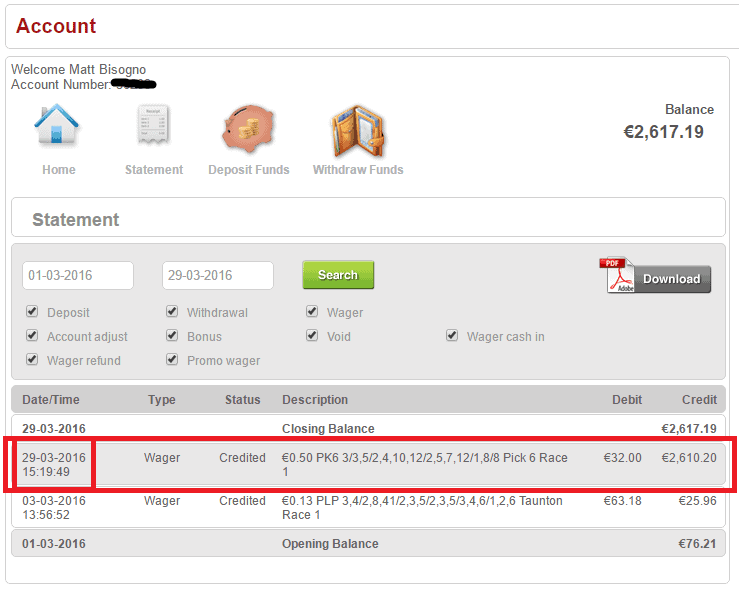 Without Geegeez Gold, there is no way I’d have been able to make that bet – certainly not in the available time. That’s the thing with Gold. It is a great way to cut to the chase. Sometimes a nuance will be missed in the summary reports but, equally, sometimes a horse like 8/1 Cara’s Oscar will shout its credentials where other form students would overlook him.

Learning how to use the tools inside Gold takes time, though a number are deeply intuitive and easy to access and consume, notably The Shortlist report and Instant Expert, key components in this three minute study/bet scenario.

Over the course of the next few months, I will be adding a series of ‘how to’ strategies to the ‘My Geegeez’ members’ area. Their objective will be to showcase elements of the Gold content and strategies or situations when they might be used. I’m aiming to have the first online by mid-April.

These will accompany further additions to the tool kit including a Sire Snippets report and a draw/pace combo tab, both of which I hope will be available by the end of April.

I’m as committed to developing an industry-leading provision of racecards, form tools, reports and computer form book as ever. After a few personnel issues last year which slowed progress, we’re now back on track for some exciting new features in 2016.

If you’re already a Gold subscriber, thank you, and I hope you’re enjoying the ride. If you don’t yet subscribe to Gold, I hope you’ll try it out soon. Here’s a link if you need it.

I hope you found this story interesting/motivating, and I look forward to hearing more of YOUR success stories with Gold very soon.