Awful run from Acajou. No idea what to make of it except that perhaps the ground was too fast and/or the trip too far and/or (most likely) the horse is not very talented.

Saturday is my last pick for this stint – Chris returns refreshed for next week – and, with your permission, I’d like to take a bit of a chance, in the…

The Grade 1 Celebration Chase, and a race packed with conspiracy theories and unreliable propositions! Amidst all of that are not one but two ‘line of green’ horses from The Shortlist. One of them, Sprinter Sacre, is 11/10; the other, Sire De Grugy, is 14/1.

Sire De Grugy has won five Grade 1 chases, the most recent of which was over course and distance as recently as last December, when he beat Champion Chase third, Special Tiara, after a bumping match at the last. His record at Sandown is superb: 231111. In chases at Sandown it is 1111. 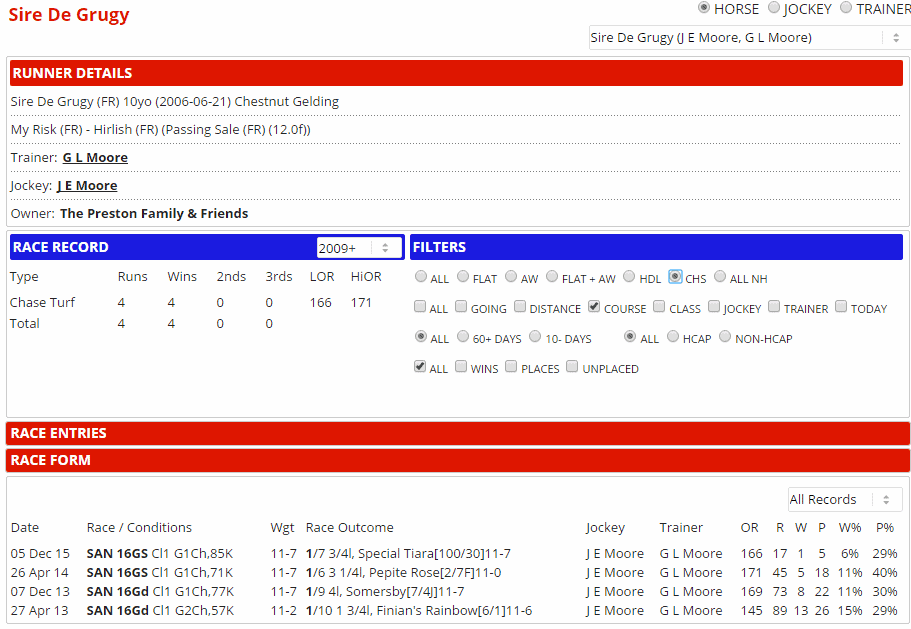 As you can hopefully see, three of his four Sandown chase wins were in Grade 1 races, and the other was in this race prior to its elevation to Grade 1 status, back in 2013. He also won this race in 2014, its first year as a top tier event, but did not defend last year.

At ten, SdG is not getting any younger, but then nor is the 11/10 favourite, who is the same age.

And let’s quickly think about this race. It’s a grudge match: with north of £71k to the winner, this heat could decide whether Paul Nicholls retains his trainers’ championship, or whether the all-conquering Willie Mullins steals it across the Irish Sea.

Mullins runs one, Un De Sceaux; Nicholls three (Dodging Bullets, Solar Impulse, Ulck Du Lin). There is every likelihood that Ulck is in the race as a spoiler for Un De Sceaux, and that he will take UDS on for the lead. And I would question whether Solar Impulse can bridge the stone-and-a-half ratings gap after some excellent handicap efforts (including winning the Grand Annual at Cheltenham’s Festival).

Dodging Bullets is a very precarious proposition, too. Last season’s Champion Chase winner has looked full of holes in two heavy defeats this season, and he’d need a comeback as Lazarine as, well, Sprinter Sacre’s!

As for Sprinter, I just can’t believe he has another huge dance in him after that incredible effort in the Champion Chase last month, and there are rumours from the Henderson stable that not all the main men wanted him coming here. Rumours are what they are, but there is little doubt that negative cases can be made for all runners, including Sprinter Sacre (and Sire De Grugy).

In the circumstances – it being Sandown, and April – Sire De Grugy is worth a chance, each way two places, at 14/1 BOG. He could bomb out, but then so could every other runner in the race, including the 11/10 and 6/4 top two in the market. Good luck, and over to Chris from Monday. Thanks for having me. 😀

To see what the latest best prices are…

REMINDER: THERE IS NO STAT OF THE DAY ON SUNDAYS