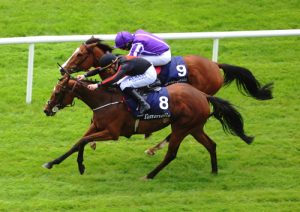 The New Breed: Irish Flat Trainers on the Up

It wasn’t quite Leicester winning the Premier League in terms of fans wanting to see someone other than their own come home in front, writes Tony Keenan. But Awtaad’s 2,000 Guineas win for Kevin Prendergast was one of those rare racing moments when punters were happy to see their bet beaten: the veteran trainer is about as likeable and well-respected a person as there is in the Irish flat game.

But Irish Guineas weekend wasn’t just a story of an older handler regaining past glories; it was also a tale of three less experienced trainers coming to the fore. They are:

Prior to Sunday, Adrian Keatley was best known for winning moderate races at Ayr – exploiting my long held belief that a bad Irish flat horse is [slightly, but materially] better than a bad English one – and was gaining a reputation for placing his runners well in races they could win. Indeed, his record at Ayr is impressive, winning 12 times from 31 runners before Monday for a strike rate of 38.7% and a level stakes profit of nearly 47 points, admirable figures considering he has only 27 career wins to his name.

In this approach, he is mirroring Gordon Elliott over jumps who targets his lesser horses at lower grade UK races; indeed, Keatley is on record as saying that he modelled his methods on Elliott. But the pair have more in common than that as the best context for Jet Setting’s win in the 1,000 Guineas on Sunday is Silver Birch’s Grand National win of 2007. Not only did both horses begin their careers in other yards, but both were sent out by trainers wildly inexperienced in campaigning runners at that sort of level.

And while Keatley’s case is not quite as marked as Elliott’s (he famously hadn’t even trained a winner in Ireland before Silver Birch), he had zero practice in training a Group 1 horse before Jet Setting. In his career, he had saddled only a single runner at Group level and four at Listed class while his best horses – Athas An Bhean, Anonymous Lady and Manny Owens – were rated no higher than 89.

Jet Setting was a triumph on every level: for the bloodstock agents who bought her so cheaply; for the connections who gambled not once but twice in supplementing her into a Group class; and, obviously, for the trainer who had her ready to beat Minding, already a three-time Group 1 winner and regarded as the best filly of her generation.

Group 1 races at a mile are ultra-competitive and they tend not to be won by anything other than major trainers, whereas big sprints like the Nunthorpe and Abbaye have presented the opportunity for smaller owners to get in on the act but not the events over further.

Nor is Keatley happy to rest on his laurels with Jet Setting as he already has a couple of North American races in mind for her. As yet, his backers tend to be a mix of minor owners and syndicates so it will be interesting to see if he can generate more support as a result of this. His immediate concern may however be G Force, who runs in the same colours as Jet Setting for the Equine Growth Partners Syndicate. Improving a horse out of the Hannon yard is one thing, David O’Meara quite another!

It was perhaps lost in the buzz surrounding Prendergast and Keatley but Michael O’Callaghan had a pretty good Guineas weekend, too, sending out the third place finisher in both classics, albeit at a respectful distance to the winners. The important thing about Blue De Vega and Now Or Never is the colours they run in, those of Qatar Racing, and the young trainer has done very well to get such a major ownership concern into the yard at this early stage,  especially as they have juveniles in training at Crotanstown as well as the horses they bought into after showing early promise.

O’Callaghan is a modern trainer, skilled in the media game, savvy on social media and polished with the press. He’s not afraid to engage in PR exercises either and while the use of Kieren Fallon as stable jockey is clearly more than just a stunt, it has generated a lot of column inches for the yard, some of it probably disproportionate given the size of the string

Over the past days, the former champion has been the subject of a number of major profiles in the national media with O’Callaghan getting plenty of coverage in the process. Having Fallon on the ground at a stable has to be a plus but the chances are this ends in tears if the past is anything to judge it on; but by then everyone will know Michael O’Callaghan’s name.

One area where O’Callaghan seems to have slightly altered his methods in 2016 is in bringing his runners along more slowly than in previous seasons. Both Blue De Vega and Now Or Never improved for their first outing of the year and that’s been a case across the string; judging by Racing Post Ratings, the average improvement from first to second run this term was 8.7 pounds. He’s training them for the long game and that makes sense; the last thing a trainer wants to be is another Paul Deegan, winning everything on Lincoln day and the three weeks afterwards when people are still focussing on the jumps and hardly being heard of for the rest of the year.

While only training since 2012, O’Callaghan has already built a decent brand. However, there is a suspicion that his reputation outstrips his production at this point. That said, there is more to running a training business than simply having winners; Gigginstown might use performance-related criteria when divvying up their horses but not every owner does and O’Callaghan has done really well in getting some big names through the door.

He doesn’t have the hype surrounding him as the others, perhaps because he’s been around for longer, but Willie McCreery is a trainer of substance and he landed a double on Guineas Saturday that included a Group 2 win for Devonshire. He started training in 2008 and since then his number of winners has risen steadily, breaking the twenty win barrier in each of the past three seasons. 2016 looks like it could be a career best campaign as he not only has 11 winners already on the board but he is also operating at a strike rate of 19%, markedly higher than a previous best of 12%.

Devonshire is a filly and McCreery has done particularly well with fillies, Fiesolana the chief feather in his cap over the 2013 and 2014 seasons. Indeed, her campaigning was a thing of beauty, beginning on an Irish mark of 93, winning six times for the yard, culminating in a Matron Stakes victory. Billy Lee was on board Fiesolana for much of her Irish career and if McCreery is the most progressive flat trainer around, then Lee is the most improved rider. He garners very little attention with an accent almost as bad as my own (!!) but he has developed into an excellent jockey and one that can be trusted on the big day.

As I covered in my Grading the Flat Trainers piece last autumn, McCreery had more premier handicap winners than anyone else in Ireland last year (four) and it wasn’t as if he lucked into a single well-handicapped horse that went on a sequence. Rather he won those races with four different horses (three of them fillies, perhaps not coincidentally) and he went close to landing another on Sunday with Champagne Or Water. These races are a proper test of a trainer as they are seriously competitive with an average of 14 runners last year.

Some of the bigger owners have started to come on board with McCreery. Sheikh Mohammed had his first runner with the stable in 2013 before using the Godolphin moniker the following year and the returns have been good, the trainer/owner combo with a strike rate of 19%. And it’s not as if McCreery has been getting their absolute bluebloods: Raconteur, at 200,000 guineas, is the most expensive Godolphin horses he’s trained which, by their standards, is not an extravagant purchase. That may change now, especially in light of Devonshire’s win at the weekend, a win which should be viewed as a success for the trainer as much as for the filly. She was readied for a race when the clear form pick, Lucida, wasn’t ready and took full advantage. That’s the sort of training and placing you want on your side.