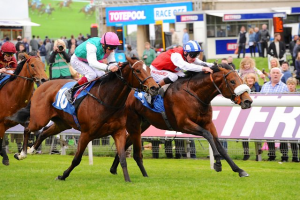 A simple but Profitable system for Ascot?

It’s Derby week and I’m sure you expect me to delve into the two mile and a half Classics taking advantage of my many years’ experience. With that in mind I had a nice day on Epsom Downs last week, at Breakfast with the Stars, where there were a number of stars, equine and human, and even more Breakfast of which your correspondent and for one that I can vouch for, Mick (Michael) Channon junior, partook with great alacrity.

It was later that morning when I started to project my thoughts a little further forward, having spent a pleasant half an hour in the company of Alan Spence, who has been having a good time of it with his horses this season.

Thoughts turned into research; research into statistics and stats into a sure-fire profitable system. How appropriate that the next horse to test the seemingly unbreakable thrust of my argument, is Profitable, owned by A D Spence!

Amazing. The system is one I bet cannot be replicated anywhere else in the history of English racing, at least not with such spectacular returns. It involves a Group 3 race run in either late April or early May, and a Group 1, around six weeks later. My research also encompasses an interim race, this time Group 2, with all three races being over the minimum distance.

So step forward, Newmarket’s Palace House Stakes on 2,000 Guineas day, the Temple Stakes (optional) at Haydock three weeks later and the King’s Stand three and a half weeks after Haydock.

The Newmarket race has been going for more than half a century and I fondly remember the first winner, Galivanter, a Major Lionel Holliday home-bred trained by Major Dick Hern, who won in 1961. Plenty of army stuff there!

The Temple has an even longer history, but having been a feature of the old Sandown Whitsun meeting and run either on Bank Holiday Monday or the following evening, it switched to Haydock for the first time in 2008. Such are the differences in the two tracks, I have confined my studies to the Haydock period <lazy sod, Ed>.

Ascot in 2016 is also a fair bit different from its pre-2006 model, as the straight course has been re-aligned so that at the finish it is 42 metres further north (nearer the High Street) than previously. Inevitably the character of the track has been at least marginally altered.

So that’s fine, you say, where is this profitable system?

Ok, there have been eight King’s Stand Stakes run on the modified course since 2008, the period of the study. I took note of all the Palace House Stakes winners in the period and noticed that only four of them took the quick return to Haydock, none winning. Six of them went on to run at Ascot and four of them won.

Of the four that ran in all three races in the same year, Equiano, now a stallion at Newsells Park Stud in Hertfordshire, performed easily the best. Trained in 2010 by Barry Hills, he was second, beaten by dual winner and still active Kingsgate Native at Haydock. Equiano had also won the 2008 King’s Stand when trained in Spain on his first appearance in England.

In 2009 the Henry Candy-trained Amour Propre, a gelding, won at Newmarket, missed the trip to Haydock before finishing unplaced behind Australian sprinter Scenic Blast at Ascot. In 2011 Tangerine Trees, like Kingsgate Native still active on the racecourse, was easily beaten both at Haydock and in the King’s Stand (last of 19 to Prohibit).

Mayson, the 2012 Palace House scorer, got off the mark with his first stakes winner, Global Applause, in the National Stakes at Sandown last Thursday. He missed both Haydock and Ascot, but then took the July Cup (6f) before finishing runner-up in the Prix de l’Abbaye on his final appearance.

Otherwise, all the Palace House winners followed up at Ascot. Equiano’s second success, much more anticipated than his unconsidered first came at 9-2. The remarkable Sole Power, another durable gelding, took a close fourth at Haydock before his first Ascot win at 8-1.

Sole Power made it a double double – missing the trip to Haydock this time – at 5-1; and, last year, Goldream, having won the Newmarket race for sprint specialist Robert Cowell, bombed at Haydock, but came bouncing back at Ascot at 20-1!

So in other words we have six contenders for a Royal Ascot bet, with only two losers. The other four collected 37.5 points profit, making it 35.5 points overall, or almost 600% to level stakes.

So, what do we do about this year, you could ask? Well for the first time, the two key races have provided the same winner, the eponymous Profitable – by name and by nature. The last Temple Stakes winner to succeed in the King’s Stand was Cassandra Go in 2002, when of course it was run at Sandown. Sole Power has won all three races, but has had a fair few goes at it, and never in the same year.

Profitable, now four, and by Mayson’s sire Invincible Spirit, has apparently caught the eyes of several would-be suitors following his latest win in the Group 2 Temple. There he had to contend with softer ground than ideal, and the attentions of the talented Mecca’s Angel, who had beaten the flying Acapulco on soft in the 2015 Nunthorpe on her previous start.

The insistent attempts by sections of the media to suggest the Haydock result should have been reversed after the pair came close through the last furlong would have been less unfair had their proponents first contemplated the potential downside for the winner’s connections.

Profitable is one of the few top sprinters in independent (non-Arab or Coolmore) hands, and as a colt also a highly-attractive and rare stallion prospect, being by a noted sire of sires. Whether his value would have been adversely affected by a demotion – I’m sure it would have; who cares if a goal is incorrectly ruled out, it’s not a goal?– the result on the ground was almost certainly unaffected by their coming close together.

So with all that in mind, how can Profitable, rated by Timeform as recording the best Time Figure of the season, better than any of the Guineas winners, still be available at 8-1? Clive Cox is in flying form, too. Fill your boots. Wonder what price ADS has on his voucher?

My appearance at Epsom was principally to run the eye over Harry Champion, who went along to keep company with Hugo Palmer’s Oaks contender, Architecture. He did a nice job and acted well enough on the track, although his rider reported the ground was too soft. If Architecture wins on Friday, stay around for Harry in the last off just 8st 3lb.