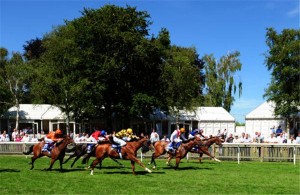 They race on the Newmarket July course

With the sun finally shining outside, the prospect of Newmarket’s July meeting all of a sudden is a much more attractive one than previously anticipated in this dreadful summer. True, the old Tuesday to Thursday tradition is long gone, so we start with the sales on Wednesday, then mix sales and racing for the next two days before Saturday, when the July and Bunbury Cups dominate the afternoon action.

Er, well they would, if it wasn’t for the fact that between 2.45 and 5.10 there are eight other races on Channel Four, if that’s where you watch the action. If I were at home, I’d be staying with Racing UK, not only home to Newmarket, but also the other afternoon fixtures at Ascot, Chester (no C4 there) and York.

So while Matt Chapman and co are twiddling their thumbs bringing you some mixed fare from Tipperary, the RUK heavyweights have 28 races, worth a combined £1.58 million, to fit in an overall three-and-a-half-hour slot. Then there’s Salisbury and Hamilton in the evening on the 432 channel also.

If I were at home I’d be hard pressed to find comfort and tea-making breaks, but I’ll be at Ascot watching Dutch Law win the finale at 5.35 for in-form Hughie Morrison. That is unless Alan Spence organises a helicopter to pick me up at Newmarket straight after Profitable goes a stage further on his great road to fame and fortune in the July Cup an hour or so earlier. If they can afford to supplement him, they should go the extra mile, surely.

I’m sure I’ve mentioned it before, but Newmarket July is one of the few remaining meetings when old friends from earlier pre-social media days come out to play rather than watch their sport in their living (or should we say drawing?) rooms.

Retired trainers, once prominent owners and local worthies from the era of owner-breeders and 50-horse strings, still show the same love for their sport, if not some of the modern developments.

One thing this Saturday does provide is decent prize money. In all there are 14 races with £25k or more on offer, up to the £500,000 for the July Cup and £200,000 for the Bunbury and John Smith’s at York. I’ve never had a connection with a July Cup champion – apart from Mayson’s running in my old colours – but the 1988 Bunbury Cup winner, Pinctada, was bought by me from Charlie O’Brien and was the beneficiary of some deft handicapping at Wilf Storey’s Co Durham emporium.

The next summer Pinctada won six races within 20 days (Friday to the third Thursday after) for Rod Simpson, yet never carried more than a single penalty.

Those were the days of Racing Calendar publication of weights for a couple of weeks ahead, so it was remarkable that when, the following year, he’d won twice more before Newmarket, Pinctada was still low enough in the weights for lightweight Gary Bardwell (as well as owner Terry Ramsden’s money) to be on and 6-1 favouritism to be landed.

My memory of 18 years ago is one of mixed emotions as I’d fallen out with Terry by then and watched the horse I’d found win a race I’d always loved. Another, long gone now, was the two-year-old seller which Suggest won two years before for Wilf on his second start after being bought privately from Fathi Kalla, owner of the smart Corrupt, who won the Voltigeur after finishing sixth in Generous’ Derby.

We paid a few quid to buy him back in a race from which the previous year I bought Linda Stubbs’ nice winner Buzzby. Prince Yazid Saud, who’d been a prominent owner a few years earlier with such as Persian Heights, the St James’s Palace Stakes winner, had the very plausible idea of buying British seller winners to take advantage of the perceived easier midsummer French juvenile opportunities. The same opportunity is equally true nowadays as Jo Hughes and Paul Blockley have been exploiting such races so well this season, following Stan Moore, Noel Quinlan and Giles Bravery’s recent example.

So when in 1996 Buzzby came with a strong run to win by a couple of lengths at Newmarket, he was relatively cheaply bought, possibly for around £7,000. Anyway within a month he’d won 10,671 Euro, first time out at Deauville for George Mikhalides, so for a while that idea turned out well.

It was, of course, no more than a consolation prize. The day before, having done my research on behalf of the same owner, I had stood with some trepidation, charged with the responsibility of buying a horse that my client thought could develop enough to win the coveted King’s Cup back in Saudi Arabia.

There was a very decent budget, but by the time that was exhausted – I think I bid £35k – Timmy Hyde had secured future triple Champion Hurdle winner Istabraq for 38,000gns. Years later I asked Timmy how much J P McManus would have paid. “We’d have gone to 100!” he said. More like cannon fodder than under-bidder!

Wednesday’s sale day could be fragmented if Harry Champion runs at Yarmouth, like Dutch Law on Saturday, in the last race of the afternoon. Yarmouth’s been lucky over the years and it provided a first win for Hitman a few weeks before his track record-breaking win in the valuable 10-furlong race, now worth £80,000.

He was a syndicate horse trained by Henry Cecil and running in the name of the Paper Boys. Giles signed the docket after we paid 11,000gns, but was resigned he would not be training him and when Henry came to view him in Hamilton Road, his fears were realised. Sorry mate.

He looked a class act that day but unfortunately Brought Scott exploded my anonymity – having activated my vanity – by interviewing me after the race on ITV. This encounter attracted the notice of a Hertfordshire copper, also a racing fan, who relayed the information back to the then Mrs Stafford at HQ, eliciting the remark “What horse?” when given the good news.

Saturday’s logjam will once again be diluting the effect of the John Smith’s Cup at York, another of those great races with as many happy as unhappy memories, way back to the days of David Jack, owned by Arsenal fan Jack Fisher and the cantering winner 50 years ago under the brilliant Peter Robinson.

But for the purists all is not lost. Newmarket have indicated that they will consider going back to midweek (sort of, Wednesday to Friday) next year leaving some breathing space for Ascot and York at the weekend and making it rather easier than will be the case this week for a decent jockey to be available for owners’ horses. If nothing else, someone can join me and Alan on the helicopter back after the July Cup to ride Ray Tooth’s horse. Dream on!