A good quality Class 3 handicap at Pontefract this evening run over a mile.

A quick look at the Speed Ratings shows that the majority of the field are quite closely grouped, however Gurkha Friend for Karen McLintock is a long way clear, rated 99 with the next closest having an 88 rating.

Richard Fahey runs Spring Offensive and he has an excellent record here at Pontefract. We can see from the graphic above (after clicking on the black trainer icon under the horse name) that over the past five years 20% of all of Fahey’s runners have won here and almost 37% of them have been placed. From over 200 runners that is a terrific performance, and even better is the win P/L of £37.48 for a level £1 stake. Just following all of Fahey’s runners here blindly over the past five years would have returned a tidy profit. 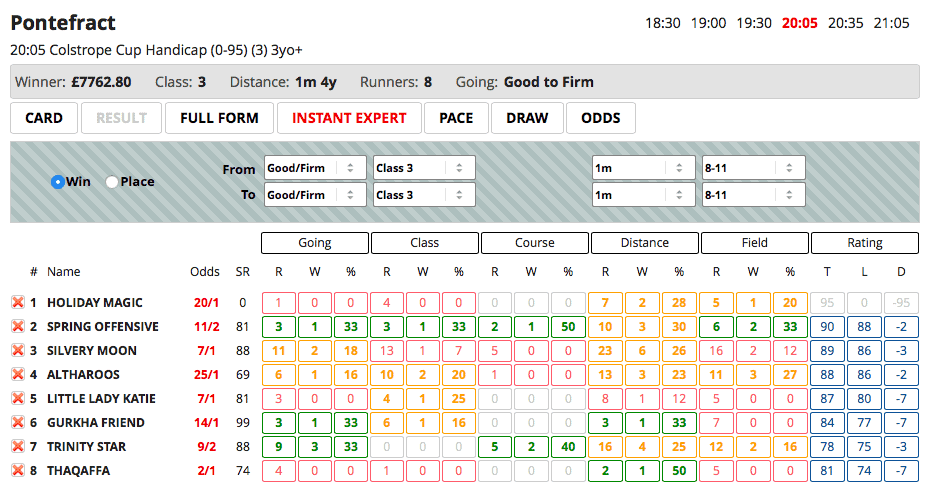 From looking at the Instant Expert tab, Spring Offensive shows up in a good light here. He has a nice line of green apart from the distance section, and even then he has a 30% win rate at this distance so it looks encouraging. This is also backed up with Spring offensive having the highest score of the day on The Shortlist (below). Trinity Star also has some good numbers having won three from nine on the going and two from five at the course.

I have always considered Pontefract a notoriously difficult course for horses to come from behind and the below Pace report backs that up. Front runners here, from a large sample, have a brilliant overall record with highly impressive win and place figures. Without delving further into the stats, perhaps a look at all of Fahey’s runners that like to race up with the pace, could prove an even more profitable angle in the future.

When having a look a the draw tab we can see a similar bias. Low drawn numbers in this field size have a far superior record and again is a profitable angle from over 100 runners.

Looking at the graphic that actually breaks it down by stall numbers it is particularly interesting to see that stall three has an incredible record. From 28 runs, horses drawn in stall three have won 11 times and placed 14, which seems outrageously high. I’m not sure I can really explain the rationale behind this, however it is certainly one to keep an eye on for the future, and Trinity Star fills that stall today.

In quite an open looking race, the Geegeez Gold tools highlight some really interesting statistics and from the above there is a definite pointer towards one or two of the runners that can give the three year old favourite a decent race.