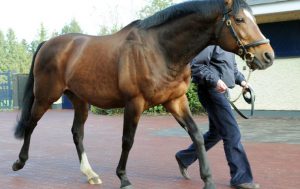 Galileo has fathered the next generation of stallions

They have all clocked up impressive top prize money figures during that time, Sir Michael’s 2003 tally of £3,754,850 from his best numerical score of 115 setting a high benchmark. That was improved upon by bin Suroor for Godolphin, the following year with £4,319,646 from the same number of winners.

British prizemoney is not regarded as in any way equivalent to the level of ability needed to win races compared with elsewhere, but the major events have steadily increased in value so that in 2015 John Gosden’s 133 wins from 577, including Golden Horn’s great achievements, propelled him to a record domestic seasonal tally of £5,277,651.

This year, Messrs Gosden (£1.8m) and Hannon (£1.57m) are some way off their record schedules, but with lavish money available – especially at Goodwood this week – there is still time for them to get back on track.

But it is most unlikely that either will get within shouting distance of the remarkable O’Brien, who sneaked within £3,000 of his 2013 figure when collecting the £652,165 for the Coolmore partners for Highland Reel’s front-running display in the King George at Ascot when he took full advantage of Postponed’s enforced absence, and a bonus £65,000 for Sir Isaac Newton’s fourth.

With a possible £560k in prospect for The Gurkha in Wednesday’s Sussex Stakes and an even more probable £340k for the flawless Minding in Saturday’s Nassau, it is not unrealistic to project that O’Brien might be pushing the £5m mark by the end of the week, and then there’s all those big juvenile prizes to target later on, not to mention Champions Day at Ascot in the autumn. The record must be his for the taking.

There’s an unbreakable thread through the past 50 years at Ballydoyle, begun by Vincent O’Brien, principally parlaying Robert Sangster’s Vernons Pools inheritance and then most tellingly O’Brien’s son-in-law John Magnier’s innovative input, through to Aidan (no relation) O’Brien for the past 20-odd years.

The human thread echoes the equine. The original Coolmore brains trust identified the wonderful Northern Dancer at the beginning of his stud career after his 14 successes from 18 on the racetrack which featured an ultra-tough juvenile campaign and the first two legs of the Triple Crown, unique for a Canadian-bred and –based racehorse.

O’Brien bought such as Nijinsky, The Minstrel, El Gran Senor and Storm Bird, all champion sons of Northern Dancer in the late 1960’s and early 1970’s while Sangster bought the mare Fairy Bridge and sent her to Northern Dancer, producing Sadler’s Wells.

While not quite the best of his generation, Sadler’s Wells did win the Irish 2,000 Guineas, Champion Stakes and Irish Champion Stakes, before going on to make a pretty good imitation of his sire by winning 14 championships (13 in a row), interrupted only for a single season by Danehill Dancer, also from the Northern Dancer male line through Danzig and Danehill.

Sadler’s Wells came along in 1981 when his father was 20. His own son Galileo was a little quicker to arrive, in 1998. Galileo was a most impressive winner of the Derby and since his holding court at Coolmore, he and fellow Sadler’s Wells product, Montjeu, have dominated the Derby with seven wins between them.

Like Sadler’s Wells before him, Galileo has become almost an automatic champion sire every year since appearing at stud and, apart from the Derby winners and brilliant juveniles, he has the distinction of having produced the highest-ever rated racehorse, the sublime Frankel, winner of all 14 of his starts.

Frankel was a product of the inspired Galileo – Danehill “nick”, Danehill’s daughter, Kind, providing the leavening of Galileo’s considerable basic talent. Interestingly, Highland Reel, never really considered a player by the racing establishment even after his King George, is also by Galileo out of a Danehill mare. After Saturday, perhaps surprisingly, he stands third in prizemoney terms for any of Galileo’s progeny with £2.42m with six wins in 15 starts, behind only Frankel £2.99m (14/14) and Cape Blanco, also O’Brien-trained with £2.57m from nine wins in 15 starts.

With Ashford Stud in Kentucky to focus their American business, Messrs Magnier, Tabor and Smith have invested strongly in War Front, with excellent results and now control American Pharaoh, last year’s US Triple Crown winner. Sadly, Scat Daddy, their at the time upwardly-mobile stallion, sustained an injury which caused his untimely death before the start of the 2016 breeding season.

It would be easy to under-estimate the ability of Highland Reel, who is shaping up as a possible successor as a global money-maker to Montjeu’s son St Nicholas Abbey, who drew stumps with a jot under £5m in career earnings.

Meanwhile the “other” Galileo –Danehill representative, Frankel, has already started his stud life with a string of promising first-season representatives. Saturday’s Princess Margaret winner, Fair Eva, who was untroubled yet still got within 0.08sec of Henrythenavigator’s juvenile track record is leading the way with early favourite quotes for 1,000 Guineas glory.

There were plenty of people willing to stump up the £125,000 which has been required for Frankel’s services in his first four years at Banstead Manor and the ante is sure to be upped for 2017. It would be entirely in character for the Coolmore brains trust to have targeted Frankel as a potential addition to their portfolio. Prince Khalid Abdullah allowed them into Danehill when he was already a top stallion, winning three UK titles and siring 349 stakes winners, a record. Why would the Prince not listen if Coolmore were to come calling? The last association did nobody any harm, after all.