We go to Perth for today’s Race of the Day and a two mile handicap hurdle with just the six runners on soft ground.

David Pipe trains Impulsive American who is just a four year old with really good recent form. His last two wins have been over fences and races off a lower mark back over hurdles.

Gordon Elliot (Hostile Fire) and Nicky Richards (Mardale) both have excellent course form with over half of their runners placing in the past year. In fact over the past five years Elliot has a win record of almost 30% and nearly 56% of all his runners have placed. This is incredibly strong form and definitely worth taking note of.

The Instant Expert tab in quite interesting as it shows that the second favourite, Hostile Fire, isn’t really suited by today’s conditions at all. He has a predominantly red line which doesn’t inspire confidence.

Impulsive American shows up quite well here but it should be noted that he is 12 pounds higher than his last win. As a four year old it is reasonable to expect him to be on an upward curve so this may not be insurmountable.

Although not from a large sample of runs, Mardale looks suited by this race and has previously won from his current mark.

From the pace tab it looks as though Lord Wishes is going to lead and it will be interesting to see how much of a lead he is able to gain without exerting too much energy. If the others sit in behind and let him have an easy lead he has the potential to run away with it. 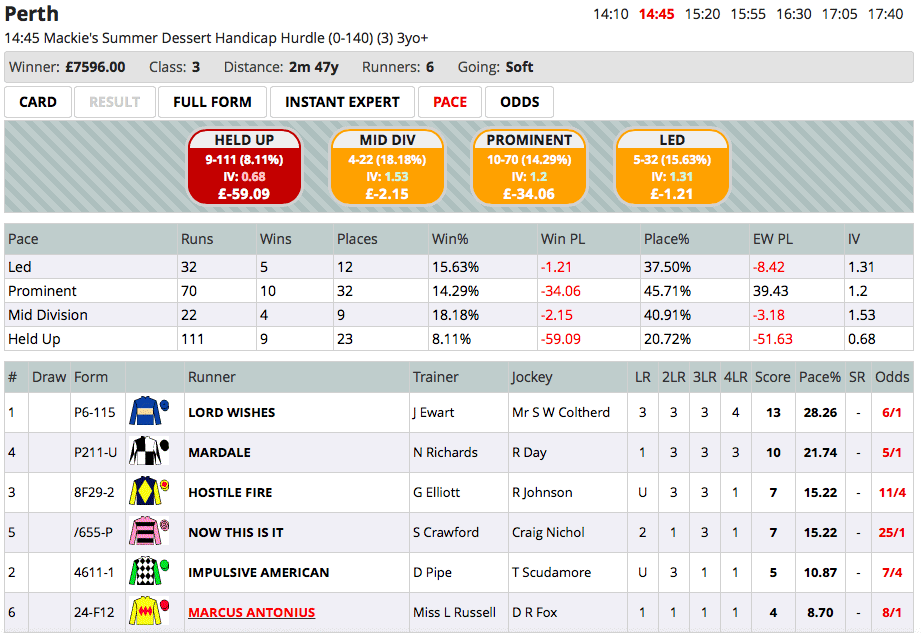 All in all quite an open looking race where a case can be made for five out of the six runners. Personally there appear to be too many unknowns and nothing really jumps out as value so this is a race I will be leaving alone.

Stat of the Day, 27th July 2016 No money in backing favourites…
Scroll to top