This is a five furlong sprint at Pontefract on good to firm ground with 13 runners, meaning this will be a mad dash for the line.

The three year old Hilary J has had just the four runs to date but she is a long way clear on the Speed Ratings with a mark of 87. The next best is 74, meaning that is quite a gap. She was placed in her first three runs before making all to win last time out, however when looking at the full form filter we can see that one of those runs was over a mile, with the other three being six furlongs, meaning this will be the first time she has been tried at this distance.

If we click on the ‘Breeding/Sales Data’ icon it shows us that she is in fact related to a few five furlong winners, therefore it is definitely feasible she will be effective over this trip. 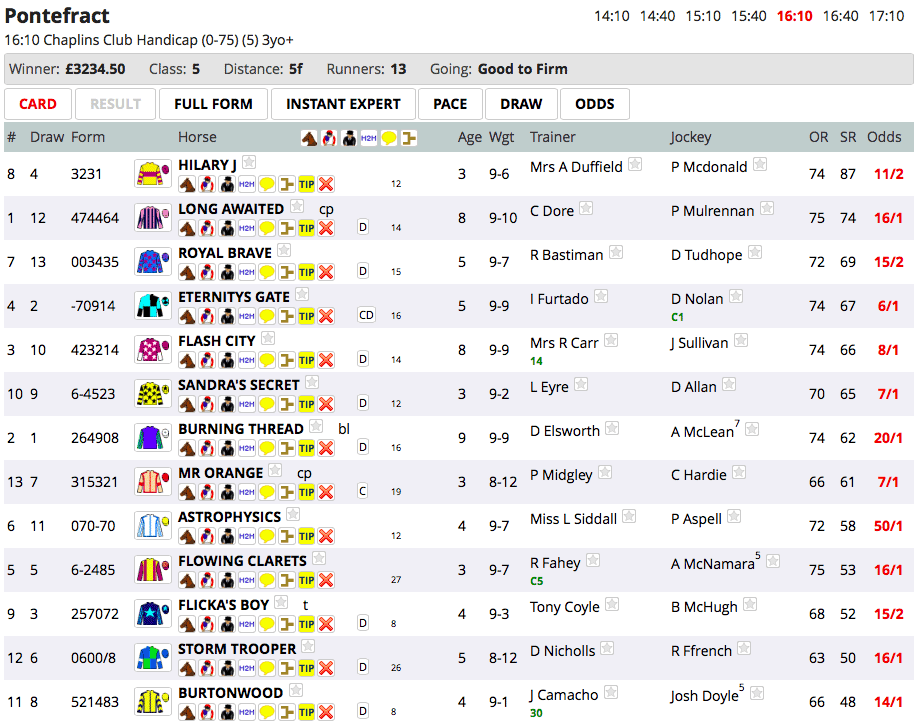 When looking at the Instant Expert tab on the place setting there are a few horses that have parts of green, signifying some good form in some of today’s conditions. It is Mr Orange that really stands out though with a full line of green, with two or more runs in four of the categories. He is five pounds higher than that of his last win, however he is just a three year old so further improvement is very likely. 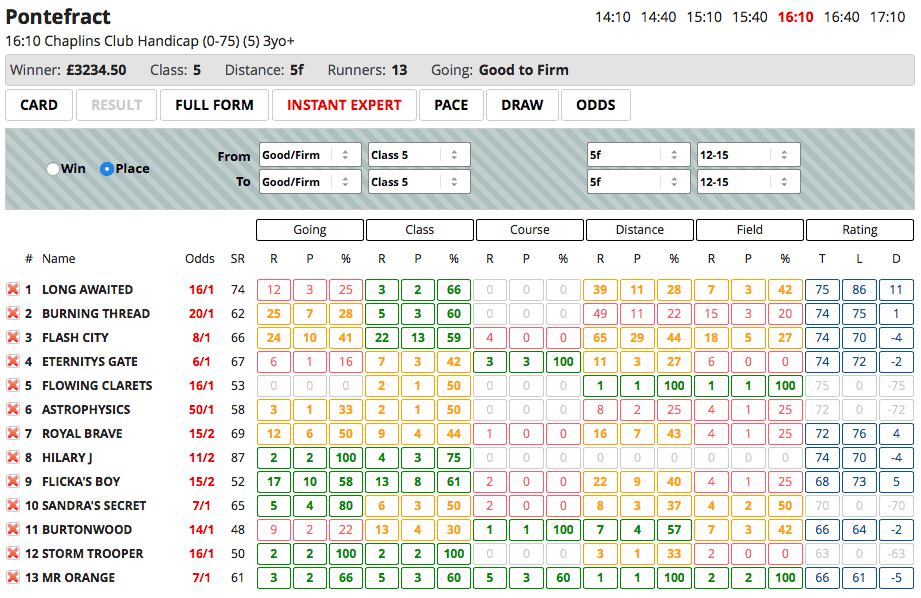 It is good to be able to get a reading on the pace of any race, over five furlongs it is absolutely vital. The Pace tabs shows that over 31% of horses that have lead at Pontefract over this distance have gone on to win, that is an incredible record.

Eternity’s Gate has led in both of his previous two races with Mr Orange, Flicka’s Boy and Sandra’s Secret being very handy in at least three of their last four races. We have already seen from the Instant Expert tab that Mr Orange has excellent place claims, adding in his early speed and his price of 7/1 starts to look a little appealing. 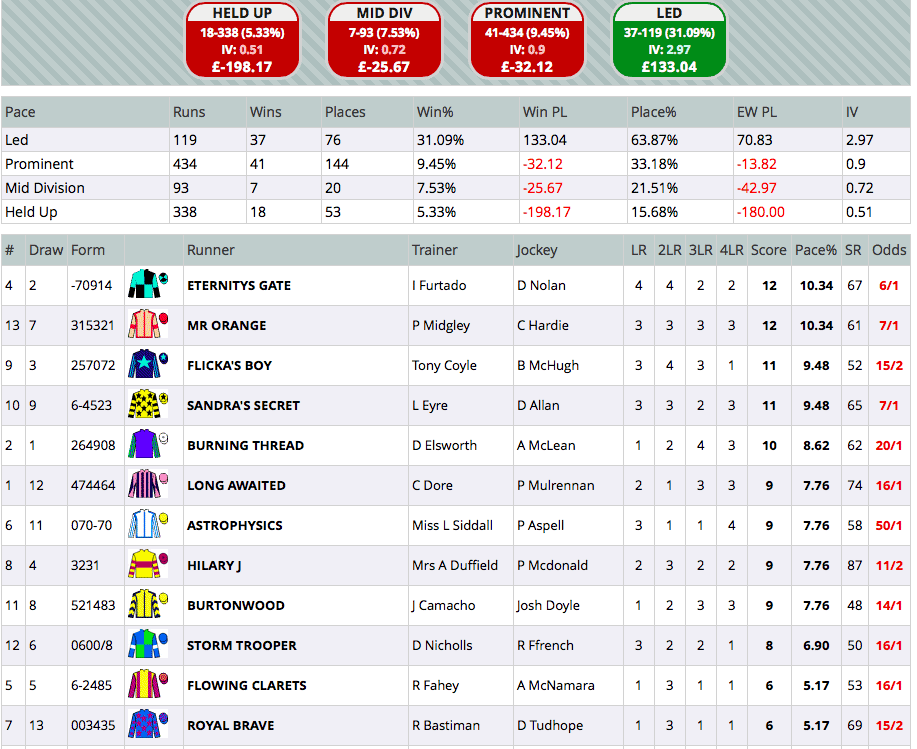 The draw doesn’t appear to have as a pronounced effect as the pace of the race, it is still worth noting that low drawn numbers have easily the best figures, albeit over a fairly small sample size.

We have seen that Eternity’s gate likes to be quick out of the stalls, and he is drawn in stall two, therefore connecting things nicely. 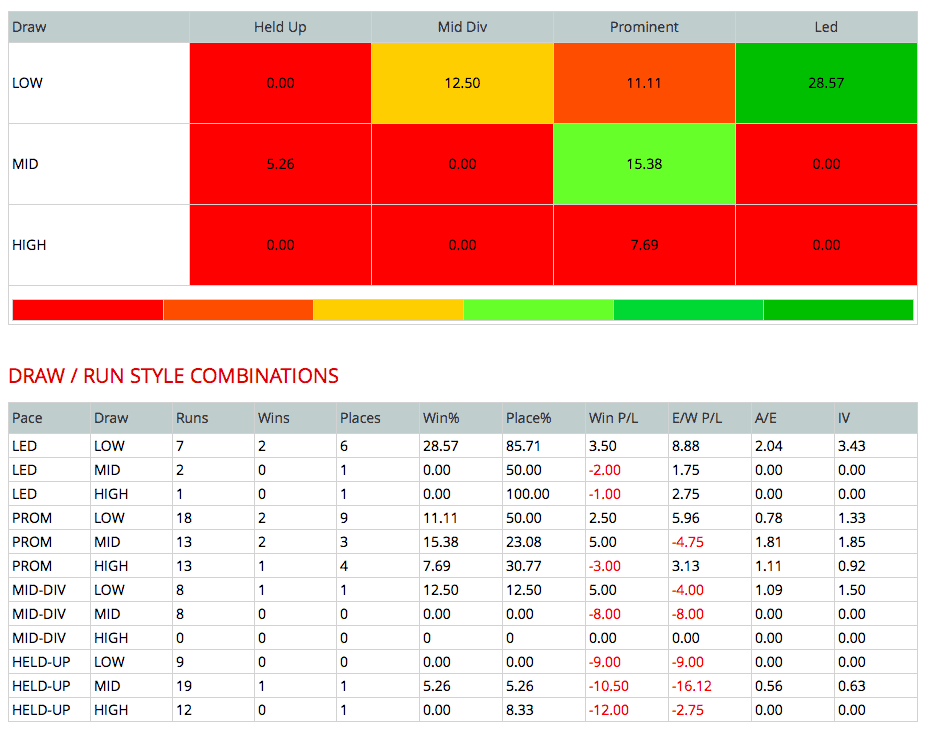 Stat of the Day, 3rd August 2016 Just what the doctor ordered…
Scroll to top