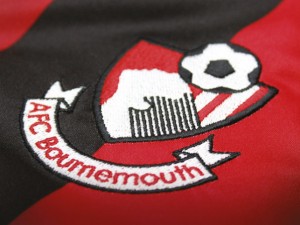 For many, it’s already started. For the rest – those with a predilection for the Premier League – it begins this weekend. The football season is about to burst into life and if, like me, you’re a fan, then it’s a very welcome return for the kick and rush (and shimmy and dive) brigade.

In this post, I’ll share the bets I’ve made (for whatever that’s worth!), mention a ‘just for fun’ Fantasy Footy league, tell you about “Geegeez Gold for football”, and highlight a few of the best silly season betting offers that accompany the curtain-raising weekend for EPL 2016/17.

My Footy Bets This Season

Let’s kick off – now a single pass back from the centre circle, as opposed to a ‘to you to me’ effort – with the bets I’ve placed for this season. And it’s fair to say that they have made an inauspicious start…

Although both Boro and Oxford were promoted, Sunderland were saved by the now England manager after Dick Advocaat, presumably named after the custard-coloured component of 80’s favourite cocktail, the snowball, had been so lamentably poor that he was replaced at almost the first turn. Leyton were good on their day, but pants too often.

Still, a small profit was garnered on the wager, though not enough to stave off losses in other markets. Markets such as the Premier League dual forecast, which must have been a total ‘skinner’ for the bookies, with Leicester-Arsenal the sort of addled fantasy normally the exlusive preserve of hardcore psychadelic drug users (with apologies to any hardcore psychadelic drug users who only bet sober, and would never entertain such a preposterous notion!)

I’m again taking on Sunderland. They were pretty poor last season. Actually, they were largely awful. This time, David Moyes has come in for big Sam, with a reputation to repair. He’s not the worst option, not by a long chalk, but his squad is moderate. Much of the dead wood has been cleared out – seven exits this summer – and in their place have come two Manchester United second/third stringers in Paddy McNair and Donald Love (who?) as well as one of the more unpronounceable new faces, Papy Djilobodji.

I have to front up and say I have no idea about Papy except that he was involved in a relegation dogfight in Germany last season. And he’s a defender. Rumours suggest Kone is on his way out of the Stadium of Light, and I think this is very much the squad of light, too.

Of course, Hull look pretty near doomed, meaning there may only be two spots to battle for, but there are reasons to believe that both Boro and Burnley can survive the trapdoor. Watford and West Brom look moderate, too, but both set up well organisationally.

In the Championship, I’ve plumped for the deeply unimaginative option of Newcastle to be promoted. Yes, they lost their first game. But I was actually heartened by the way they played there, in the first half especially. They do look a little shaky defensively – first day nerves? – but in midfield and up front they have both ability and desire. Ignoring Shelvey, of whom I’m not a fan, the likes of Matt Ritchie – who will be a huge player for Toon – and Dwight Gayle come in with Prem pedigrees, and the core of the relegated side remains. With such as Mo Diame and Alex Mitrovic to add to the mix, they should be a powerhouse this term.

League Two is always trappier, and I’ve combined muggy with ambitious. At least that’s how it looks after game week one when my longer-priced promotion punt, Plymouth, were whacked 3-0 at home by Luton, and then beaten 2-0 away at Reading in the Cup. At least they can now concentrate on the league…

Portsmouth, perennial under-achievers at this level, have been made favourites again, and scraped a home draw with Carlisle last weekend before losing to Coventry after extra time in their midweek Cup fixture. Onwards and downwards, lads.

So, not hugely hopeful in League Two, but both sides still have decent chances of a top seven finish, despite beginning on the back foot. Anyway, the wager looks like this: 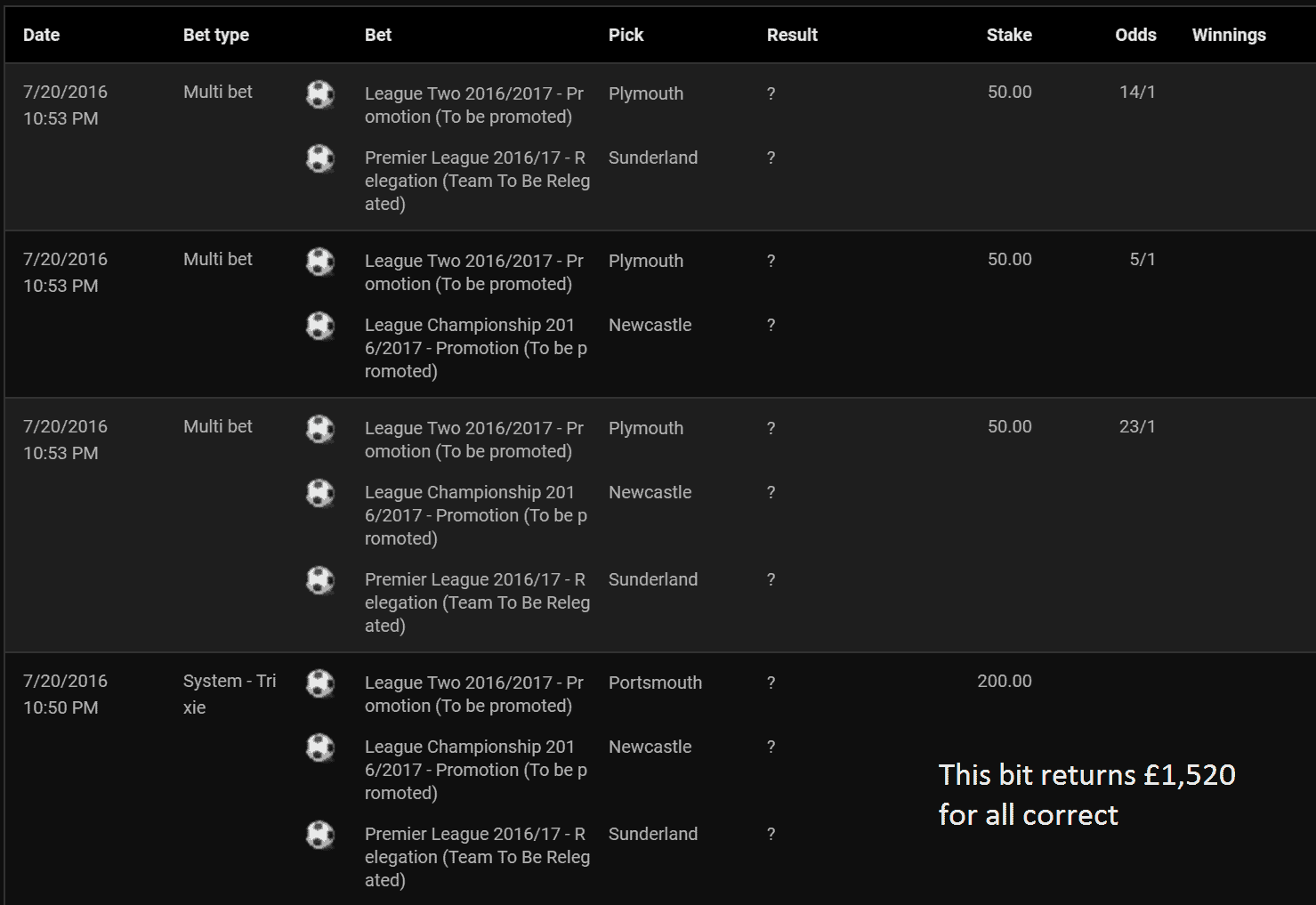 Not a great start, but it’s a long old season…

Elsewhere, and I’ve gone with the obvious in combining Hull to finish bottom and Newcastle to finish top in their respective divisions, at a combined 10.2/1. Both ought to be in serious contention for those outcomes, so it will be a fun watch with a possible ‘out’ towards the end of the season. 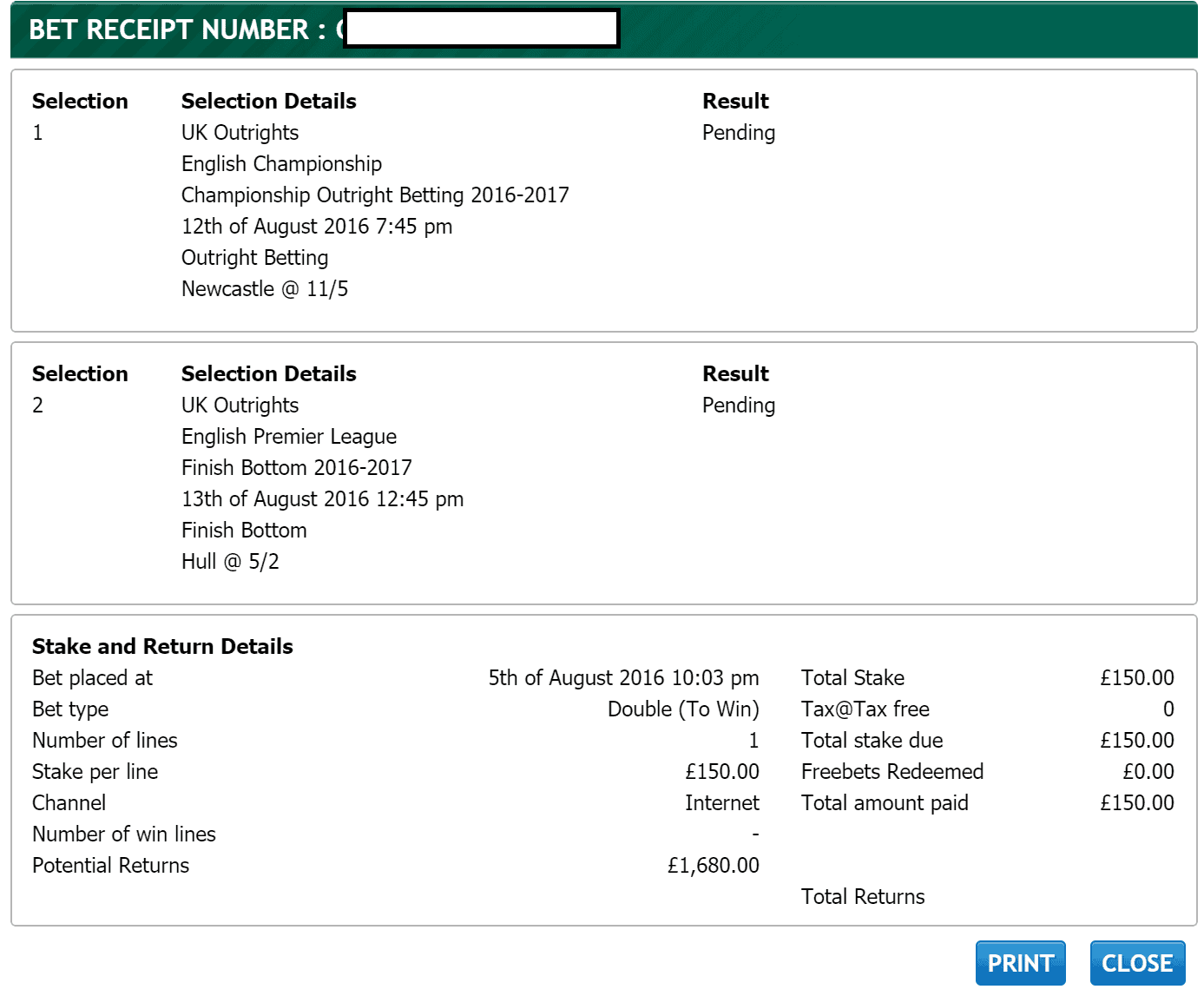 This one should offer plenty of interest for the season

I’ve yet to make a top goalscorer bet for the Prem, and will be looking to combine the top price with the best place odds and, ideally, a decent ‘xyz when your man scores’ concession. More on that below.

Now then, the last few years, we’ve had a Fantasy League competition where the winner has bagged himself a free Lifetime subscription to Geegeez Gold. I’ve run out of time to do that this year, but if you want to play in this season’s Geegeez Super League – just for fun – then here’s the web address and the code you need.

Here’s how to join in

That should be you registered as part of the league. If we have more than 100 entries – last year there were around 300, and it looks like 200-odd are auto-eligible – then I’ll rustle up a top prize which I’ll notify players about next week.

Geegeez Gold, but for Football…

If you receive emails about betting, then, like me, you’ll have received a bundle about various footy products and services this week. That makes sense, given it’s the start of the Premier League and all. And if you’re interested in tips then the message I sent at the start of the week is probably for you.

However, if you’re into panning for your own gold, a la Geegeez, erm, Gold, there is really only one service I can give the full five star recommendation to.

Goal Profits is really quite like Geegeez Gold for football. Against each fixture across myriad leagues around the world, countless markets are analysed and rating values assigned to each team in each market.

Those ratings are compared against the prevailing Betfair odds and percentage ‘values’ are assigned. Like Gold, green is good and red is not so good, making it easy to find bets that might be the wrong price.

It’s the only football data service I use for my match betting, and I’m not even using Team Stats (this part of Goal Profits) correctly!!!

Many subscribers use it for trading, and there are a good number of those who are now trading full-time as a result of the excellent and personal attention provided inside the forum area.

Steve Brown, who runs the site along with Kevin Laverick, are both very well known to me. In fact, Kevin was my first review manager about eight years ago (!) and Steve… well, I went to school with Steve in Bournemouth in 1982 – and we’ve been great mates ever since, even travelling around Europe together as wide-eyed teenagers!

So I can vouch for this pair like almost no other on the interwebs, and I can tell you their service is absolutely excellent if you loves you some easily digestible and puntable data. It really is like Geegeez Gold for football. And given that Gold is becoming some of a life’s work for me, that is the highest compliment I can give it.

There’s a special offer if you sign up this weekend, but forget that – this is either for you or it’s not. If you bet in a considered fashion on football, it’s for you, and you should take a look here:

p.s. that’s an affiliate link. If you like Steve’s stuff and subscribe to it, I’ll get a kickback. Something like £15, which I’ll probably spend on more work on Geegeez Gold. Or a bit of a racehorse. Or perhaps even a cup of tea and a sandwich. Anyway, just wanted to be upfront about that.

p.p.s. you should still absolutely check out Goal Profits. So here is a ‘naked’ link where I won’t get beer, racehorses or shiny new bobbins on Gold:

Goal Profits is still great, but no hooves or tea for me 🙁

Seriously, check it out. It’s the business.

As if this time of year wasn’t awesome enough for footy fans, those of us who like a bet can avail of some of the more idiotic loss-leading offers floating around. Now, as always with such things, caveat emptor. I strongly encourage you to check out the terms and conditions.

There, you will likely find something relating to free bet tokens (i.e. not real cash), the need to enter a code (i.e. don’t forget), and/or the fact the offer may be for new customers only. Despite all that – and despite my feeling that such terms should be simpler and clearer – there are some decent offers knocking around.

These are my two favourites, and both are for existing customers as well as new ones:

To win the Premier League

Bet £20 on the outright market with Coral and they’ll give you a £2 free bet each time your team scores during the month of August. Click here for this offer, and its terms.

Bet £25 on the top scorer market and get a £5 free bet every time your man scores up until Christmas. For Bournemouth for example (up the Cherries!), that’s 17 games. And I’m backing Callum Wilson 🙂 Click here for this offer, and its terms.

That’s about the size of it for this post. Lots to get your teeth into if you’re a footy fan, and I hope the above has been interesting and perhaps useful.