This is quite a decent looking handicap on the all-weather at Kempton tonight, where the course is riding on the slow side. It’s run over 11 furlongs and has quite an open feel to it.

The Godolphin runner, Power Game, is at the top of the official ratings and also quite a long way clear on the Speed Ratings. It is interesting to note the huge disparity between runners on the Speed Ratings, when officially only ten pounds separates the whole field.

James Fanshawe is in super form at the moment with half of his horses getting a place over the past 30 days. He also has excellent form at this course, managing an great win record of over 20% for the last five years, which translates to a win P/L of 40.37 to level stakes. 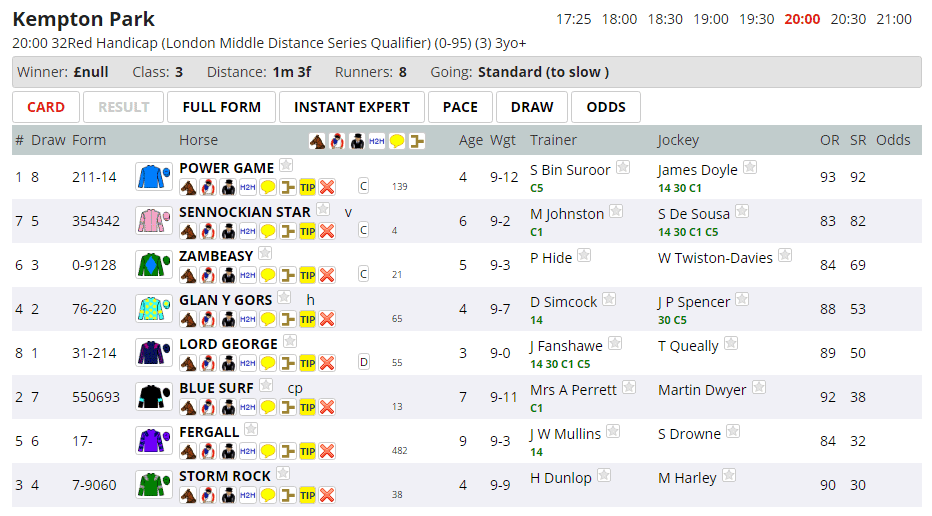 Horses For Courses is the report that is freely available to all users on a Friday, and it shows us that Power Game has a useful record of two wins and four places from his five runs here to date. He has definitely shown a liking for this surface, especially when it’s on the slow side, and appears a horse on the up.

If we delve a little deeper into the form at Kempton of Power Game by looking at the Full Form Filter, we can see that he has won his last two races here and they were both over a mile. He takes quite a big step up in distance today, however he was finishing extremely strongly in those races so it appears he could well be capable of getting the extra distance. His breeding also suggests that it isn’t out of the question either.

In fact, when expanding the Full Form Filter, we can see that his penultimate start was over ten furlongs at Chelmsford, where he won a better race and was again staying on at the finish.