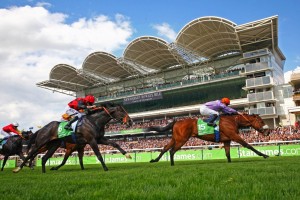 What do you think of the idea of driverless cars? Why would anyone in government wish to develop such a concept, although to be fair my car will be almost in that mode as it spends most of the coming month travelling between East London and Newmarket for three consecutive weeks of racing, interspersed with sales and the odd gallops trip, writes Tony Stafford.

I hope to make it in time for first lot probably on the Al Bahathri tomorrow as Ray Tooth’s Betty Grable (Delegator – Danella) takes her latest step towards an October debut for Hugo Palmer.

Then it’s three consecutive days, Thursday to Saturday, on the Rowley Mile. HQ will actually race for the following two Saturdays, but I’ll miss the first of them for Ascot on October 1 as long as Dutch Law makes it into the Totesport Challenge Cup field.

There are pattern races in abundance on all three afternoons this week, culminating in three major juvenile races, the Group 1 Middle Park and Cheveley Park Stakes supplemented by the Group 2 Royal Lodge on Cambridgeshire Day.

For at least a couple of years the Champions weekend here mirrored Ireland’s example by running over two tracks on successive days. Newmarket raced on the Friday and Ascot on Saturday, and we had the absurd situation of the six-furlong Middle Park being run on the same card as the seven-furlong Dewhurst Stakes, the latter often the crucial event for identifying the year’s champion two-year-old.

Two years ago there were six runners in each on that mid-October Friday, but that changed in 2015 and again this year when the Dewhurst, happily re-situated two weeks after the Middle Park, could conceivably be the target for that race’s winner.

I’ve just had a look back at the 2015 triple of Group-race juvenile races which attracted a total of 21 runners. You’d think that between them, such races would have thrown up a plethora of big-race winners, but you would be wrong. The best of the three in heritage terms was the Cheveley Park Stakes, won in impressive fashion by Mark Johnston’s grey filly, Lumiere.

She came back to the July Course in the summer to win a Listed contest, but could not add to that success in three other starts, all in top grade. Of the remaining six fillies, Illuminate (second), did not win any of her four runs this year; third-placed Besharah was equally non-achieving in five appearances and fifth to eighth Bear Creek (unraced), Sunflower (three runs), Rebel Surge (eight) and Shadow Hunter (five) all failed to add to the tally.

The glaring (or rather glowing) exception was fourth-placed Alice Springs, who returned a couple of weeks later to win the now-discarded Tattersalls sales race for fillies which proved an easy touch for the Aidan O’Brien filly, who went through the ring in Book 1 in 2014.

Tatts now give £25k per Book 1 winner for its first victory, spreading the joy, although when you buy in Book 1 you probably don’t need it. Alice Springs so far out-achieved her Cheveley Park counterparts that she has collected two Group 1’s this year – the Falmouth at Newmarket and the Matron, the other day at Leopardstown – with total authority.

So, hardly overall the expected list of future achievements. What about the Royal Lodge? I used to love it at Ascot, where it was initiated a few months after me in 1946, starting at five furlongs but elongated to its present distance of a mile two years later.

Apart from 2005 when Ascot was closed and it was temporarily housed at Newmarket, it was a constant in Berkshire, but the attempted BHA shake-up of the top autumn races meant Frankel in 2010 was the last Ascot winner of the race.

We know what he did afterwards, and what he’s doing with equal distinction in the breeding shed, but what of the 2014 crop? Well, I can tell you that its winner, Foundation, promoted to Derby favouritism after seeing off Deauville in pleasing fashion, never made it to Derby Day, or even the winner’s enclosure in any of seven runs during this year.

Runner-up Deauville did turn out at Epsom after finishing second to Foundation’s third in the Dante, but looked a non-stayer in 11th behind Harzand. His last two starts were both in North America, winning that valuable pot at Belmont before another creditable effort in third in the Arlington Million. Only one of the remaining four runners did anything at all this year, fourth-placed Humphrey Bogart winning the now downgraded to Listed Lingfield Derby Trial for Richard Hannon and Chelsea Thoroughbreds.

He took his chance in the Derby and fifth place was a fine effort, but he was some way back in Deauville’s Belmont win and beaten twice more since. Muntazah, third, was nowhere in two 2016 starts, getting to the track once more than Cape The Faith and Sixth Sense, each unplaced on their only start.

If you think that was pretty average, have a look at the Middle Park, won with such authority by Shalaa for the John Gosden stable. Sadly, injury prevented his running again and the sextet that followed him home amassed the proud tally of one win from 24 outings. That came when Steady Pace collected a little race at Meydan in the winter but the Middle Park third was unsuccessful in three races returned to the UK.

Runner-up Buratino never approached the level of his busy, productive juvenile campaign, running five times for no reward and Ajaya (two), Rouleau (two), Venturous (five) and Madrinho, seven runs, did nothing to enhance the reputation of the respected event.

Trainers usually have to choose between the Middle Park and Newbury’s Mill Reef Stakes and the way Clive Cox’s Harry Angel ran away with that prize on Saturday suggests he’ll do very well next year. He has an excellent example to follow – Ribchester, a top Group 1 winning miler, was Harry Angel’s immediate predecessor.

I’ve been anxiously scanning the 75 entries for next weekend’s big Ascot handicap in which Dutch Law stands on 99, 13lb below probable top weight Speculative Bid, who is unraced in 2016. Several of those who ran in the Ayr Gold Cup and other races last week might bounce above him while others are set to drop below after poor runs.

We’ll know that part of it in the morning, but it seems like we need around seven not to stay in of those above us to make the top 18. Hughie Morrison, who’s in such excellent form, thinks we’ve got a chance if we survive the cut for the race, over the same distance as his latest impressive win on the track. Ray, Steve Gilbey and I all hope he’s right.