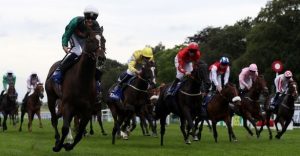 Saturday’s first day of the Arc meeting stages four Group 2 contests with the Group 1 Prix du Cadran run over 4100 metres (2m4 1/2f) the main attraction, writes Nigel Howard. This is the French equivalent of the Gold Cup at Royal Ascot and has unsurprisingly attracted a classy group of stayers.

VAZIRABAD is the hot favourite after his victory in the Prix Gladiateur on Arc Trials Day. The Aga Khan’s gelding tackles this distance for the first time but trainer Alain de Royer-Dupré wasn’t concerned, stating after that race, “The further he goes the better so the extra half mile of the Cadran won’t be a problem. He has a tendency to stop when he gets to the front so he needs to come late. He has a great turn of foot”.

Last year’s surprise winner MILLE ET MILLE ran a cracking race in the Ascot Gold Cup but hasn’t shown that level of form in two runs since. They were both over an inadequate two miles, however, and he is sure to appreciate the extra distance here. NAHUAL pushed VAZIRABAD all the way to the line in the Gladiateur and he looks an interesting each way chance.

For the Brits, Roger Charlton will be hopeful of a bold show from QUEST FOR MORE who has been in excellent form this term, winning the Group 2 Lonsdale Cup over two miles at York’s Ebor meeting before going down by a nose in the Doncaster Cup.

Equally, NEARLY CAUGHT, trained by Hughie Morrison, must have strong claims after he won the Group 2 Prix Kergorlay at Deauville (1m7f) in August beating a number of his Cadran rivals. The extra distance is again an unknown for the son of New Approach but the prevailing good ground can help his cause.

A great race in prospect then with a bold display from the British contingent looking assured. However, this race seems tailor made for VAZIRABAD who has had the Cadran as his main target all year.

The Prix de l’Abbaye is France’s annual gift to British racing with the home nation having only tasted victory in the race twice since the turn of the millennium.

It looks more than likely that Les Francais will have to wait at least another 12 months to add to that tally as the betting for this year’s event is again dominated by British based horses. Indeed, there are only three French runners in the line-up of seventeen.

Heading the market is MECCA’S ANGEL, who was last seen powering to a two-length victory over Limato in the Nunthorpe at York’s Ebor festival. She was denied a run in this race last year because of unsuitably fast conditions but Michael Dods’ mare looks almost guaranteed to take her chance this time around with the ground expected to be no faster than good.

Last year’s winner GOLDREAM was seventh in that contest and completed his preparation for this year’s race when finishing third behind JUST GLAMOROUS and MARSHA at Chantilly in the Prix Petit Couvert on Arc Trials day.

JUST GLAMOROUS was a shock winner of that race but there was little to suggest it was a fluke as French champion jockey, Pierre-Charles Boudot, broke smartly aboard Ron Harris’ charge to take the lead and record a decisive pillar-to-post victory, three lengths clear of race favourite MARSHA.

Clive Cox has had a year to remember with My Dream Boat and PROFITABLE both lifting Group 1 prizes at the Royal meeting. The latter picked up the King’s Stand Stakes over five furlongs but most recently couldn’t live with Mecca’s Angel at York. He might just be feeling the effects of a tough season but still he cannot be confidently ruled out.

Of course a Group 1 contest wouldn’t be the same without a runner from the Coolmore team and WASHINGTON DC bounced back from a poor run at York to finish second in a Group 2 in Ireland last time. This son of Zoffany is obviously well regarded and is another with a squeak.

The only juvenile in the race, ARDAD, heralds from the mighty stable of John Gosden. He receives a stone from the older horses and bids to become the first two-year-old to win this event since Sigy, trained by Criquette Head, back in 1978.

Of the French contingent, there is little doubt that FINSBURY SQUARE is talented but he is a difficult ride and this big field is unlikely to suit him. SON CESIO is trained by Henri-Alex Pentall who has a good record with his sprinters and he is likely to be the best chance of domestic victory.

MECCA’S ANGEL is the one to beat in the Abbaye, however. Her York run showed she is right back to her best. JUST GLAMOROUS was a revelation at this track last time and has to be respected whilst PROFITABLE is a Group 1 performer on his day and cannot be overlooked either.

The Prix de la Foret is the only Group 1 event over seven furlongs in the European racing calendar. This year’s renewal looks like an ideal opportunity for LIMATO to strut his stuff over what is arguably his optimum trip. The only chink in his armour would be ground softer than he prefers and in such circumstances he is vulnerable.

JIMMY TWO TIMES, trained by Andre Fabre, ran his best race to date in the Group 1 Prix Maurice de Gheest last time at Deauville over 1300 metres (6 1/2 furlongs): running on well in the final furlong to secure third place behind Signs of Blessing. This extra half furlong looks ideal and he is expected to go well.

SPECTRE has been in great form all season and her second behind Vadamos in the Group 1 Prix du Moulin was another example of her talents. She is also likely to appreciate this trip and should go close.

TRIXA ran well below her best behind SPECTRE in the Moulin. However, Alain de Royer-Dupre rates the filly and expects her to bounce back to her best on Sunday.

The Foret is a fascinating race in prospect as LIMATO will have to be at the top of his game to beat off a talented bunch of French horses. JIMMY TWO TIMES and SPECTRE look most likely to push him all the way to the line.