A 0-110 handicap chase over three miles and two furlongs here at Newton Abbot with a small field of just the six runners.

Louis Phillipe is at the top of the Speed Ratings and he is chasing a course hat trick. His previous race was over a similar distance and he finished it off in good style.

Tim Vaughan is in good form at the moment and he saddles Oscar Fiain here today. Champion jockey Richard Johnson is riding him so there is potential he could run well.

Louis Phillipe clearly thrives when running here at Newton Abbot. He has had five runs, with three wins and a place, giving a win P/L to level stakes of 22.50 which is an excellent return. You can see this detail when taking a look at the Horses For Courses report (which is free for everybody to on Fridays).

The only two runners to have any sections of green on the Instant Expert tab are Mrsrobin and Louis Phillipe. They both have form at the course and at this distance which are good plusses to have.

The remainder of the field do not inspire confidence on the evidence of this report in isolation.

Leading has a definite advantage over today’s course and distance, and that makes sense given the tight course here. We can see from the pace tab that over 26% of runners that have led have gone on to win the race, with prominent runners also doing well.

Mrsrobin is a confirmed front runner and it looks as though Oscar Fiain will be quite handy too. 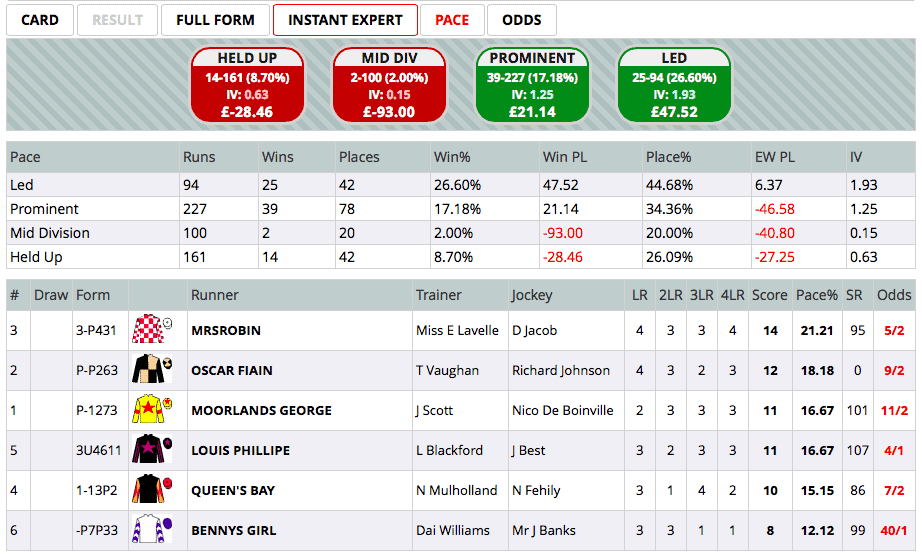