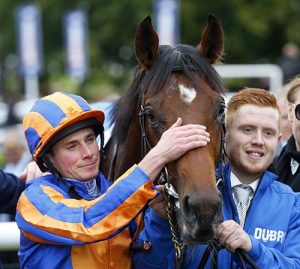 Churchill and Ryan Moore after winning The Dubai Dewhurst Stakes

Even before the metaphorical ink was dry and last week’s offering was on its way to you and the world via the mysterious ether, I was off and up the M11/A14/A1 to Pontefract, writes Tony Stafford.

This 4 a.m. lark doesn’t get any easier – <not impressed, Ed> – but after a short pause I was into a decent rhythm, making the track mid-meeting for the late running of the three-year-old mile and a half handicap featuring Harry Champion.

Two runs previously, five minutes after Dutch Law’s big win at Ascot, he’d looked a bit of a snail around seven furlongs of Kempton, nowhere near the sort of ability level Hugo Palmer and staff felt he had as a juvenile.

The big, almost desperate decision was taken to step him up, initially to ten furlongs at Redcar. After a sleepy, over-relaxed beginning there, he (as the comments said) plodded home in sixth, but more significantly, “it took until the end of the back straight to pull him up” according to jockey Marc Monaghan.

The obvious response was another extra quarter mile up the stiff Pontefract hill and Harry and Marc navigated it with flying colours, nabbing Mark Johnston’s pacemaking Kelvin Hall, to whom he conceded 10lb, less 3lb apprentice allowance, in the last five strides.

Hill, trip and softish ground all seemed not to bother this powerful gelding who previously had appeared a one-trick (all-weather) pony but not now. He’s in Tattersall’s Horses in Training sale and another winning effort back at Redcar (14 furlongs) on Friday, twice as far as Kempton, would either make him a target for jump trainers at Park Paddocks, or persuade Ray Tooth to retain him in the hopes of getting another Punjabi.

When that horse appeared at Tatts in October 2006, he’d run 14 times with three wins for Geraldine Rees, whose father Capt. Jimmy Wilson owned and bred him. The last of them came off 69 over a mile at Ayr, the longest distance he tried and at the sale he was rated 73. Harry has run 11 times for two wins, one last year, and I reckon in tomorrow’s new ratings he’ll be either 73 or 74.

Ten years on, why shouldn’t Ray think that particular type of Champion Hurdle-winning lightning could strike twice? Harry Champion appears sure to stay two miles over jumps. Cockney Rebel, his sire, has an excellent record with jumpers from an admittedly small sample, the ill-fated but talented duo Cockney Sparrow and Seedling leading the way.

So, Redcar it is, or is it? He’s the highest rated – 76, old rating of 70 plus 6lb penalty – of the 37 entered, unsurprisingly as this is a 0-75, but it’s not that straight-forward. Eighteen of them are three-year-olds, who even this late in the season have a 9lb weight-for-age allowance.

All through the late summer, trainers of older staying handicappers are routinely frustrated by the apparent leniency in weight terms for the younger brigade. The snag here though is that Redcar’s 14 furlongs can accommodate only 12 horses and even though there are very few races at longer distances to find around the country, Redcar sees fit not to divide, favouring sprints for that treatment, where 20 (therefore 40) can run.

Ten older horses have ratings above 67, so carry more weight than Harry. Five others are slap bang on 67, therefore equal with him. In those cases, a ballot is held at the BHA’s Weatherbys base before the confirmed list is published at noon the day after entries and sure enough, Harry came out bottom of the six.

I say sure enough advisedly. Mr Tooth has only two horses above two years old in action this autumn, the other being Dutch Law. Both at Ascot in the valuable Totesport race on Oct 1 and next Saturday’s Balmoral Handicap there, he shared (and shares) a critical borderline mark with other horses. From memory, I think it was three last time and there are four this week and he’s bottom of the draw every time.

Just as my conclusions about Galileo’s possible future eminence were more a function of arithmetic than equine knowledge – eight runners from his first bunch of three-year-olds on a single Royal Ascot afternoon – so my suspicions have to be aroused by an unlikely 71-1 treble, 3 x 4 x 6 to be bottom of the pile.

With only 12 getting in, there is actually a chance that a 0-75 race for three-year-olds and upwards could have none of 18 representatives of the younger group in the field, surely not the intention when the race was framed. Sir Mark Prescott could well be foiled of running any of his five candidates of that age, but my calculation is that Harry will be just about all right – never mind the others: sorry, Sir Mark.

His Cesarewitch favourite, St Michel, duly scraped into Saturday’s field, but faded late on as Sweet Selection probably surprised herself and maybe Hughie Morrison by living up to my lofty prediction on her behalf in the closing lines of last week’s offering.

I cannot believe that when people take facts like “17lb well in”, as she was on official handicap terms, they then fail to translate them to the distance of the race. A sprinter with a nominal 17lb in hand has approximately six lengths to work with. A slow start, gaps closing and progressive opponents could trim and even eradicate that advantage.

Over a distance like the two miles, two furlongs of the Cesarewitch, I reckon six lengths becomes more like 18, so it is much more probable that such a horse will take advantage. St Michel was almost as well favoured, as in the winner’s case, from the same Doncaster Cup form, but his tendency to hang was always a potential downside.

On Saturday I saw Malcolm Caine, owner with Gareth Bale’s agent Jonathan Barnett of Curbyourenthusiasm, who was sixth in the Doncaster Cup, almost four lengths behind fifth-placed Sweet Selection. Curb is rated 107, so actually it would have been quite in order for Sweet Selection to be awarded 108, especially as higher-rated Clever Cookie and Clondaw Warrior were further back. That would have placed her not level with top-weight Fun Mac on Saturday, but 4lb higher! She was indeed some certainty, but they still need the constitution to carry it off.

When you look back on what you’ve written over the years, there are always things you wish you hadn’t, and that goes for me, too. However, the person who started out the “Aidan O’Brien will be booted out of Ballydoyle in favour of up-and-coming David O’Meara” claptrap – was it last spring? – must be pleased with himself.

Maybe he’ll be writing, whoever and wherever he is, that the Coolmore partners were furious with O’Brien that he didn’t run a third horse in either the Fillies’ Mile, behind Rhododendron and Hydrangea, or the Dewhurst, Churchill and Lancaster Bomber, to equal the stable’s clean sweep of the Arc.

The part I liked the best about Newmarket on Saturday was that 66-1 shot and pacemaker Lancaster Bomber could collect a six-figure pay-out for “the lads”, also helping Aidan past £7m in Britain this year. Colm O’Donoghue came back and said: “He’s improving”. You couldn’t write it.