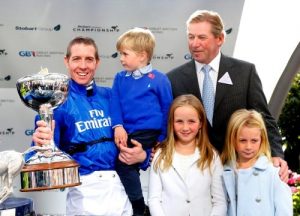 Jim Crowley was crowned champion jockey at Ascot on Saturday, with never a more appropriate racecourse for the celebration, the champ being born and raised only a few hundred yards from the winning post there, writes Ian Sutherland.

At the start of this year’s turf season, Crowley had his eyes firmly fixed on the all weather racing circuit. On All Weather Championship Finals day at Lingfield in March, Crowley confirmed his place in the top half dozen jockeys in that competition with a win in the (almost) two mile Marathon event on board Ralph Beckett’s Moonrise Landing.

When the turf season started at Redcar three days later, Crowley was priced at 66/1 for the jockeys’ crown, a price that was still available in the middle of July.  While it was not quite the odds of Leicester to win last season’s Premiership race, it was certainly a reflection of the chances of a man who had yet to post a century of winners in one year on the turf. That landmark was reached  with a double at Brighton in September, by which time he was describing himself as “obsessed” with the title fight. He and Silvestre de Sousa were neck and neck, the lead swapping hands several times as the season approached its climax.

But the century of winners and the jockeys’ title were not the only significant achievements for jockey Jim this year. He also had his first ride in the Derby on Algometer, and in September joined a select band, including Fred Archer and Sir Gordon Richards, to have ridden 45 winners in a month. He may even have set a new record with his win on Castleacre at Newcastle on the last day of the month. (Such things as jockey records are never easy to categorically confirm in Britain, alas).

That’s a far cry from the somewhat more forgettable first Crowley ‘achieved’ in April 2001. In those days he was a jump jockey, riding mostly for Sue Smith. However, record-breaking trainer, Martin Pipe, put Crowley up on Art Prince in the Grand National of that year. It was a day he would probably prefer to forget, as his only ride in the race ended with a fall at the first fence.

How things have moved on for Crowley, and how he has shown himself truly to be a man for all seasons.

Stat of the Day, 17th October 2016 The Best Jean-Claude Since van Damme?
Scroll to top