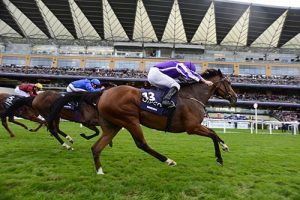 What did you know about Jean-Claude Rouget: before Saturday, probably not a lot? Until this year I’m sure not too many were even aware of the 63-year-old Frenchman, especially in Ireland, writes Tony Stafford. Until September 10th and the Curragh end of Irish Champions weekend, according to the usually accurate Racing Post stats, he’d never had a runner in that country before Almanzor and Qemah pitched up.

Forays from his base in Pau, down in the southwest of France, were much more frequent to the US with his best horses and considering he’d been challenging and then passing Andre Fabre in recent years domestically, only sporadically had he ventured across the Channel.

He had his first English runner, Pinson, in 2005. Two years later, was busier, as Rouget collected the Champion Stakes with Literato, beating the Coolmore-owned Eagle Mountain in a photo-finish. That year the Danzig colt US Ranger, carrying the dark blue colours of the Coolmore team in partnership with his breeder Joe Allen of War Front fame, was seventh in Cockney Rebel’s 2000 Guineas and third in the Jersey at Royal Ascot.

Those same Racing Post statistics list 150 or so major wins, quite a few in the US and with many repeats. Yet in the seven seasons between Literato and last year when Ervedya won the Coronation Stakes, only 18 further Rouget runners and six places were recorded. Then, memorably each time at Ascot, France’s top trainer was to repeat earlier triumphs, with Qemah in the Coronation and Almanzor in the re-modelled Champion Stakes, from just five English runs.

I think he’s warming to us a bit though, even if when interviewed he’s still a bit more Yves Montand than Johnny G. He must be, why else would he still be looking at yearlings at Book 3 of last week’s Tattersall’s October Sale?

Then again, having 265 horses listed in Horses in Training for 2016 and having run a healthy proportion, 178 of them in France this year, he is as near in terms of home dominance as Aidan O’Brien has been as a Group 1 trainer all over Europe.

His horses have run in 622 races in France, for 157 wins and win and place money of Euro 6,523,465, bolstered by just over Euro 3million in owners’ premiums for French-breds. In comparison, O’Brien’s raids in France, with just 15 horses and 16 runs have brought two wins, seven places and Euro 5,142,970, with just some chump change (23k) in premiums – not many Galileo’s are French-bred!

Rouget’s day out in Ireland brought the equivalent of £547,059 – Almanzor winning the Irish Champion from Found and Minding, and Qemah was third in the Matron Stakes behind Alice Springs. Almanzor propelled him to £1,071,670, healthy enough, while Found’s second to the Rouget star and Minding’s superb display in the Mile, took their trainer to beyond £8million here.

If Almanzor was the obvious star of the show, Minding’s versatility and class were the bright point of a slightly disappointing day for Ballydoyle, with Order of St George, back at staying trips and Seventh Heaven, in the fillies and mares race, both looking a little sluggish as they tried in vain to overcome modest starts.

In winning a seventh Group 1 race by the age of three, she shares that distinction with the great French filly Miesque, who went on to win three more races at the top level at four years of age in 1988. With records there to be beaten, Minding, whose 2016 winning programme of 1,000 Guineas, Oaks, Pretty Polly, Nassau and Champions Mile might have been even better without the bang she sustained to the head when leaving the stalls for the Irish 1,000, when beaten by Jet Setting – an unplaced 33-1 shot behind her on Saturday.

In the end Ribchester got to within half a length of her with a strong late effort, but there was never any prospect of her forfeiting the lead she took under Ryan Moore at the two furlong pole. Indeed had the race been over six furlongs, Minding would almost certainly have won it. An Oaks winner fast enough to sprint [against milers, Ed.], the mind boggles.

I spent most of Champions Day moaning about the fact that, as predicted here last week, Dutch Law didn’t get into the Balmoral Handicap. He needed two to come out by 1 p.m. on Friday and none did, hardly surprising as all 45 confirmations from the Monday, were declared to run.

Equally unsurprisingly, one did come out after that deadline, Instant Attraction’s defection making it totally annoying for the Saeed bin Suroor stable, their Silent Attack denied a run by a rule that should be changed. Why it is deemed impossible to allow changes until the 45 minute declaration time? The rules of that particular race – worth a handsome £155,000 to the winner – permit three reserves, so why can’t they be just that, on the premises in case of absentees.

It was good to see Jim Crowley and Josephine Gordon receive their well-earned awards for champion jockey and apprentice, but a little bird tells me that gentleman Jim might have a fight on his hands to retain the title, as someone quite close to agent Tony Hind has reportedly had a bit of a punt on Fran Berry for next year. He or she might well be working on charming the super-agent to concentrate on Ralph Beckett’s stable jockey.

It was less sensible that Godolphin, 131 wins and £4,681,091, should get the award for champion Flat owner. Most of the £8 million collected by O’Brien, comes from the Magnier, Tabor, Smith triumvirate, but for the table’s purposes, Smith, Magnier, Tabor is a different owner from Smith, Tabor, Magnier. One Smith part of the team also got into the £4 million plus bracket thanks to Minding and King George winner Highland Reel’s exploits, but then again if they had won it (under different rules) they’d have had to cut the trophy into thirds.

They’ve still got a fast-improving and relatively fresh Alice Springs, so dominant in the Sun Chariot, and Arc runner-up Highland Reel, among a good few more to go to war with at Santa Anita with an extra couple of weeks to recover from recent exploits.

Doncaster on Saturday could offer another obvious chance for such as Capri in the Racing Post Trophy, but I’ll be surprised if Raheen House passes up the attraction of that race after winning nicely at York for Brian Meehan and owner Lew Day.

I doubt if Lew will be there, but just as after the Cambridgeshire and Spark Plug, I’ll be offering my services as trophy collector, should this promising son of Sea the Stars step up. It will be even better if Dutch Law can take the finale as consolation for last week’s Balmoral frustration for Raymond Tooth.

Jim Crowley: The Champ for All Seasons SotD Update, 10th to 15th October 2016
Scroll to top