As you know, we like to deal in “told-you-so’s” in this corner – especially when we remember, writes Tony Stafford. Two instances come to mind, one this year, well actually late in the summer and one last year at Glorious Goodwod. 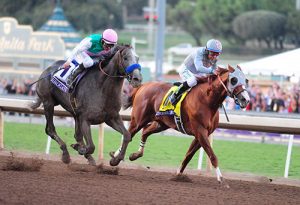 I don’t know about you, but when a lightly-raced horse slaughters the rest of the remaining fragments of the present Classic generation in a million-dollar race, I think it’s time to take notice.

So that’s what I did when confronted by the facts – and soon after, the video – of Arrogate’s Travers Stakes at Saratoga. Coming to that race, the Juddmonte Farms-owned, but unusually, not-bred colt, had won four races after making his debut with a third in April, nothing more substantial than a Listed race he’d won with not too much comfort at 10-1 on previous time out.

For the Travers, he was not even Bob Baffert’s prime contender in the eyes of the betting public anyway, Arrogate starting around 12-1 compared with stablemate American Freedom, a 5-1 shot. Creator, winner of the Belmont Stakes and Exaggerator (Preakness) trailed in well behind as Arrogate beat American Freedom by 13 lengths in record time.

An hour or so earlier, my thoughts went back to the 2015 Gordon Stakes at Goodwood, once a prime step on the route to the Voltigeur and St Leger, but that time more a consolation prize for Highland Reel after he’d not lived up to expectations in the French 2,000 Guineas after a promising first season.

It took some energy for him to assert over fellow three-year-old, Scottish, but their paths since could hardly have been more divergent.

At the time of the Goodwood race, Scottish was owned by Jim and Fitri Hay, trained by Andrew Balding and carried a handicap rating of a modest 95. Perhaps when the Coolmore team looked rather sceptically on the form, it was not helped again when Scottish could finish only fifth of seven in France next time.

But then he lived up to the new 108 listing by winning the Doonside Cup at Ayr, before being acquired privately by Godolphin. It was still small steps for the new owners this year, Scottish collecting three Group 3 places to go with another Listed win at Newbury. Then, though, came the big explosion, Scottish joining the John Ferguson expedition to Australia and paying the boys in blue back with second and 220k in the Caulfield Cup last month.

Incidentally, one of the other Fergie explorers, Francis of Assisi, made it two late-season wins Down Under with a ten-length romp in a handicap last week.

In the meantime, as befits a horse with apparently ultra-soundness, Highland Reel had run 11 more times for three wins and a string of lucrative placed efforts before lining up with his Arc dancing partner Found in Saturday’s Turf race.

To suggest it was a spectacular performance to make all as he did was an under-statement. Seamie Heffernan made light of the outside draw to take him to the lead after 50 yards and they never saw another rival. The image of their careering eight lengths out and clear of a field including ex-French Flintshire, Found and the best Turf Americans – if that is not an oxymoron – will stay long in the memory.

I’ve suggested to Aidan O’Brien more than once, but quite early in the piece, that Highland Reel could be the new St Nicholas Abbey. He and Found took turns to sweep up the big money at Chantilly and a decent portion in California to take both past St Nicholas Abbey as Aidan’s largest money earners.

He’s also the one horse you’d like to take next autumn for the same race at Del Mar, even sharper than its counterpart further down the Pacific coastline. Wish I could go back and stay again in the Hyatt at La Jolla!

Found may be drawing stumps at the end of this year, but the trainer didn’t seem to want to answer that question posed by Matt Chapman after the race. She’s just topped the £5m mark with Highland Reel less than £100k behind, but that’s the Racing Post’s pre-Brexit vote calculation, so it should probably be more. St Nicholas Abbey would have been considerably higher without the interruption to his three-year-old career and premature finale as a six-year-old.

Jonathan Barnett and David Manasseh are well-known racehorse owners and Barnett, along with partner Malcolm Caine will remember Breeders’ Cup Saturday as they won a nice race at Chelmsford with their stayer, Curbyourenthusiam.

Messrs B and M might also reflect as they try to succeed at the racing game that the last contract they negotiated on behalf of Gareth Bale with Real Madrid, apparently means he will collect £10 million, the total earnings of the two Ballydoyle champions, merely by attending work for the next seven months.

While everyone has been over In the US, it’s been horrible first anticipating and then hearing confirmation that Freddie Tylicki has suffered paralysis after his part in a four-horse and -jockey pile up at Kempton last Monday.

Nobody has a bad word to say about Tylicki, who at the age of 30 was just poised to start benefiting from the strides he’d made steadily over the years, not least with the support of James Fanshawe.

After the boss sold a couple of horses at the sales last month, it was nice that Table Manners, the Dutch Art half-sister to Harry Champion chose last week to win for the first time for trainer Wilf Storey in the colours of Geegeez.co.uk. Now, where do I know that name?