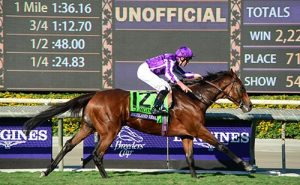 Breeders’ Cup XXXIII (or 33, as we like to say over here) was a feast of high class racing action. Although many of the main characters, let alone the bit part players, would be unfamiliar to most European viewers, the quality and competitiveness of the racing will have shone through the cathode ray tube in even the most grizzled of black and white tellybox households.

The problem with quality competitive races is that it makes punting fiendishly tricky. Last year across the same weekend, I’d managed to land on some bumper payoffs, and shared those suggestions with subscribers to the geegeez Breeders’ Cup Compendium. Winners at 25/1, 14/1, 12/1, and on, were unlikely to be repeated; sadly, the reality was that winners of any colour were very hard to come by at a meeting where just one favourite obliged, and he was 12/1 for most of the day in UK.

Although there is a silver lining to this story, here in unnervingly realistic technicolour is my take on the picks in that report, race by race, along with the videos, so you can judge for yourself whether we were unlucky or I am merely deluded.

It started Friday night GMT, with the

Three decent value calls here, all easily beating SP. Good Samaritan was comfortably the best horse in the race but suffered a tough trip. He’s one to follow.

“On the first turn, it looked like the horse in front of me clipped heels so I had to take a hold of Good Samaritan and wait a little longer. After all of the (early trouble), he responded very nicely. He´s a good horse” – Joel Rosario, jockey

This was really all about Dortmund, who was massively disappointing. Many people’s banker of the weekend – including mine – he was cooked turning in, along with a number of my own good-looking multiples.

“I was further back than I wanted and was five, six wide so it was very difficult for La Coronel to win from there” – Florent Geroux, jockey

A winner, albeit for fun stakes, and good runs from our other pair to make the line up. All well in front of SP again.

Stellar Wind lost this at the start: she gave the other two at the head of the market five lengths or so at the gate, was sent wide rather than inside around the home turn costing more ground, and stayed on behind the duelling leaders inside the final quarter. This looked a pretty average big race ride to me.

Yellow Agate had a troubled passage – almost clipped heels – but was probably not good enough in truth. Jamyson N’Ginger was last at the end of the back stretch and managed to pass six of her rivals, but the birds had flown. She too got chopped at the start.

An inspired Frankie ride on Queen’s Trust to win this, and I got the bet here totally wrong, not that I’d have been on Frankie in any case. Seventh Heaven is more of a 12f filly than 10f, and she ran like it. Catch A Glimpse was a fair call, running well for a long time, but the bet was over-staked – should have been ¼ pt e/w.

The Indian had been on the go a long time, and that may have been the issue here. So too may have been the trip west, though he’s proven on the road having won at four different tracks in 2016. Either way, he didn’t bring his A game to the table, and was never in this. Disappointing effort. Hats off to the winner, another huge Baffert improver.

Ugh. I was happy to take three shots here, but they should have all been penny plays in a wide open race. I over-staked by two here. Amazingly, this was the one race the favourite won in the entire meeting. He was a ‘class turnback’ horse (Grade 1 performer dropping to 6.5f), the same as Celestine and A Lot; and that angle seems to hold sway at the moment over the course specialists when the Turf Sprint comes to Santa Anita. It’s a wacky race…

Another wide open race. Theory ran a limp sort of race, but Lookin At Lee was a place away from hitting the board. In fairness, he was a couple of lengths behind the third but his jockey might have asked for more earlier. No real complaints though. The second horse, Not This Time, was a bit unlucky and quotes of 14/1 for the Kentucky Derby for a locally-trained colt who should relish the longer distance are reasonable, though not especially exciting.

I wrote this in the guide:

I have backed Flintshire. I think he has a rock solid chance to become the first horse aged six or above to win the Turf, and I will win a pretty penny if he does. My historical hoodoo in the race, however, means you’d probably be foolish to follow me in, even though his price on the day ought to be slightly shorter than the current 5/2 (11/4 Betway if you can get on with them). Found deserves enormous respect for her exploits over the past two seasons, and she’s an incredibly consistent top class mare. But surely this is a bridge too far. Surely! Highland Reel is a slightly fresher horse, and the pace – or lack of it – in the race could play into his hands. He has real class, and I think he’s the biggest danger. Of the rest, there will be worse each way bets over the weekend than Money Multiplier, and Ulysses would not be a shock winner if living up to the murmurings.

The winning ride was as enterprising as it was predictable, and I should have had a saver on it in the picks. But it should have probably not been necessary had Javier Castellano not been caught in a trap – horses front and right – at a key juncture in the race. The pain of this race just keeps burning…

I. Hate. This. Race. (I just watched the tape again, and it looks worse every time I see it…)

No real excuses, just a couple of sub-par efforts, though Haveyougoneaway probably should have been racing earlier, having tanked into the straight.

I have no idea how Tourist won this. He showed hitherto unseen dash to repel Tepin’s game charge. Maybe it was the sizzling pace which he’s not faced too often in his races. Ironicus did what Ironicus now seems to do, and finish fast and (too too) late. This race rather summed things up, with the win bet finishing 2nd and the each way play smashing SP and finishing 4th.

A winner of the finale, and a terrific race, too. We might have nicked a couple more place shekels as Hoppertunity just failed to collar Keen Ice in the last stride. The top two were eleven lengths clear, and are probably the best pair of racehorses in the world right now. If you haven’t watched this year, it’s worth the time. Arrogate is a machine.

At the end of it all, as a result of some tough races, some tough luck, and some poor staking/picking, we finished down 15 points. Ouch. It was five weeks of work to produce 15,000 words, pace charts, stats tables, form summaries and so on… and when it pans out like 2015 it is a thing of wonder. When it pans out like 2016, it is a desperate waste of time. Alas, we only know after the fact which it will be: the effort expended was the same, the results achieved polarically different.

It will be little consolation to most that I crashed and burned as badly as those who followed me in. However, what may be of some consolation is the following…

I mentioned on Saturday that I had decided to donate £10 (50%) from every gross sale to the Injured Jockeys’ Fund in light of the unthinkable news about Freddy Tylicki. Partly as a result of how things went picks-wise over the weekend, and partly because it’s just a decent thing to do, I’m not going to send them 50%. I’m going to send 75% of the gross revenues.

201 of you signed up for a copy of the Compendium – you can download it here if you want to have a flick through – for gross sales of £4,020. Although I have to pay a handful of affiliate commissions, plus VAT, PayPal fees, and tax on all of those sales, I will pledge £3,015 to IJF on behalf of the geegeez readership. I’ll take a small hit financially, and write off a lot of work time. But so what? It’s irrelevant in the grand scheme when sat next to, well, most things in truth, but certainly the events of Kempton Park last week and the distinctly unwelcome lasting legacy of that afternoon.

I’m really sorry results were so frustrating/disappointing/naff* (*delete as applicable), but at least we’ve been able to support a fantastic charity at a time of keen focus.

In the coming days, when I work out how to, I will add permanent buttons for visitors to donate directly to either of IJF or Racing Welfare any time they’d like to. That is, of course, entirely optional, but if, say, you have a nice win – perhaps because of the toolkit inside Geegeez Gold – you might like to send a couple of coins to a worthy cause.

Thank you so much for supporting the Compendium and, for those who only signed up because of the charitable element, special thanks. To all, I’m really sorry it didn’t work out better this time.

Race of the Day – 9 Nov Not feeling too grand?
Scroll to top