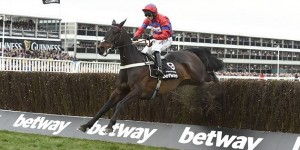 Yesterday afternoon, as usual I had no idea which direction this article would be taking, writes Tony Stafford. Switching between channels, it was by chance that I caught Nicky Henderson’s emotional interview with Lydia Hislop on Racing UK in which he revealed that Sprinter Sacre had sustained a tendon injury and had been retired forthwith.

So after a career of 18 wins from 24 starts, more than £1.1 million in prizemoney and a string of improbably authoritative performances, the 10-year-old’s future appearances would be limited to ceremonial parading at racecourses, beginning yesterday.

How awful then was it that just an hour later, Simonsig, his contemporary and for a couple of years, potentially the nearest to him in ability at Seven Barrows, should be dead. His immediate predecessor in the parade for the Shloer Chase, Simonsig got only as far as the third fence where he fell and broke a leg.

There is far too often in jumping the reality of “the king is dead, long live the king”. Unfortunately in many cases, his reign may be of limited duration. Anyone watching the Shloer Chase would have been impressed by the winning effort of Fox Norton, trained by Colin Tizzard. The West Country farmer is the jumps trainer of the moment, with his influx of horses owned by Ann and Alan Potts, as well as recent acquisitions like Fox Norton, a big-money buy out of the Neil Mulholland string.

But having suggested the Tingle Creek Chase as the obvious initial target, Tizzard later revealed his new star had a cut on a leg, but “right on the tendon”, something which will exercise the trainer’s thoughts before any more concrete plans can be laid.

The Potts family’s decision to switch so many horses from Ireland, principally from Henry de Bromhead, and mostly to Tizzard, continues the actions of a number of major owners. Much publicised moves by the even bigger strings of Michael O’Leary’s Gigginstown House Stud, away from Willie Mullins and generally to Gordon Elliott and a year or so previously, Paul and Clare Rooney from Donald McCain had to produce an effect.

McCain struggled for a while to recover, not least because the amount of investment needed to upgrade his facilities had been considerable. He seems in better form now and started 2016 with more than 100 named horses in his string. Even Mullins, shorn of 60 Gigginstown animals, many among the better ones in his stable, is demonstrably playing catch up with Elliott, who had an amazing 18 runners on the one Naas card yesterday.

Such overwhelming numerical domination can be counter-productive, such as Elliott’s having five of the seven runners in the main race, the Lismullen Hurdle while Mullins had a single candidate, Shaneshill, the favourite. De Plotting Shed did best of the Elliott quintet in second, caught late by Noel Meade’s Snow Falcon, while Shaneshill plodded on for third.

As with the two Henderson stars, injury always threatens jumpers, often the best of them, as with the recent news that Vautour had been found with a broken leg after being turned out in his paddock after exercising.

One of the best of the Rich Ricci horses over the past three seasons, Vautour had struck a chord with Ruby Walsh who regards him as one of the best he’s ridden. Unlike Mullins, Gigginstown House do not seem to hold any argument with Walsh, who in the absence of the injured pair Bryan Cooper and Jack Kennedy, has been employed selectively, especially on former Mullins inmates.

Another high-profile horse to suffer at least temporary injury over the Cheltenham Open meeting was the Ben Pauling-trained Barters Hill, pulled up after leading to the seventh fence of his chase debut. The six-year-old was unbeaten in seven races (four bumpers, three hurdles) until fading into fourth behind Unowhatimeanharry in the Albert Bartlett Novice Hurdle last March.

Pauling, a former Nicky Henderson assistant, had a good third season with 26 wins, after nine and then 20, and another nine so far this term suggests the upward trend will continue. He is one of the many trainers to have secured some of the Rooney horses, but will need the likes of Barters Hill to return to help continue the upward trend.

For a while on Sunday, it looked as though Pauling’s A Hare Breath, who landed a spectacular gamble at last year’s Open meeting, was going to do the same again in the Greatwood Hurdle, but he had a little difficulty in getting a run as four came to the last with equal chances.

In the end it was the Skeltons’ North Hill Harvey, confirming once again that Dan can lay one out for a valuable Cheltenham handicap hurdle, who showed the best battling qualities. Skelton’s skyward mobility is even more obvious than Pauling’s, figures of 27, 73 and last season 104 seemingly vulnerable again as he already has 43 on the board this time round.

The most obvious requirement, apart from talent, human and equine, is numbers and as with McCain in his busiest phase, Lodge Hill, near Alcester has been a place of constant renewal. That said, if recent (and indeed historical) results are anything to go by, nobody is going to threaten Paul Nicholls’ supremacy. He won four races yesterday, 12 in the past fortnight and with 69 wins at 32% this term, is running at the best-ever percentage of his amazingly consistent career.

Nicholls is probably the best among leading trainers at bringing horses back successfully after an absence and Aerial at Fontwell made light of a 17-month absence to win the 15-runner Southern National.

Smaller stables are less able, or indeed willing to go the jumping route. One trainer I’ve known for many years, made his living 25 years or so ago principally with jumpers, but now is almost pathologically against running horses over obstacles.

One horse he has at the moment, won a hurdle race for his previous trainer, but despite this, he prefers to keep him to low-grade Flat races, especially now that he has Newcastle all-weather on the doorstep. “I’ve lost so many good horses over the years, some killed outright, but almost all of them get knocked to bits just running over jumps”, he says. “I won’t do it anymore.”

Thankfully, Sprinter Sacre will not be asked to make another wonderful comeback, but sadly Simonsig and his owner Ronnie Bartlett no longer have that option to consider.