One of the great things about the geegeez community is that it is now starting to have more of a direct impact in the sport we all love. Having begun from very humble beginnings, we have developed relationships with all parts of the sport, whilst retaining the personal touch in all dealings with our readers and subscribers.

In recent times, I’ve been keen for us to extend our ‘brand presence’ (yuk!) on the track. Put in more palatable terms, I think what we’re doing at geegeez is pretty cool and I’d love for more people to know about us. As well as you lovely guys and girls sharing your experiences, it is important for us to try to force the name into the wider racing consciousness. We do this in a number of ways:

Geegeez syndicates a number of horses at any given time. Currently we have three in training with Anthony Honeyball – The Geegeez Geegee, Dragoon Guard and East Wing – as well as a yearling in his care. The Geegeez Geegee is a three-time winner who will be back on track in the coming weeks; Dragoon Guard has finished in the frame in three of his last four starts. East Wing is a full brother to the decent pair, Coeur Blimey and Just Get Cracking, and he should be making his debut in the four to six weeks, all being well.

Table Manners wins – at 25/1 – at Newcastle earlier this month

We also have a filly called Table Manners in training with Wilf Storey. She easily won her most recent start, at Newcastle… at 25/1! She’s being aimed at another race at the track towards the end of the month: it will be a step up in grade but she’s earnt it with the manner of her recent win. Until recently, we had another lad with Wilf, called Nonagon. You may have read about his very sad demise in this post, and he was a horse who, when conditions came right for him, looked a good bit classier than the bare numbers. He won two for us and was in the process of winning again when injury struck.

I’ve just taken an option on 75% of a two-year-old filly with Wilf, half of which is syndicated already to myself and a couple of regular syndicateers, Jim and Pete. That means there are three 1/8th shares available.

The filly is well bred, by Dutch Art out of winning sprinter, Catfish, and is available on a free lease. That means there is no ‘up front’ payment, but it also means that if she turns out to be very good, there will be no sale dividend at the end of her racing career. The balance of probabilities is that we are getting the best of that proposition.

She was owned, like Nonagon and Table Manners before her, by Raymond Tooth and, like that pair, was considered not good enough to stay in training for her previous trainer, in this case, Mark Johnston. He has to fill his boxes with his next crop of expensive yearlings, and some need to make way. In the case of the two before her, it was simply immaturity that precluded their winning on the track: most horses are not bred to be precocious enough to win at two.

Catskill has had sore shins in training this season, often a sign of being asked to do too much too soon. But what it does mean is that she’s been broken, ridden, has done stalls work and gallops: in other words, she’s quite close to a run. Her shins have settled down fine and we’re not expecting any recurrence of the growing pains she endured earlier in the year.

According to Wilf, who is enough (and more) of a gent not to offer me a horse he doesn’t think can cut it on the track – he has 100% winners to runners on the two he’s sent our way so far – she’s pretty nippy and she’s almost ready for a run. He feels she’ll be on the track at Newcastle before the turn of the year.

This then is a ‘no money down’ lease opportunity in a filly who will be racing within four to six weeks for a very affordable £135/month, plus racing expenses. “Racing expenses” are such as race entry and jockey riding fees, and amount to something in the region of £200 per race. So if the filly ran once a month, it would work out at £25 per syndicateer in racing expenses and £160/month all done. That’s a pretty good budgetary mark from which to work.

You would obviously be eligible for 1/8th of any and all prize money won. You’ll also have owners’ badges each time she runs, affording you a more pleasurable experience as befits your status as owner! The initial syndicate term would be for one year, with an option to continue at the end of that time.

If this might be of interest, please drop me a line. But be quick as there are only three places available 🙂

Another thing I’ve been keen to do since the emergence of Geegeez Gold is to support trainers and jockeys. Geegeez is delighted and proud to sponsor Anthony Honeyball Racing, with the vast majority of his horses carrying the geegeez.co.uk logo across the chest on the silks of their jockeys.

Geegeez also sponsors two jockeys now. The first name on our sponsorship roster was the excellent, and somewhat under-rated, David Probert. He joined forces with us early in the flat season and, though injury – a broken wrist – curtailed his year by two months, he is now back in the saddle, as evidenced by this snap when on duty at Lingfield for the boys in blue earlier in the week. 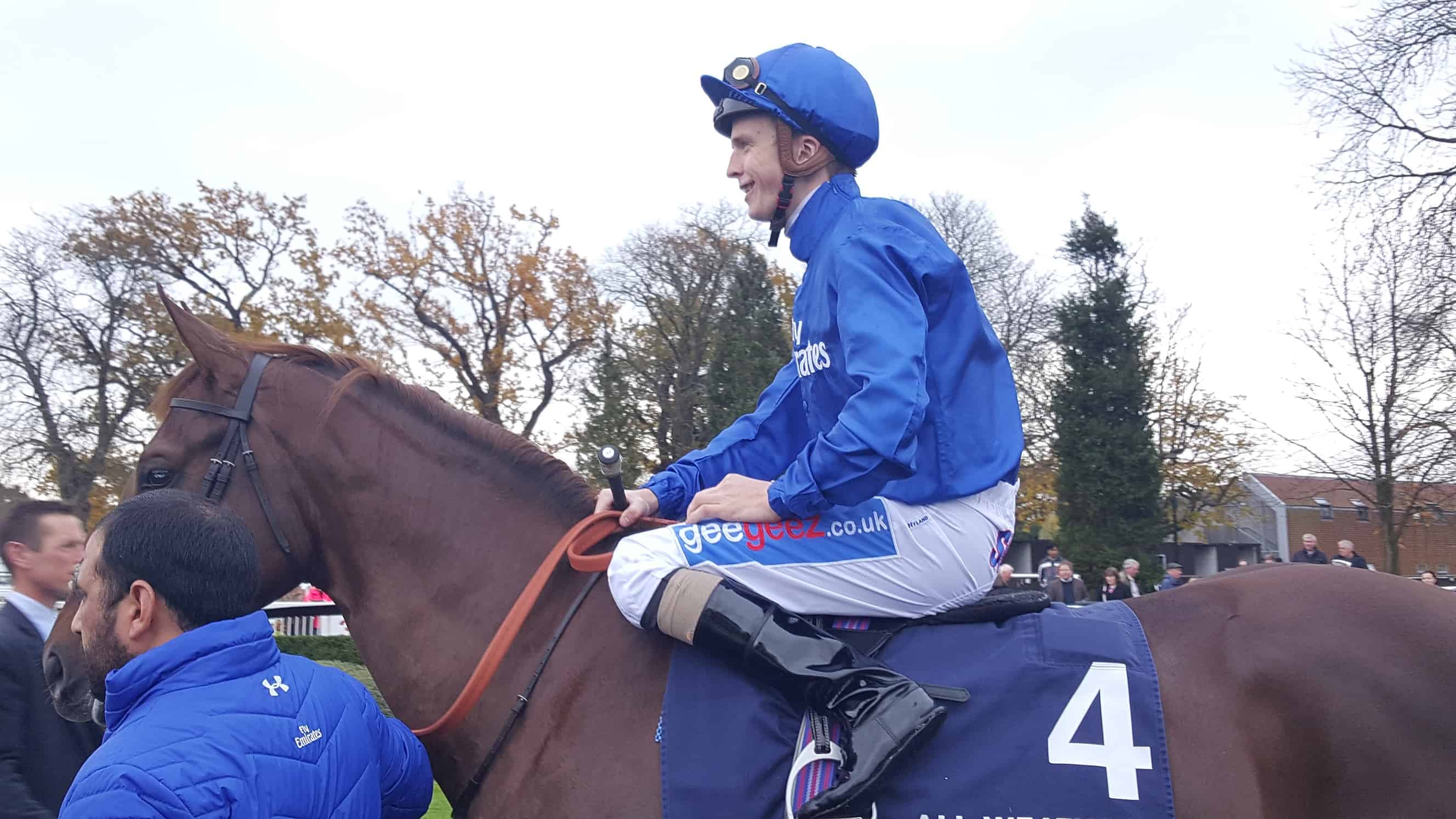 In addition to David, I’m delighted to welcome Mitch Godwin to the geegeez.co.uk fold.

Mitch will be a new name to many of you, but he’s ridden 24 winners in 2016 so far. Attached to the Silvester Kirk yard, Mitch is hoping to have a good crack at the apprentice title in 2017 and, while that might be a tad ambitious, it’s good to aim high. Who knows? With a solid work ethic and some breaks along the way, he has a shot.

He’s already ridden out his seven pound allowance but still offers trainers a handy five pound concession when legging up on their horses.

Here’s Mitch in his catalogue pose modelling the geegeez.co.uk breeches and under-vest.

Both Mitch and David have sloped off for a bit of sun – Mitch to Santa Anita for a week, David to a jockeys’ challenge in Barbados – but both will be back soon to boot home winners through the winter.

Keep an eye out for these two jockeys if you’re going/watching racing on the all weather in the coming months, and cheer on those lucky pants!

One of the side effects of sponsoring jockeys, particularly a jockey who had a nasty fall earlier in the season, is a keener appreciation of the dangers they face on a race to race basis.

As punters it is easy for us to forget, ignore or otherwise overlook that daily peril – perhaps because the consequences can be too grisly with which to wrestle in our leisure time.

But we were all forced to put aside any preference to deny the existence of danger in the aftermath of the terrible injuries suffered by Freddy Tylicki in a fall at Kempton recently. He has serious paralysis and the prognosis, physically, is not good.

Thanks to you, we were able to help Freddy – and the Injured Jockeys’ Fund – in a small but significant way by sending a donation of £3,015 representing 75% of the revenues from my recent Breeders’ Cup Compendium report (the remaining 25% will cover some of the associated VAT, tax, payment processor and affiliate fees that are incurred in selling stuff online).

On behalf of geegeez readers, for your kindness I received this short message of thanks from the IJF: 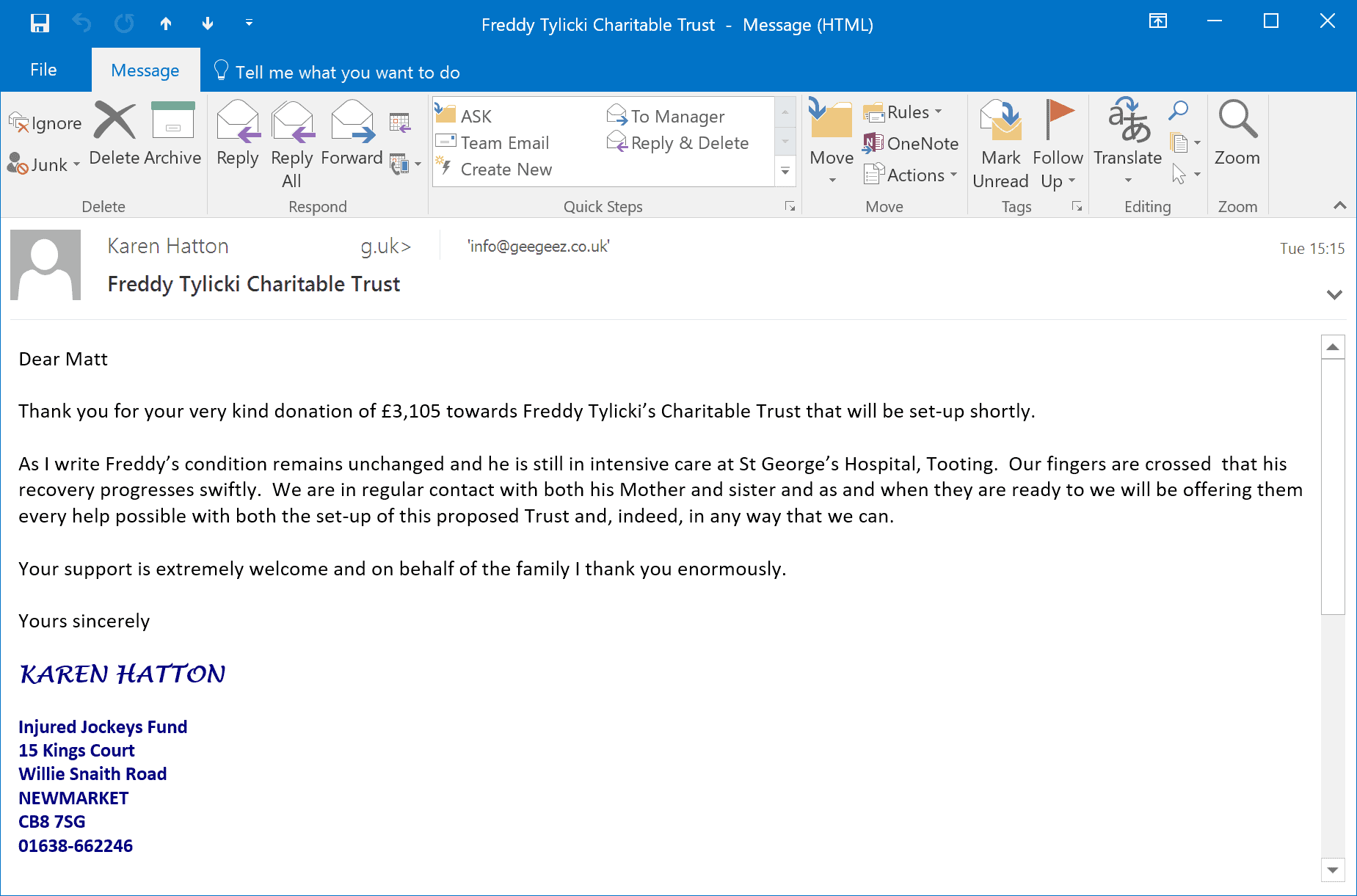 Since receiving that note a couple of days ago, Freddy has left intensive care and has transferred to the general spinal unit at the hospital. That is good news, though the road ahead is no less fraught for him and his family.

I don’t really want to write anything more about this, because – in truth – aside from being a kindred compassionate soul like so many of you, it’s none of my business. I know we all wish Freddy and his family every strength.

Why am I writing all of this? Well, apart from the horse syndicate opportunity above – let me ASAP please if you’re interested – no major reason, except that a) you might be wondering why you’ve seen geegeez.co.uk on a jockey’s kit – or might want to look out for them in future, and b) to demonstrate, in a variety of different ways, the commitment that geegeez.co.uk makes to putting back into the sport.

Your Geegeez Gold subscriptions are re-invested into the development of new tools and features – some quite big news coming soon on that score – and, beyond that, to telling people about us whilst helping individuals like David, Mitch and Anthony. And, of course, being able to facilitate a sizeable charitable donation on behalf of our community is my privilege.

geegeez.co.uk has no shareholders, we are still a small team (but growing), and we remain commited to both your enjoyment and to the sport we all love. Which is pretty cool!

So, in case I haven’t said it for a week or two, THANK YOU very much for your continued support.