As we head into winter, and the National Hunt season proper, it is time to shift our focus to various angles which might help us carve out a profit during the months with the short days and long nights.

One somewhat esoteric route is following bloodlines. As with trainers and jockeys, once a sire becomes ‘fashionable’ the value in the price of his progeny often evaporates. But there are always new routes in to the bloodstock puzzle.

In no particular order, then, here are five National Hunt sires whose progeny have performed consistently well, and who may be worthy of note…

We start with a chap for whom there will be no more foals – he died in 2013 – but who is proving himself a top producer with the likes of Le Mercurey, Frodon and Yala Enki flying his flag. What is quirky about Nickname, in the context of a piece like this, is that he was still racing over fences as recently as 2008, as a nine-year-old.

There are not too many nine-year-olds who retain their undercarriage in the NH sphere, still less who then go on to successful stallion careers. His first crop didn’t hit the track until 2014 and, sadly, he only has three crops from which to pass judgement. But already he can boast of some high class stock, many of them – Frodon and Bagad Bihoue especially – yet to reach the zenith of their ability. If they are anything like their old man, they’ll keep improving for a few years yet.

With a roll of honour including Vroum Vroum Mag, Taquin De Seuil, Vibrato Valtat and Vaniteux, readers may feel a tad cheated to find Voix Du Nord nominated as an ‘under the radar’ stallion. Like Nickname, he too passed away in 2013 at a time when, incredibly perhaps, his representatives had a solitary flag-bearer, this month’s BetVictor Gold Cup winner, Taquin De Seuil.

With most of his progeny currently of racing age, we still don’t know just how good a stallion Voix Du Nord could be. All the more disappointing that he’s lost to the game already.

We move into the land of the living, and the less well known, with our third stallion, Alberto Giacometti. By Sadler’s Wells out of a Shirley Heights mare, this fellow was bred to breed if he showed anything on the track and, inevitably, he did. Winner of the Group 1 Criterium de Saint-Cloud as a juvenile, he was a close third in the G1 Prix Lupin behind Dalakhani before an unsighted effort in Kris Kin’s Derby the following year.

His work was already done, however, as that two-year-old G1 score was achieved at a distance of ten furlongs and on heavy ground: that’s the sort of stamina gene that makes a National Hunt stallion!

Alberto’s most famous junior thus far is probably Une Artiste, winner of the 2012 Fred Winter (and ten other races) and, though he has yet to father a truly top class runner, his consistency earns him a slot in this quintet. Specifically, nine winners from thirteen offspring to race in Britain or Ireland since 2009 – nigh on 70% winners to runners – is a fine effort.

Trained by Guillaume Macaire to make the frame in Grade 1 hurdle company, Saint Des Saints has shown himself to be a top class stallion since hanging up his horseshoes. He’s comfortably the most commercial of this group, his €12,000 stud fee pretty high for a National Hunt sire. Despite that, or perhaps because of it, he’s racked up 577 runs from his offspring since the start of 2009, and 111 wins.

A winners to runners ratio of 60% across such a large pool of horses is impressive, too, and he might just be responsible for next year’s Gold Cup winner. Djakadam is that lad’s name, the best of the Saint Des Saints progeny to race outside of France, and probably overall.

I am a big fan of German sires. With a flat race programme geared towards stamina, and stringent qualification criteria before a horse can stand as a stallion, the Germans seem to be breeding, forgive me, a superior race in terms of National Hunt stock.

Malinas, second to Shirocco in the German Derby of 2004 (1m4f, heavy), is quietly making a name for himself in the sheds. Far from prolific in terms of runners in Britain/Ireland – he’s had just 16 individual runners here – he has nevertheless had a glut of runners in mainland Europe, especially France. That may soon be the case here, too, as he was the busiest British-based National Hunt stallion in 2013, covering 129 mares.

Across La Manche, the likes of Mater Matuta, Mali Borgia, and the very promising Brio Des Villerets head a posse of winners. Closer to home, his best known runners are Cheltenham Festival winner, Medinas; and seven-time winner, Black Thunder. But there is plenty of young Malinas blood coming through, including American, Baltazar D’Allier, and Prince D’Aubrelle.

The son of Lomitas has a phenomenal 81% winners to runners ratio. Oh, and geegeez.co.uk may have purchased a foal by this chap, out of a Listed bumper-winning mare… It will be a while before we know if he’s any good, but in the meantime those of us in the syndicate will continue to take a very keen interest in how Malinas fares… 🙂

As an aside, you can add sires to your Geegeez Tracker, like so: 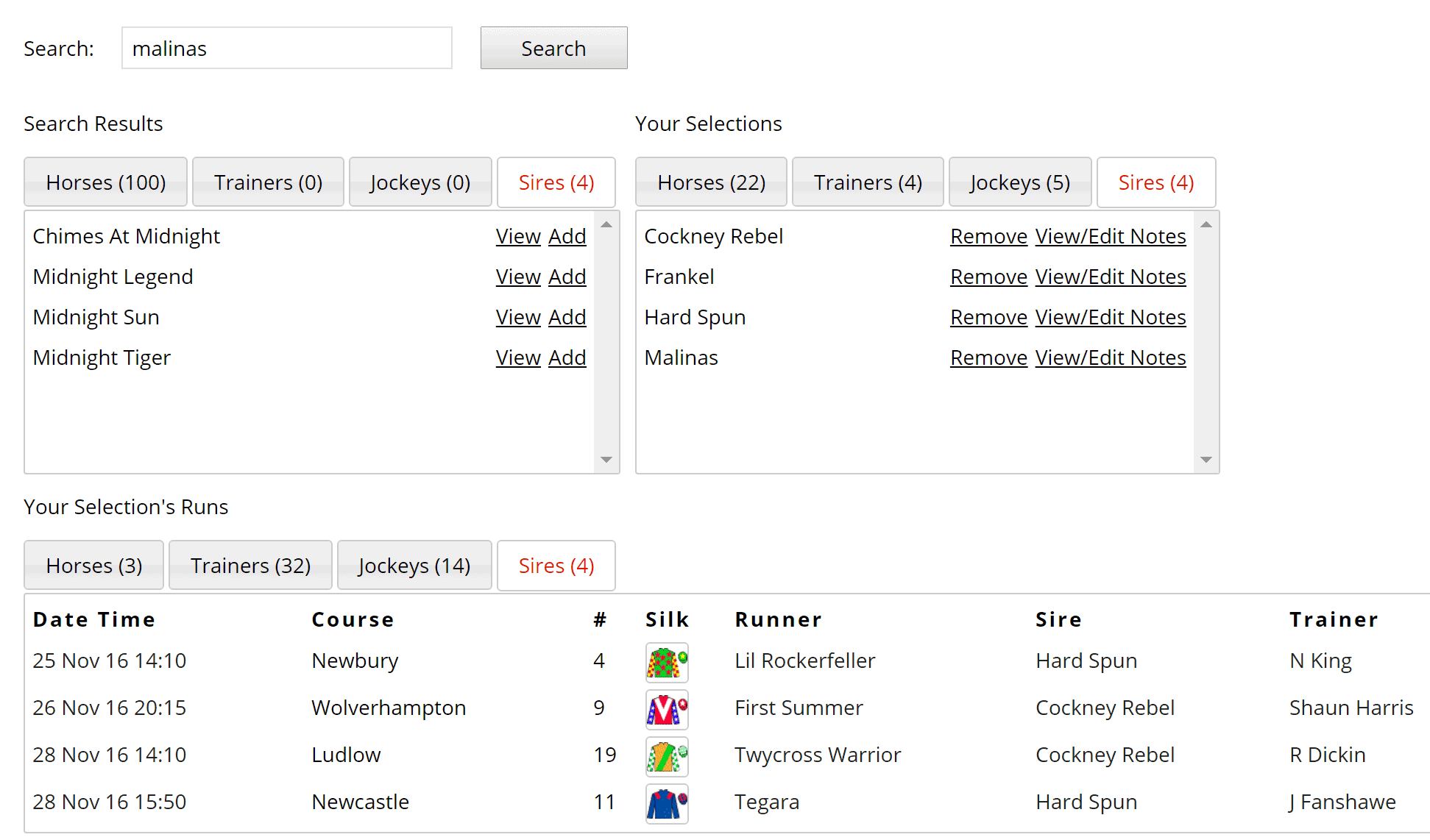 Track the progeny of your favourite sires using Geegeez Tracker

And, if you choose to receive Tracker sire notifications on your My Geegeez page, you’ll get an email like this each evening: 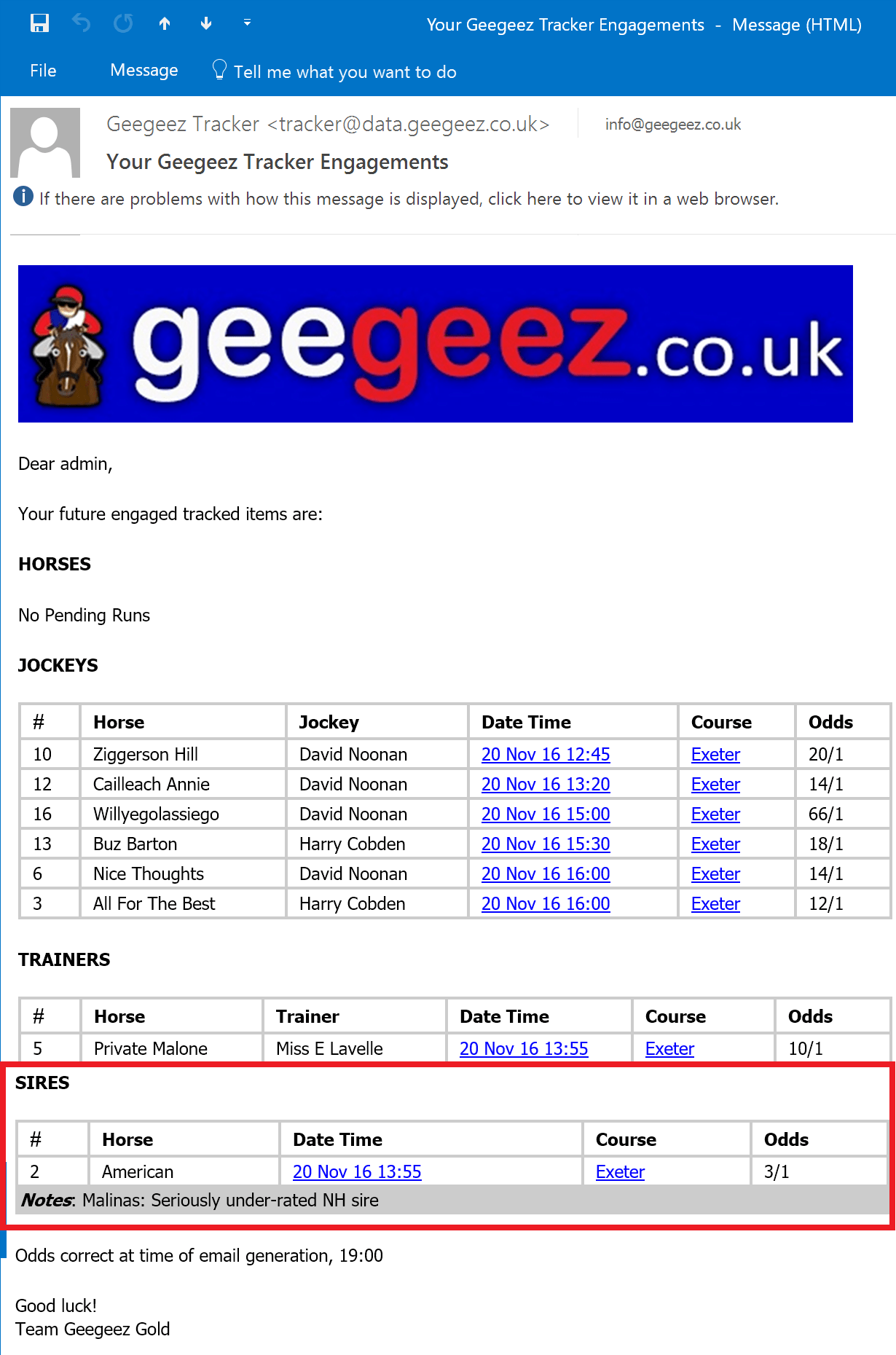 Get email notifications the night before your favourite sires have runners…

So those are my five sires to note, some less obvious than others. But what about you? Swerving the likes of King’s Theatre, Presenting, Midnight Legend and so on, who are the stallions whose progeny you look out for? Leave a comment below and share your knowledge of equine genealogy!