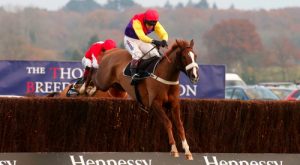 Do you like a multiple bet, say a Placepot, a Jackpot, or a single trainer combination wager? I was talking last Monday about Gordon Elliott and his rather high number of runners and having seen events at Navan yesterday, I think I’ve got a system, writes Tony Stafford.

If I’d played it yesterday, it would have yielded a profit of around 93 times my outlay, so, better late than never, here goes.

Take all Elliott’s horses – except where Willie Mullins has an odds-on novice chase newcomer certainty, as was the case with Min at Navan, and link all his other runners in a win accumulator. Wisely Gordon kept the opposition to Min to a min(imum), just a single 12-1 shot who finished seventh, but he won, as the system predicts, all the other six contests.

Admittedly, you needed to make a substantial stake, but as with the Jackpot attempts you and certainly I made in the old days, around 440 units is not out of the way.

That final number was arrived at helpfully with two singles and a two, while you would have needed five in the 30-runner opener (against another Mullins odds-on shot – thought he would beat that!), a four and just the 11 (yes ELEVEN!) to solve the featured Ladbrokes Troytown Chase.

Four of the six winners, from 16 and 25 overall, were owned by Gigginstown House Stud. I remember months before the recent exodus of Mr O’Leary’s hordes from Mullins, Gordon was interviewed about some new raw recruits joining his stable. The inference from him was that they were to be in a virtual holding phase before going to their eventual destinations. It seems they were already there, along with the new bunch arriving from Willie.

For all the polarised nature of Irish jump racing, there is still a macabre thrill when one of the big boys gets beaten (as long as you aren’t backing him), but increasingly in Elliott’s case it’s often Gordon beating himself. One of the triumphs of present-day commentators is the ability to identify the multiple caps worn by the same owners’ jockeys and for that Des Scahill deserves praise.

Elliott’s winners yesterday collected €152,000, and a good few more of them for the places, but that was less than the other man of the moment in jumping, Colin Tizzard, won for his owners with his Newbury treble on Saturday.

He had runners in six of the races, five singles and two in the last Hennessy Cognac Gold Cup – won in great style by the six-year-old Native River, who was backed down to 7-2 favouritism and given a brilliantly aggressive ride by Richard Johnson. His treble, which also included Thistlecrack, brought a collective £155,000.

At various times Native River looked likely to be overhauled by better-travelling, more conservatively-ridden rivals, but the combination of the horse’s constitution, the trainer’s brilliant stable form and the rider’s determination to win the race for the first time proved crucial.

It’s probably old age, but while sitting on one of the benches just outside the paddock, which face the weighing room, I noticed something about that jockey that had never previously caught my eye.

I do confess that had I not been watching a wonderful film featuring Eddie Redmayne and Michelle Williams, playing respectively Colin Clark (son of Lord Clark of Civilisation; brother of politician, Alan) and Marilyn Monroe, a couple of nights earlier, I definitely would not have been so inclined.

Young Colin, it seems, had a week-long dalliance with Marilyn when she came over to play in the film, The Prince and the Showgirl, alongside and under the direction of Sir Laurence Olivier. In one scene, the car in which they are leaving Pinewood Studios, passes some actors, among whom a famous British comedian of the 50’s and early 60’s comes briefly into view.

From that minute, the subconscious took over, and as the champion jumps jockey of last and this season entered my vision on Saturday, that clinched it. It’s …… ……!  Naturally I daren’t reveal who it was, and if anyone starts calling him ……, they’ll have me to answer to.

The sales are winding down to their annual conclusion with five days of mares starting today following four of foals and one of yearlings last week.

Believe it or believe it not, last year I happened to be at the sale when a friend and very experienced one-time racehorse owner who still plays at the odd house valuation, tagged along with me to the Juddmonte pavilion.

The owners of Frankel, Kingman and most memorably this autumn, Breeders’ Cup Classic hero Arrogate, always provide the highlight of the mares’ sale, their classy cast-offs providing smart pedigrees for smaller breeders around the world to augment their stock in many cases making foundation mares.

In all, 58 of their home-breds will go through the ring, withdrawals apart, so the Juddmonte hospitality will be at full swing. Their mares sell tomorrow and Thursday and to get to the refreshments, you need to pass through Someries Paddock, just behind the main sales restaurant.

There could be no better man to meet and greet the needy and greedy who gravitate to the tent than the genial Lord Teddy Grimthorpe. Nobody in racing spends more time smiling than Teddy, which is just as well for the almost-unemployed valuer friend of mine, whose days as an owner are long gone, but who has been salivating in anticipation since New Year’s Day..

Last year I think my man – like the model for Richard Johnson he must remain nameless – was fairly frugal in his consumption as he’s not a drinker, but the beef on the bone and several desserts found the way onto his plate. I think he plans a more serious assault this week.

It looks as though I’ll only make it there today, with a couple of longer trips elsewhere scheduled for later in the week. I hope Juddmonte mares sell for fortunes, and that everyone has a lovely time.