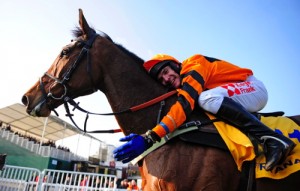 So I ate an extra mince pie rather than keep to the schedule, writes Tony Stafford. If apologies are in order, then sorry, but I’m sure you had something better to do rather than read about horseracing, at least my sometimes oblique slant on it. It was probably also that I knew I would be having a bit of a rant.

A few hours’ sleep would mellow me a little, I thought, but all night long, visions of something I hadn’t fully believed at the time, intruded on some fitful slumber. It’s all too easy to criticise a jockey – in the country’s 8,809 (March 2016) betting shops, people who watch every day will show you how with a vengeance – but I rarely notice, which suggests they (jockeys) might be generally competent.

But once in a while a ride is so out of kilter with the norm that even my customary lethargy is disturbed. Such a ride was perpetrated at Kempton Park on Boxing Day by Daryl Jacob, and I’m sure that after Might Bite’s last-fence fall when as the Racing Post reported, he was 18 lengths clear, trainer Nicky Henderson and owners The Knot Again Partnership will have been looking for an explanation of the latter portion of the ride.

Lining up for the two and a half mile Grade 1 Kauto Star Novice Chase, Might Bite was rightly one of the leading contenders, having won four of his eight career starts over three seasons and one of his two novice chases, for each of which he’d started 2-1 on favourite.

Firstly on chase debut at Newbury in November he was rallying under Nico de Boinville, his hitherto regular partner, when a blunder at the last fence resulted in a half-length defeat. Then earlier this month at Doncaster, with Jacob replacing the injured de Boinville, he made all, was left clear at the tenth, hit two out and then allowed to coast home.

Yesterday, once again Might Bite was ridden prominently, and after some initial skirmishes, went clear readily from the fourth-last fence. By the straight it seemed only a fall would prevent connections from collecting the £40,000 first prize. At the second-last he was well clear, whereupon Jacob had a look round at his toiling rivals, but unlike at Doncaster, for some reason he decided to go for broke.

He could hardly have detected danger from behind, but he proceeded to administer three strong left-hand blows with the whip and as they stretched ever further clear, kept riding vigorously and hurled him at the final obstacle. I must say I fully expected the outcome, a heavy fall, and there has been nothing since to convince me that a more measured performance from two out would have given the team a more than adequate winning margin.

Had he got over the last, he’d have won by an official “distance”. Instead it was left to Royal Vacation, at 33-1, to collect the trophy and the accolades for the seemingly-blessed Colin Tizzard stable. While Henderson was in the process of enduring a most un-Henderson-like Kempton Boxing Day – he had two minor winners elsewhere – Tizzard was enjoying the benefits of unworldly stable riches. As he said later, once Thistlecrack – yes I’ve finally got round to him – was aimed at the King George and a clash with Cue Card, then he was looking around for “something for the novice” and the solid, dependable and now top-flight winner Royal Vacation fitted the bill.

You’ll read plenty about Thistlecrack elsewhere, and his exemplary performance in just his fourth chase, beating Cue Card and a rallying Silviniaco Conti – unwilling to adhere to his unflattering 20-1 odds – with great authority.

So he’s a general 5-4 shot for the Cheltenham Gold Cup with the likelihood of a second novice winner of the race in three runnings after a 41-year gap between Captain Christy, whose victory I’ve just reprised on the internet, remembering my winning bet, and Coneygree last year, who had previously run over fences only three times.

In that regard Thistlecrack will have an experience edge on his predecessor, and will also, at nine next week, be a year older than the Bradstock family horse was when he won the Gold Cup. Coneygree missed Kempton, having chased home Cue Card at Haydock last month, but could well be in attendance at Prestbury Park in March having missed the race in 2016.

There might not seem, at first sight, to be too many similarities in the breeding of these two outstanding stayers. Coneygree, winner of nine of his 12 career starts, is by the multiple Group 3 winning miler/10 furlong performer Karinga Bay. John Oaksey, looking for a mate for Coneygree’s mother Plaid Maid settled on Karinga Bay because he was a son of the Noble Lord’s favourite horse, Ardross.

By contrast, Thistlecrack is a son of Kayf Tara, twice winner of both the Gold Cup at Ascot and the Irish St Leger and the perennial champion jumps stallion based in the UK. He is now 22 and will stand for a private fee at Overbury Stud next year.

But then the plot thickens. Ardross, also a dual Gold Cup winner, appears in Thistlecrack’s pedigree, as the maternal grand sire and father of the Tizzard champion’s dam, Ardstown. So they both have pedigrees packed with stamina. If anything, Thistlecrack carries a double dose of staying power and with 13 wins in 18 starts so far, it looks as though he’s just getting going.

For his first ten outings, he was beaten, then won, five times in a row, explaining perhaps why in his eighth start, in the long distance novice hurdle at Aintree in April last year, he started 25-1. The margin of success might have been less than the eventual 13 lengths had the weakening Alpha Des Obeaux not fallen late on. Beaten next time in Ireland, he has since won nine in a row in his last 19 months’ action.

It is interesting to delve further into the respective abilities of the two broodmares. Both raced over fences – Ardstown exclusively, collecting three pointing wins for the Knipes, who bred Thistlecrack, and four over fences from 23 career starts.

Plaid Maid won once over hurdles, and like her counterpart, four times over fences under rules in 19 career outings. She was a year younger than Ardstown, and eerily the pair met on the racecourse at Newbury on March 24 2001 in a decent 12-runner field which also included the former Champion Hurdler, Collier Bay.

The then 10-year-old Ardstown had been confined to hunter chases in both 2000 and the early part of 2001, but trainer Venetia Williams, considering the lightly-made mare unsuited hefting big weights, found her a suitable race over the three-mile trip. She was 4lb wrong in the weights, meaning her official 107 rating was swollen to 111 for the race.

Plaid Maid was conceding 7lb and at the finish Ardstown and Norman Williamson had a six-length margin over her and A P McCoy. That equates to an almost identical level of ability for the pair. Ardstown never won again, whereas Plaid Maid had one more payday next time out, before they both went on to their real purpose in life – producing jump racing legends.