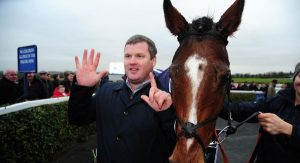 Gordon Elliott was interviewed on AtTheRaces recently and in the midst of his conversation with Gary O’Brien the topic of the possibility of his winning the Irish Trainers Championship came up, writes Tony Keenan. ‘Absolutely no chance’ was his answer, a political response no doubt, and one that plenty of our politicians with their limited understanding of probability would be proud of.

The betting markets say otherwise with Elliott an 11/10 shot and Willie Mullins at 4/6, and the pretender surely knows them – or at least has people around him who can tell him. Taking out the over-round, those odds express the view that Mullins has a 56% chance of retaining his title while Elliott has a 44% of winning a first one.

Let’s consider where the respective trainers are in the current season. As of Tuesday, January 24th, Elliott has €2,857,825 in prize-money while Mullins has €2,543,063. Henry De Bromhead is also having a big season and will shatter his previous highs in prize money and winners but for the moment we are concerned with the big two. It’s worth considering what has been needed to win the title in the last few years and how both Mullins and Elliott have done in those campaigns.

Elliott has been runner-up in each to the last four seasons though his challenge never got closer than the €1,920,355 he was behind last time; it was hardly a meaningful competition with the result a foregone conclusion. But already he has surpassed his 2015/16 figure which has in turn taken some available prize-money away from Mullins; the lofty €4 million figures Mullins won the in the past two seasons may not now be necessary to claim the prize.

Both trainers have their respective strengths and weaknesses, races they do well in and races they struggle in, though struggle is a relative term when you are talking about this level of domination.

The sheer scope of the Elliott operation is what stands out; he has had more than double the number of runners that Mullins has had. What is perhaps more amazing is the number of individual horses he has run, 235 and counting as I write. Even in the midst of the Mullins hegemony in the past five years, he never had more than 195 individual runners in a season (that came in 2013/14) while there is a distinct possibility that Elliott goes over 300 for the campaign, a previously unthinkable figure.

One area where Mullins has been notably quiet this season has been handicaps and while he won two feature races at Galway with Clondaw Warrior and Westerner Lady in the summer, his last handicap winner came on the 17th of October at Roscommon with Dreambaby. It’s not so much a case that Mullins has been doing badly in handicaps – his strikerate of 16.7% is well ahead of Elliott’s 9.6% – but rather that he hasn’t been trying particularly hard.

For instance, he took potentially well-treated novices like Haymount and Bellow Mome out of Sunday’s Leopardstown Chase at the five-day stage, a race which Elliott won with a similar type in A Toi Phil. His method of training – his horses are aimed at winning maidens and going on from there – is hardly conducive to landing handicaps and while he will likely run such horses in handicap company as the season goes on, particularly at Punchestown, there is a chance that the bird will have flown. Elliott, of course, is having an A-plus season in valuable handicap chases, winning the Galway Plate, the Kerry and Munster Nationals, the Troytown, Paddy Power, and Dan Moore along with the Leopardstown Chase.

How Mullins responds to the Elliott challenge will be interesting. Will he adapt, or stick to proven methods? Adapting is not as easy as it seems with many trainers over the years trying and failing to change what they are good at, but then Mullins is not your typical trainer. It’s actually less interesting to consider what Elliott will do as the answer seems simple: he will run his horses out, again and again, as he has done throughout his career.

Certainly when it comes to races at the end of the season, he seems the one that is more likely to engage in pot-hunting, giving a horse an extra run that it otherwise may not have had, though Mullins did do some of that last year when trying to win the UK trainers’ championship.

Another area where Mullins has pulled back markedly is with his runners this season in the UK. In fact, Un De Sceaux in the Tingle Creek was his sole runner. That’s a big shift from the last two seasons as you can see below.

I’ve included both the Mullins and Elliott runners in each campaign from the start of the season through to the end of January. Elliott’s numbers have continued to rise whereas Mullins’s have fallen off a cliff – apparently the owner wanted Vroum Vroum Mag to run at Kempton on December 26th but was overruled – though the former’s may need a little context as he is inclined to have runners at the UK gaff tracks that would struggle to win in Ireland. That said, the likes of Apple’s Jade, Balthazar D’Allier and Ucello Conti ran in the UK before the turn of the year.

Mullins and Elliott – UK Raiders by Season (to end of January)

This places Cheltenham in a really unusual spot in 2017. It could be a case that a big Cheltenham for one of the pair proves detrimental to their chances of winning at home and it’s rather like the football fan that has to choose between winning a Premier League and a European Cup. Sensible arguments can be made for both though Elliott having won a Gold Cup but not a trainers’ championship might be worth considering.

We’ve been told that Mullins has filled all the boxes that were left empty by the Gigginstown departures but he won’t have replaced like with like; the new inmates will have been younger horses that generally don’t compete in the really valuable races as they take time to mature out of bumpers and novice races. The loss of a horse like Vautour would be tough on any yard but where Mullins had reinforcements previously there is not quite the depth among the experienced horses now.

Elliott on the other hand got a number of ‘ready-made’ horses from Mullins (amongst other trainers) and he has done well with Apple’s Jade, Outlander and Don Poli. Also, Elliott was quite shrewd in some of his purchases in the horses-in-training sales. He acquired Mick Jazz (£27,000), Ned Stark (£70,000), Turn Over Sivola (£15,000) and Rightdownthemiddle (£35,000) before the season proper and they’re horses with the sort of lofty marks that get them into the valuable races; they won’t all turn out well but it would hardly be shocking if one landed a big prize this season and that could be the winning and losing of the championship.

Those big prizes will be the key to deciding the prize. As of Tuesday January 24th there is a little over €10 million of prizemoney remaining in the season and the breakdown by race type follows. It’s best to consider the ‘big 25’ as there are 25 such races left that are worth at least €100,000.

They comprise the Irish Champion Hurdle and Gold Cup at Leopardstown, the two Grade 1s at Fairyhouse, all the Grade 1s at Punchestown and seven handicaps, two over hurdles and five over fences. All but one of those handicap chases are over trips of three miles plus with the Irish National the jewel in a crown with a massive prize fund of €500,000. It has been Elliott who has dominated these races all season – though neither has won an Irish National as yet – Bless The Wings going close for Elliott last year.

As this stage, I find making a prediction on the outcome of this race impossible. I’ve vacillated on it all season; when the Gigginstown horses initially left Mullins I thought it was great for Elliott but would hardly signal the end of the Mullins domination. Then there was Elliott’s six-timer on Troytown day which swung things in his favour before Mullins went on the rampage over Christmas.

In January however, he has cooled off again as Elliott has won big handicap chases on back-to-back weekends. Compared with the uncompetitive seasons we’ve had recently, it’s been fascinating viewing and one that could well go down to the last day of Punchestown.

Sit back and enjoy!