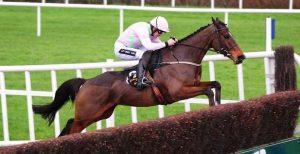 As we get within a month or so of Cheltenham, the familiar forces are gathering, writes Tony Stafford. Over here the Nicholls and Henderson pulses quicken as expeditionary representatives travel far and wide to put down markers. In Ireland, the 1-14 shots that are Douvan and the rest toddle around to collect the odd €20k prize without breaking sweat on the way to Festival glory next month.

We’ve seen most of it before, so when something totally out of kilter with the norm confronts our vision, it is all the more enjoyable.

In Ireland, jumping especially is mostly about the Mullinses and the Walshes, leavened with increasing vigour by Gordon Elliott. All of the above were typically among the winners at Punchestown yesterday.

The scale of Willie Mullins’ and Elliott’s stable power must constantly frustrate would-be challengers for the major prizes, so when one of the lesser lights beats them at their own game, the satisfaction must be all the greater.

That sort of pleasure was clearly evident in the body language between rider Katy Walsh and trainer Ross O’Sullivan after Ruby’s sister made all with an enterprising and powerful ride aboard Baie Des Iles in the three and a half mile Grand National Trial. I would go so far as to say I reckon it was one of the best front-running rides I’ve ever seen in a long-distance chase, given depth of opposition and testing ground conditions.

The historical fact is that O’Sullivan, who happens to be Katy’s husband, was winning his third race of the season. His French-bred six-year-old mare is already building up a decent record, this being a second Irish victory following a Punchestown three-miler last season before a good second behind Bonny Kate in this event a year ago.

Ruby Walsh rode her that time, but yesterday was required for Sambremont, trained by Willie. That gelding stayed on late to pass Bonny Kate for second close home, but for almost the entire trip, Baie Des Iles, jumping boldly and accurately, led a nice few lengths clear of her old rival, with the remainder of the 15 runners, all geldings, miles behind.

This though was at the other end of the stamina spectrum and considering Baie Des Iles’ relative youth, the fact she stays so well explains the trainer’s relish for a challenge for Newcastle’s four-mile Eider Chase next month. She’s already been sixth to Rogue Trader in the Irish Grand National and fifth behind Gold Cup candidate Native River in the Welsh Grand National, in each case as the only five-year-old in either race.

Yesterday’s win will have earned the daughter of Barastraight – unfashionable in France where he stands – a hike towards the 150 mark, but seemingly the prospect of soft ground on the tough Newcastle track offers the potential of perfect components for Baie Des Iles and her determined ally in the saddle.

I often get a reminder of the Eider Chase and two or three other now otherwise fading memories of an old former Daily Telegraph colleague, especially when, as on Friday, I see Grand National-winning jockey Graham Thorner at the sales, where he has become a bit of an ace in picking up unexposed hitherto under-achievers from the big yards.

He regularly turns £2k ugly ducklings into nice jumping prospects, but there’s always time for a reminder, as on Friday, of the day at Kempton when he rode a winner for Noel Blunt’s father-in-law. My Mate won by 25 lengths and the next day, recounting the tale, Blunty added proudly that of course he had given the jockey, who’d become a bit of a pal to him and his wife, a present. “Yes,” said Noel, “I gave him two quid!” I don’t think Thorner ever declared it to the tax people.

Noel eventually went on to the Sporting Life as chief sub-editor and there enjoyed cult status with such headlines as “Scaling the Eider” and “The Hanging Baskets of Babylon” actually appearing in the paper. Even before he so helpfully engineered my recruitment to the DT when a racing desk member died suddenly, the funniest of all was the Kruggerand episode when John Oaksey mentioned the gold South African coins in his Sunday article. Scratching of heads all round, until Noel had a brainwave. “Ask Tony <I was doing minor sports results on the next desk>. “He knows Latin!” Still miss you mate.

This is the time of year that my week quickens with young horses getting going on the gallops and mares preparing to foal. Ray Tooth has one on the board already from Lawyers Choice who has a nice big colt by Garswood, whose foals made up to £75k despite his modest initial stud fee of around £6,000 (£4,000 this year).

Garswood, of course, is a Group 1 winning son of Dutch Art, who produced two nice winners from Lawyers Choice – Dutch Art Dealer and Dutch Law, the latter who did so well for us last year. Their brother, Highway Robber, is the likely favourite for a race at Newcastle tomorrow.

His trainer, Wilf Storey, won with Table Manners on the same track on Saturday night, so she became the third dual winner for her dam, Nine Red, who is about to produce to consistent Yorkshire-based sire, Monsieur Bond.

As Tattersalls’ newly expanded two-day sale showed, demand for British and Irish bloodstock remains high, and Ray’s policy of producing his own horses rather than pay what’s needed at auction with so much high-powered overseas investment has to be our way forward.

To that end, I got to see a nicely-made son of Equiano out of flying filly Catfish, who we still maintain might have carried the accolade “the world’s fastest racehorse” had her saddle not slipped at the start of her Vodafone Dash attempt at Epsom a few years back. She finished third behind the John Best-trained Stone of Folca in the fastest electronically timed five furlongs, so, mated with a fast stallion, could well produce a decent juvenile. Chris Wall likes what he’s seen of him so far.

In all there are eight juveniles (seven home-bred) going into training and no doubt I’ll be boring you with all the minor excitements as their training regimes proceed. After all, Flat racing on turf returns next month. What happened to the winter? We didn’t get one, just daily Festival updates from November onwards.