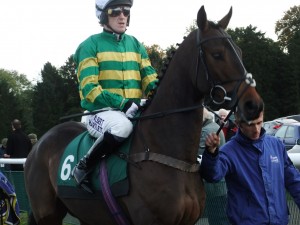 Funnily enough, I never really fancied seeing “Being AP”, the documentary film about the period leading up to the 2015 retirement of Sir Anthony McCoy, which had its limited cinema opening and DVD release later that year, but was screened late last night on BBC2, writes Tony Stafford.

It was rather inconveniently placed if you were caught up with the competing snooker final on Eurosport which ended halfway through the McCoy film, but I compromised and saw the bulk of what proved compelling watching.

We knew for many years all about the almost manic drive which characterised 20 consecutive jump jockey championships, but saw here first-hand his total unwillingness to allow such trifles as injury to prevent it happening for the final time.

The domestic trappings of success and his high-level income as J P McManus’ retained jockey were evident as he forced himself through the various periods of rehabilitation onto yet another 200-plus seasonal tally.

This was the season (2014-15) of his fastest ever first 50 winners, designed, as he graphically says: “to sicken everyone else” and make them see the inevitability of the eventual outcome.

But McCoy admits to a glass half-empty mentality. Dave Roberts, his equally-driven agent, who slipped out of the shadows for a rare public appearance throughout the piece, tells him that it will be impossible for anyone to match his 4,000 winners.

“To get 2,000”, says Roberts, “Someone will need to get 100 winners for 20 years.” McCoy has doubled that, yet his slant on that is “yes, I have had more winners than anyone else, but more losers and more falls.” Always, for Sir Anthony, it has been a case of fearing not becoming champion. In this final season, the early dominance led to hopes of a first-ever 300-winner campaign, but when injury ruled that out, the eventual decision was to announce imminent retirement on reaching 200, as he did on Mr Mole on February 7 2015 at Newbury.

Roberts was on hand to escort him back to the paddock, presumably to make sure he would stick by the planned announcement, and sure enough, as Rishi Persad moved in, microphone pushed into the rider’s face for the first interview, remarking on “yet another 200”, AP said: “That’s the last one, I’m retiring at the end of the season”.

For once the press corps was stunned. It was a big enough event – Betfair Hurdle Day – for the bulk of the media to be on hand, and the news was self-perpetuating, with wife Chanelle later fielding umpteen messages from friends as the couple drove home.

Clearly, Lady McCoy has had a serious challenge to compete with her husband’s riding and admitted selfishness – you have to be selfish as a sportsman, he maintains – but she has come through as an equally strong character.

Many of the nicest images are the way in which she supported him as he rode in races. “Come on Honey” was the usual exhortation from the missus as she watched races like the last Grand National on fourth-placed Shutthefrontdoor. On the day he received his 20th championship title at Sandown, she had both their children with her. In the midst of great emotion all around, the lasting image for me was her ginger-haired infant son Archie oblivious to it all in his mother’s arms, nonchalantly munching endless soft sweets.

Naturally JP McManus and Jonjo O’Neill were equal participants in this unique story and I expect they both approved of the outcome of what could have ended up an embarrassing sequence of wins and self-satisfaction. Sir Anthony McCoy’s character meant that could never be the case, and indeed the fact he was so worried about what retirement would mean for him also proves he does have some human frailties.

There were plenty of JP stars around over the weekend, with Yanworth not exactly stressing his almost-favourite status for the Champion Hurdle with a narrow win in Wincanton’s Kingwell Hurdle, but eight years ago Punjabi failed to win that race before beating Celestial Halo and McCoy on Binocular at Cheltenham.

Maybe more worrying for the owner was Jezki’s odds-on defeat by Tombstone at Gowran Park, the latter horse overturning previous form between the pair. Still, Forthefonofit, Dream Berry and Sutton Place, the last-named in a Grade 2 at Navan, kept the green and yellow colours to the fore. Maybe Jezki should try the three miles of the Sun Bets Stayers’ (ex-World) Hurdle, worth a highly acceptable £170,000 to the winner this year.

At nine, Jezki still retains most of his ability, but until Saturday, Zarkandar, another probable for the Stayers’ race, was looking an habitual non-winner, having gone almost four years since his last triumph in the UK. Paul Nicholls’ 10-year-old did win a French Grade 1, easily beating the talented if enigmatic Gemix at Auteuil more than two years ago, but his Haydock win on Saturday offers hope for one more big Festival effort. Winner of the 2011 Triumph Hurdle, Zarkandar appeared at the fixture for the next four years but was absent in 2016.

It must be hard for a smaller trainer to eschew running a decent horse at Cheltenham, but Tom Symonds, 32 today, who escorted Punjabi back to the winner’s enclosure in 2009 when joint assistant trainer at Nicky Henderson’s with Ben Pauling, will not be sending Don Bersy there.

The French-bred, another notable find for Claude Charlet and his France-based ally Joffret Huet, made it three wins in a row for Tom when collecting the Victor Ludorum at Haydock, giving 8lb to the runner-up.

“We didn’t enter him for the Triuimph, and he won’t go to the Fred Winter. We might look at Liverpool,” said Symonds, as ever under the radar. This observer hopes he will break into the next level and owners Sir Peter and Lady Gibbins, who also own the smart pair Hollywoodien and Kaki de la Pree, can help him with that ambition.

On a weekend of some successful and some less-so old-timers, the best performance by far was Cue Card’s 16th win in 35 career starts in the £85,000 to the winner Betfair Ascot Chase. The 2010 Cheltenham Bumper winner and Ryanair Chase victor four years later, it’s hard to see why he shouldn’t go close in a race he might have won a year ago bar a late fall. I trust Michael O’Leary is not too fussed that after his Kempton King George defeat by Thistlecrack, handicapper Phil Smith chose to drop Cue Card  from 176 to 170 before Saturday’s tour de force!