The ground is heavy at Ffos Las today, and this is a two mile six furlong handicap hurdle for horses rated 0-100.

Filatore is the outsider of the field at 14/1, however he is the highest rated on the Speed Ratings, with a mark of 101. He has fallen a long way down the handicap over the last six months and is now on a very attractive mark, however it remains to be seen whether he has the fight left in him to win a race like this. He has been very consistent on heavy ground in the past, so perhaps a return to a shorter trip on heavy going can bring the best out of him.

Fille Des Champs is the top weight and she looks comfortably the best on the Instant Expert tab. She has three sections of green, including being only one of two runners in the race to have won on heavy going. She is three pounds higher than for her last victory, but this looks well within her capabilities.

Kapricorne is the only other runner here with a green section, having won two out of his six races here at Ffos Las.

There are no green ‘blobs’ on the Pace report, but there are three of amber, and prominent runners have the best record here over this distance. They have a strike rate of 16.55% for a small level stakes loss, from 139 runners.

Follow the tracks is normally at the head of affairs and has easily the highest pace score. The ‘Pace Prediction’ is Probable Loner Speed, and it will be Follow The Tracks that is most likely to be in front early on. 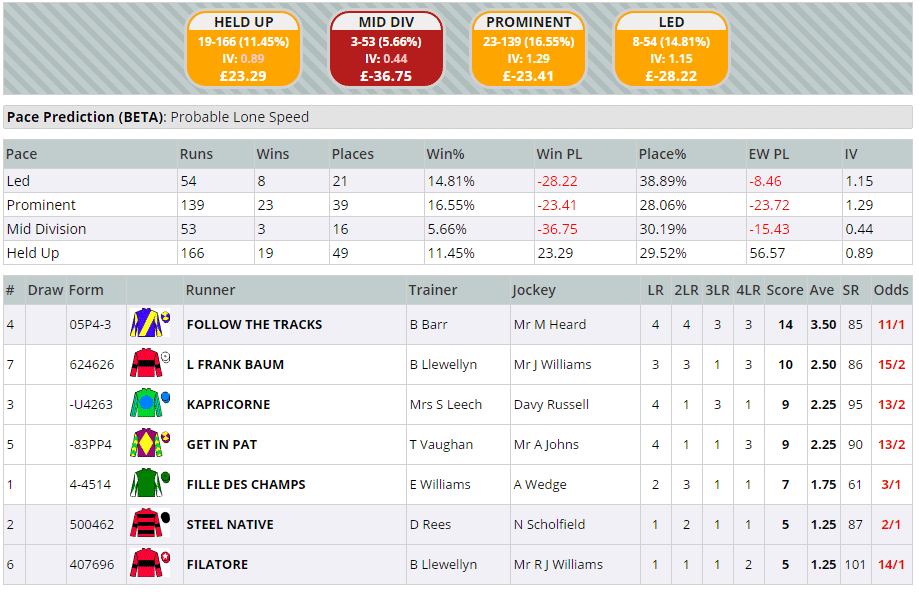 Trainer Statistics is the report that is free to all users on a Wednesday, and it shows us that over the past five years David Rees has a very impressive record here at Ffos Las. He’s had 12 winners (12.20%) and 23 places (23.96%) for level stakes profits of 69.50 and 55.24 respectively. Steel Native is his runner here today and he looks to be in with a shout.

Stat of the Day, 1st March 2017 A bit like Groundhog Day…
Scroll to top