One of Thursday’s Cheltenham Festival highlights, the Stayers’ Hurdle, has a lop-sided look to it, at first glance at least. Reverting to its traditional nomenclature after a spell in the World Hurdle wilderness, the Stayers’ is the rightful championship test of the three mile hurdling division. Multiple winners abound with the likes of Baracouda, Inglis Drever, and the peerless Big Buck’s accruing nine trophies between them since 2002.

Last year was Thistlecrack’s but his graduation to the chasing ranks, and unfortunate subsequent injury, means it will be left to 2015 champ, Cole Harden, to bid to uphold the trend for repeat victories.

Aside from the repeat factor, what other reliable trends are there to assist in whittling what could be a fair field numerically?

Although five-year-olds are 0 from 18 since 1997 (20 years, 19 renewals – abandoned in 2001), they have taken out six podium finishes in that time. Should either of Footpad or Apple’s Jade land here, it won’t be age that gets them beaten.

At the opposite end of the maturity scale, horses aged in double digits are 0 from 28, with just four places to their collective names. That’s not the best news if you like Clondaw Warrior or Zarkandar.

And nine-year-olds bear closer scrutiny, too. Although, on the face of it, three winners from 32 runners is respectable, it may be noteworthy that the trio included Inglis Drever and Big Buck’s, winning for the third and fourth time respectively. The sole, or should I say sol, other nine-year-old winner was Solwhit in 2013.

Seven- and eight-year-olds win largely in line with numerical representation, but six-year-olds have done well. Of the 55 to rock up here since 1997, six have won and twenty placed. That’s 32% of the winners and 35% of the placed horses, from just 22% of the runners. That ought to cheer fans of Lil Rockerfeller, Whiteout and Agrapart should any of them confirm their attendance.

You simply have to have run well last time out, according to the evidence of the past two decades. Of the 67 horses (28%) to have finished outside the top four on their prior start, none won and just two (3.5%) placed.

Winners the last day accounted for 58% of the champions and the exact same percentage of Stayers’ Hurdle placed finishes, from just 31.5% of the runners. And those who finished second last time out slightly outperformed the representation (26% winners, 28% places, from 23% runners), yielding a small profit at SP (+7.25).

The key thing here is that those to have run poorly last time have very little chance of turning it around on the big day. Although this is neither’s first choice engagement, Nichols Canyon and More Of That both failed to complete last time.

90% of Stayers’ Hurdle runners last raced between 16 and 90 days ago. That includes all 19 winners since 1997, and 56 of the 57 placed horses. Only Wicklow Brave falls outside the range this term.

An optimally rested – one to three months – runner looks a positive.

From a historical perspective, then, one might look for a horse aged six to nine, which ran first or second last time and has been rested between one and three months. That brings in most of the top of the market and, thus, is of little utility. And it’s an hour of my life I won’t get back!

Poor Helen Nelmes. She’s not had a winner since 24th June 2014, and now this. The Dorset handler, who was responsible for taking Unowhatimeanharry up to a mark of 127 through his first 13 starts has had to watch, with a curious mixture of pride and embarrassment no doubt, as Harry Fry has won eight races on the trot with her former inmate. It’s enough to make you give the game up.

Fry acquired ‘harry as a seven-year-old so it’s difficult even to suggest the horse was too immature to step forward under his previous trainer’s tutelage. In any case, let’s not be overly harsh and, instead, judge the 5/4 favourite on his merits for the race.

Eight straight wins is a good start. During that time, he’s risen through the ranks of racing club handicapper to JP McManus-owned Grade 1 beast. (It is to be hoped that Mrs Nelmes agreed a sell-on clause). That progressive sequence includes four wins at Cheltenham, one of them in the Festival, in last year’s Albert Bartlett.

But here’s a thing: the five Albert Bartlett winners to contest the Stayers’ Hurdle have all been beaten. Of course, it is unfair to visit the iniquity of the potato race fathers onto its sons, to butcher the Good Book, and we should judge ‘harry on the totality of his recent form. That suggests he’s moved forward considerably since his spuds triumph, wrapping an arm around the Long Distance, Long Walk and Cleeve Hurdles since.

It is very hard to see any horse that Unowhatimeanharry has beaten this season reversing form. Ballyoptic got to within six lengths on soft ground, but has fallen and been beaten ten lengths by him since. Moreover, he looks a clumsy jumper and may prefer soft ground. Certainly not for me, thank you.

Cole Harden ran well in defeat in the Cleeve, where he’d have hated the ground, and he may have had his nth wind op since (more unsporting conjecture in a preview littered with such uncharacteristic bitch swipes). But he was no closer than 31 lengths to the Thistlecracker in last year’s renewal, and an abandoned chasing campaign leaves this fellow in no man’s land. He may be capable of making the frame if the ground dries out and if he can control the early fractions, but he’s not especially appealing at 9/1, nor even in the ‘without’ market at 5/1.

The likes of Un Temps Pour Tout, Zarkandar and, to a lesser extent, Lil Rockerfeller (if he can overcome a recent setback), have been put firmly in their places, so it may be that the opposition route into the race is via Ireland.

The first thing to say is that the Irish have a moderate record in the Stayers’ Hurdle. Solwhit in 2013 was the first Irish winner since the much-loved Dorans Pride in 1995, though they average only around three runners per season. With that in mind, then, we need to be looking for a genuinely smart horse from across the Irish Sea if we’re to entertain the notion of the raiding party adding to their sparse pickings in recent times.

Shaneshill is a consistent type, but he’s been consistently beaten – just three wins in a twelve race hurdling career – and may never break through the 160 barrier ratings-wise. Vroum Vroum Mag‘s cloak of invincibility has been somewhat trodden upon this season, first by a short head defeat to Apple’s Jade – that one subsequently outpointed by Limini – and most recently with a labour-intensive narrow verdict over a 140 horse.

It might be fair to say that she’s not been herself, but if that’s the case it becomes a leap of faith that she has returned to herself in time for this. Even if she has, she’s pegged around 155, though the mares’ seven pound allowance would move her to the low 160’s. That would certainly make her competitive but she’s no better than 7/1 with those wellbeing reservations still to quash.

I don’t expect either of Yanworth or Nichols Canyon to run in this, but if the former did show, he’d be very interesting. In the same ownership as Unowhatimeanharry, however, probably requires that one to bypass the race in order for Yanworth to secure his ticket.

A third horse in the same ownership, and a likely runner, is Jezki. Jessica Harrington’s nine-year-old has had injury problems in recent seasons, but he’s a class animal on his day. Indeed, he has eight Grade 1 victories to his name. That’s no hollow palmarès either: he was the Champion Hurdler in 2014, and went on to beat a near-peak Hurricane Fly again at Punchestown next time; he won the 2m4f Aintree Hurdle in 2015, by 13 lengths from Rock On Ruby; and he won the 2015 Punchestown World Series Hurdle over three miles.

Not seen for almost two years after that, Jezki reappeared in January to comfortably account for 149-rated Renneti, albeit in receipt of six pounds. On his only subsequent outing, he was second to Tombstone in the Red Mills Hurdle, over two miles on heavy ground. Those conditions are very different to three miles on top of the ground at Cheltenham, and there’s no doubt Mrs Harrington will have left a bit to work on in the intervening four weeks.

The reality is that it is a bit of a leap of faith with Jezki. Is he as good as he was? He was a legitimate card-carrying member of the 169 club over two miles. With a record on good to soft or quicker of 18111141 and at two and a half miles and beyond of 111, he’s surely the wrong price at 10/1 in a place.

Now, true, he could have regressed since his injury, and true, his form in two runs this year is no better than 150ish. But there are reasons to believe he can, and will, step forward from those prep races. The Irish handicapper reacted to Jezki’s defeat at the hooves of Tombstone by dropping him seven pounds to 160. That would still give him solid claims.

Two more Irish contenders are Clondaw Warrior and Snow Falcon. Of the pair, I marginally prefer the latter, but he’s found it hard enough to win over hurdles. Meanwhile, back ‘home’, Camping Ground produced an extraordinary performance in running away with the National Spirit Hurdle at Fontwell in a fast time. Gary Moore’s inheritance from the (presumed) unfortunate Robert Walford looks absolutely tailor-made for the Aintree Hurdle over 2m4f and was getting to the end of his rope at Fonters. 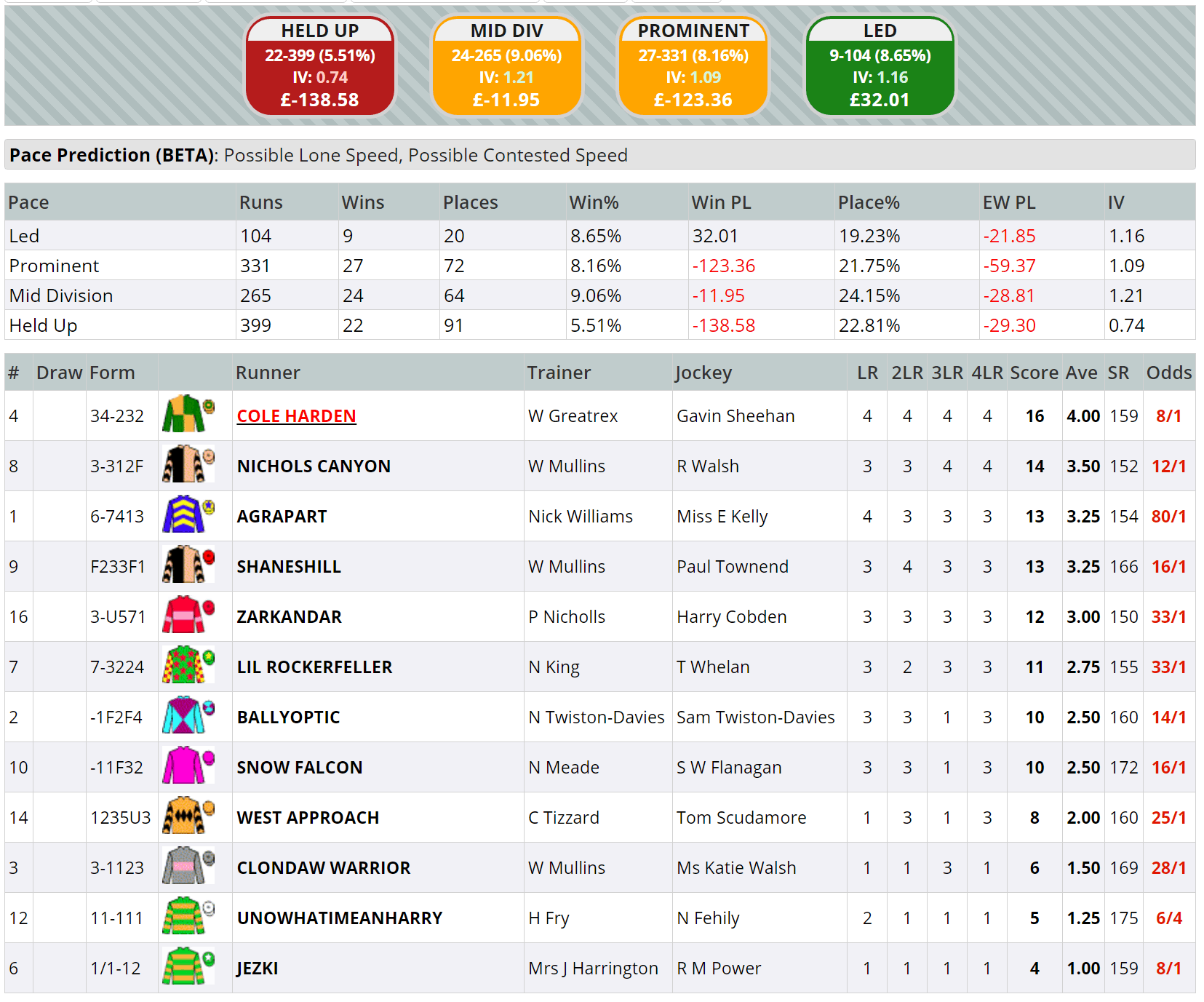 You don’t need to be Einstein, or even Pittsburgh Phil, to know that Unowhatimeanharry is a cast-iron favourite. But there remains a niggling doubt that he’s lorded it over a shallow domestic division this season. If that is correct, there may be merit in taking a chance on an unrelated formline: that of JEZKI.

Jessica Harrington’s nine-year-old has more class than any runner in the field, and on 2015 form would, I think, be favourite. The fact that he’s as big as 10/1 tells plenty about the size of the leap we’re making but, on a sound surface, I can see him running a blinder. He’s proven on the track, has the mix of speed and stamina required for this challenge and, I suspect, will be roughly half his current odds on the day.

But I do fear ‘harry. So, rather than back Jezki each way, let’s also take him in the ‘without the favourite’ market. He’s a top priced 4/1 there, because the 10/1 ‘all in’ book (Hills) doesn’t have a ‘without’ book; so you could take the risk and wait for more firms to price up ‘without’. I’ll take what’s there now, and see how we go next Thursday.