“The Flat is back!”, they’re hollering. And so it is. This weekend sees the first UK flat turf meeting of 2017 – Ireland having already kicked on last weekend – at Doncaster, and features the Lincoln Handicap amongst its prize puzzles.

For punters, though, the early weeks of a new season can be a minefield: horses returning off lengthy layoffs, surface switchers from all weather (or National Hunt) to flat turf, trainers tentatively (and metaphorically) emerging from their hibernal slumbers…

Form in the traditional sense may reasonably be expected to be superseded at such times by a racecourse demonstration that the yard is ‘forward’ enough to do itself justice. Let’s just ponder that momentarily: horses don’t work in isolation, they do so as a team, in lots. Thus, while there will always be those that take more or less getting ready, the general fitness of a trainer’s herd can be judged by those to have recently run.

I have used that fairly logical premise as the backbone of a little system for taking on the early part of the flat turf season. It focuses exclusively on UK flat turf races in March (none this year) and April, and has a couple of rules relating to the horse, a couple of related lines on the trainer, and one regarding freshness – or lack of, as we’ll see.

First, then, the horse. It is often said that fillies take more time to ‘come to hand’ than colts, and there may be good biological rationale to underpin that familiar refrain. Regardless, the data supports the statement – the boys do fare better than the girls in these early weeks of the season. So we’ll focus only on them.

And it may be that, over time, a horse’s appetite for the game diminishes, as well perhaps as their ability. That, too, seems to make sense based on the evidence of the data, with the youngest horses in the sample performing best – in strike rate terms on a decent sample size. We’re looking at horses that have form in the book from a previous season, so that excludes two year olds, and we’re looking specifically at horses aged three to five.

Regarding freshness – or not – I felt there is/was a blind spot in the betting public’s psyche regarding how long a horse has been off the course, and particularly the – symbol to the right of its form figures, implying it hasn’t been seen this year. In fact, while those off the track for 120 days (four months) and more fared well, I wanted to go back to the last turf season – 150 or so days ago.

Equally, I was conscious that if a horse was off for most of last season that was probably due to a problem and, in such circumstances, they might be less inclined to be ready first time out. So I set a cutoff of 300 days (ten months), which essentially means a horse should have raced at least since June of the previous year but no more recently than November.

Phew. Where have we actually got to so far, then? Let’s recap:

– Male horses aged three to five, who last ran between five and ten months ago

That was a lot of words for two lines of rules, but it’s important for me to expand on how I got to where I got – mainly so that you can either agree or disagree with my logic. And, by the way, it’s absolutely fine if you disagree!

And now for the kicker… trainer form.

My reasoning, as outlined above, is that if a trainer has his or her string in good form – at a time when many others are still finding their feet – he or she can make hay for a while. The system covers a really short window in the season, and so I’m looking at a really short form period of two weeks. I wanted a trainer to have had at least one winner in the last fortnight, AND a very solid place strike rate.

The one winner bit is easy and absolute; the place percentage part causes more problems. A trainer might have had a winner and three losers from four runners, giving a 25% place rate, where we don’t really have a lot of data to go at. At the same time, because it’s only a fortnight and we don’t want to ignore the smaller teams who might be fit and firing, I didn’t want to set a large absolute minimum runners criterion. I settled on five runners in the previous 14 days.

Much to’ing and fro’ing later, I got to the following: at least five runners, at least TWO winners (the good old rule of two), and a place strike rate of at least 33%, all in the last fortnight. Whilst one winner provides for more profit, it is also more volatile and less reliable than two, so…

– Trainer has had at least five runners, two winners, and 33% place strike rate in previous 14 days

The full ruleset then is:

– Male horses aged three to five, who last ran between five and ten months ago

– Trainer has had at least five runners, two winners, and 33% place strike rate in previous 14 days

This gives the following:

It’s not an entirely smooth ride, so prepare for a possible correction…

As you can see, 2012 was not a good year (understatement). And note also that, at starting price, there has been another losing year and three about even ones. But who actually bets at SP? 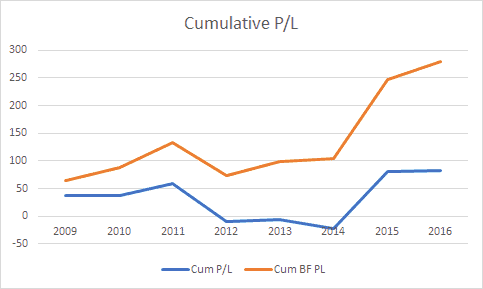 Cumulative profit chart at both SP and BF odds

I was loathe to play around with things any further – keep it simple is a good motto when system building – but I did notice that plenty of these sorts of horses were over-bet, presumably when high profile trainers are in red hot form.

And the corresponding chart: 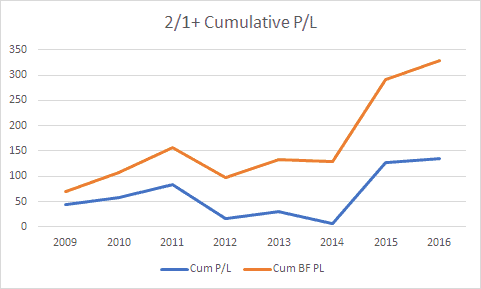 A bit more profit overall from ignoring the shorties…

Predictably enough, ignoring the shorties leads to a lower strike rate, so you need to have discipline and a bank to take this approach. And you need to keep 2012 very much in mind: as London was preparing for those amazing Olympics, so this little system was having a mare.

So, caution is advised if we have a very wet April, but otherwise we might just have a bit of fun with this approach in the coming weeks.

How to find the qualifiers

Finding potential qualifiers is simple enough using the Geegeez Gold racecards. Go to your flat turf race, sort by age on the card, and use the red ‘x’ icon to remove any runners not three, four or five years old. Then click the breeding (brown bracket) icon in the menu bar to view the gender of all runners. Again use the ‘x’ icon to remove any fillies or mares.

Now look for days since a run and remove those outside of our parameters. 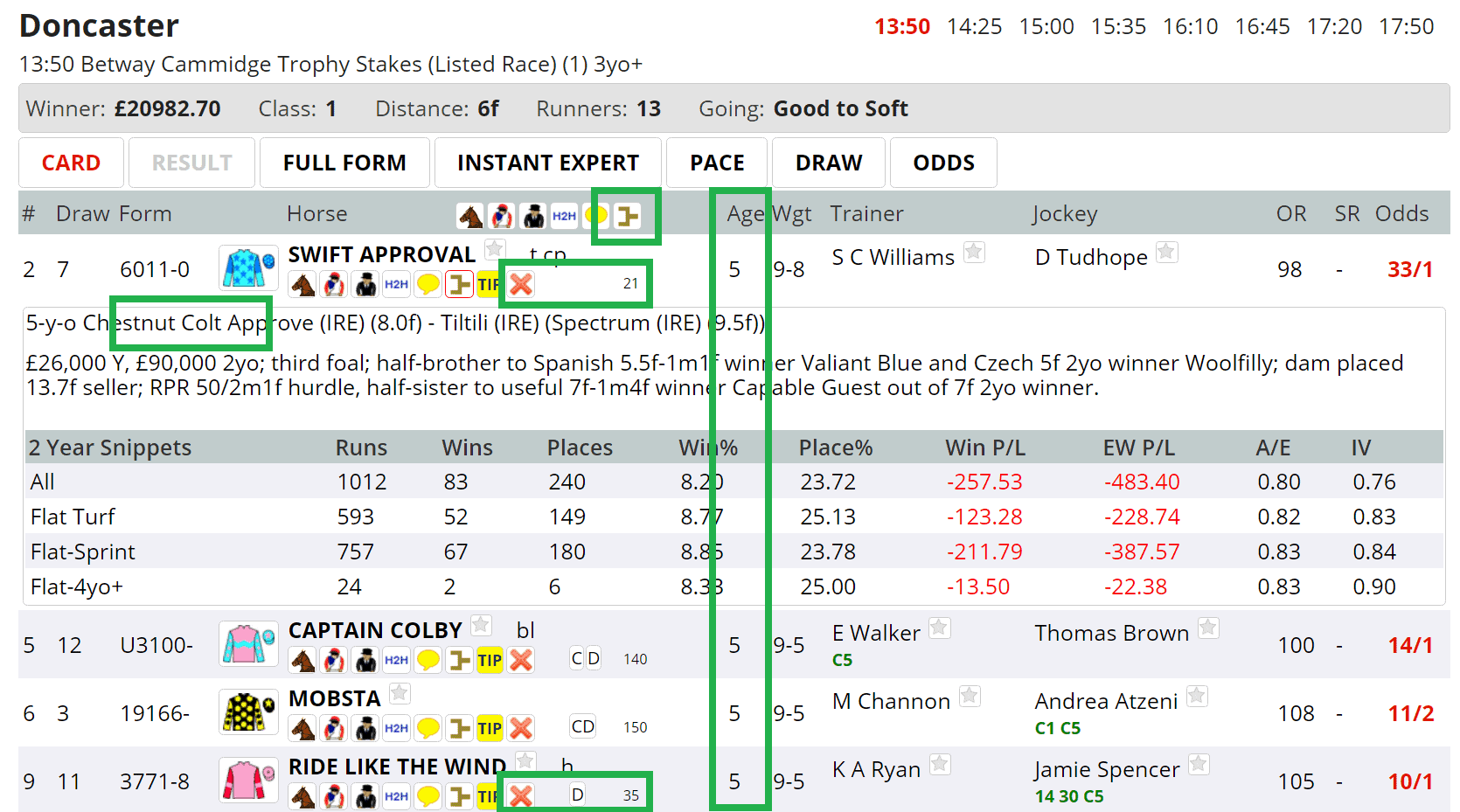 You’ll quickly have a shortlist against which to check for trainer form. To do that, just click the trainer icon (man in black jacket and hat) in the menu bar. In this example, neither Captain Colby’s nor Mobsta’s trainer has had five runners in the previous fortnight. However, and do note this if you’re checking the day before racing, both of these trainers have runners today which – if they line up – WILL get them to the requisite five runs! Just be aware of that.

This is a FUN system that should pay its way, especially if we have a dry spring. But do use caution: the strike rates and that nasty 2012 mean it is very far from a goose capable of laying golden eggs. But, of course, you know that, right?!