There are eight runners in this seven furlong listed handicap, and a lot of the big trainers are represented, in what looks like a very competitive race.

Sir Dancealot is the current favourite at 7/2, and he is trained by David Elsworth. He won three of his five races as a two year old, and appeared to find a mile too far when upped to Group one company in the Racing Post trophy. The drop back down to seven furlongs look sure to suit him, and a big run is clearly expected.

As mentioned yesterday, John Gosden has an excellent record here at Newmarket, and he runs Seven Heavens in this. This Frankel colt is easily the highest on the Speed Ratings, and he looked a potential star in the making when winning his first two races, before destroying his own chances in the Dewhurst by being far too keen. It will be fascinating to see how much he has ‘come on’ over the winter. 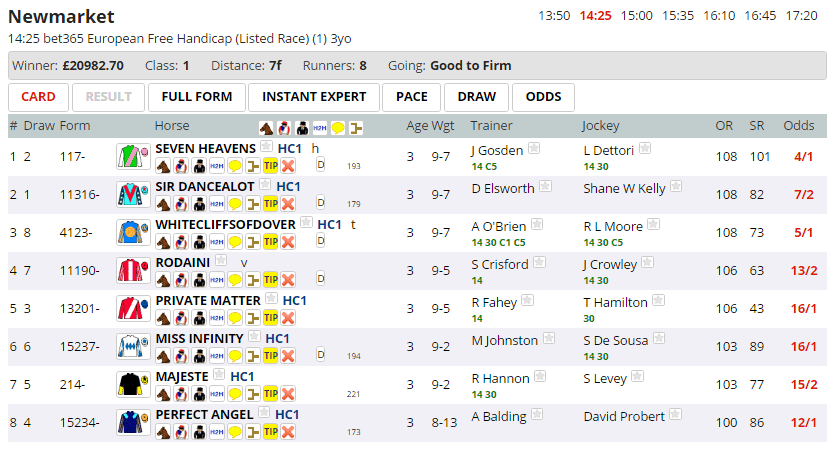 As this is a three year old race early in the season, I wouldn’t expect there to be huge amount of green sections on the Instant Expert report, however Rodaini does have four sections of green, showing his suitability to today’s racing conditions. He has three wins from three races over today’s distance and on the going, so he is definitely one to be taken seriously.

From looking at the pace tab we can see that leaders here over this distance have a very useful record, with 16.69% of them winning their race, for a level stakes profit of 107.85. Prominent runners are comfortably next best, therefore it appears a definite advantage to have plenty of early speed.

The filly, Miss Infinity, has the highest pace score and is a definite front runner, who along with Private Matter look the most likely to be at the head of affairs through the first furlong or so. 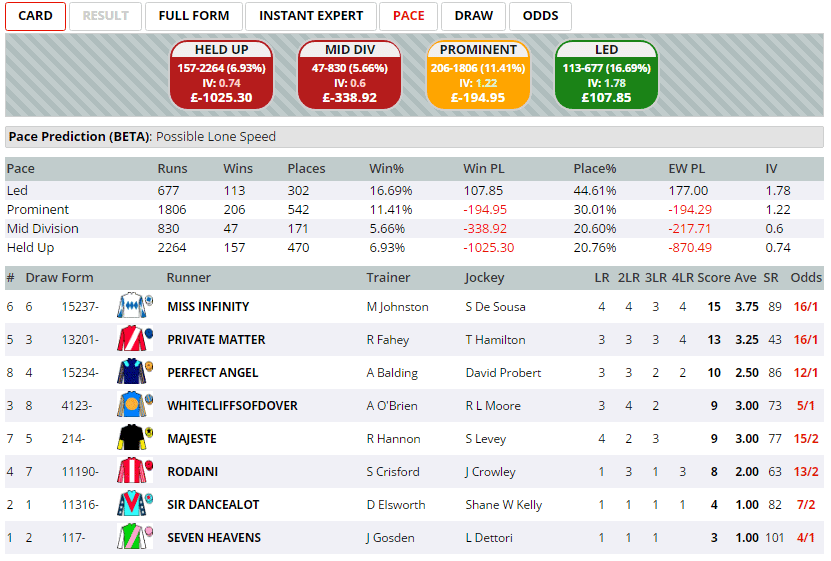 The Trainer Statistics report is the free report to all users on a Wednesday, and when put to the ‘Course 5 Year Form’ setting, it shows us what a great record Mark Johnston has here at Newmarket. For the past five years, he’s had 75 winners (15.43%) from 486 runners, for a level stakes profit of 74.63. He runs Miss Infinity here today, and if she is allowed to dictate things at the front today, I think she has a decent chance of a place.