This is a top quality handicap over seven furlongs, and any one of the seven runners could take this.

John Gosden and Frankie Dettori have had a good week at Newmarket so far, and they team up with Castle Harbour here. They have an excellent record together at Newmarket over the last five years, with 24 winners (31.17%) and 41 places (53.25%) for level stakes profits of 22.06 and 18.27 points respectively. Castle Harbour is also top of the Speed Ratings, with a mark of 100.

The Instant Expert report is free to all users for every race on a Thursday, and Salateen stands out with a lovely full line of green, over quite a good sample of races. He has won one out of two races here at Newmarket, and seven furlongs definitely appears to be his optimum trip. He is five pounds higher than for his last victory on turf, but won a Listed race on the all weather from a mark of 104, so I think he will cope fine with his current mark.

Tabarrak has four sections of green on this report, with just the section for the course being red. He did finish second with these two runs however, and if anything, I think it will be the eight pound rise in the weights and almost a year off the course, that stop him from winning this.

The Pace report shows that leaders at Newmarket over this distance have a very good record, with almost 17% of them going on to win, for a level stakes profit of 115.35.

Salateen looks certain to be taken straight to the front by Ryan Moore, and he will look to set a decent pace and try to make all.

Tabarrak has also been very quickly away in his last two races, so may dispute the lead with Salateen, which could mean the pace is very fast. 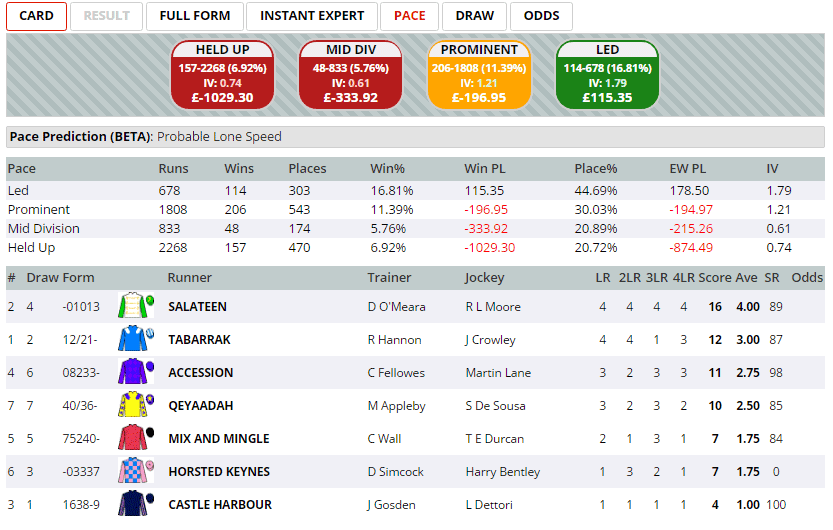 The Draw report shows that high drawn numbers are generally the least productive with this field size, although a third of them have gone on to be placed.

Horses drawn towards the centre have the best record, and with Salateen drawn in stall four, the race is likely to revolve around the field following him and trying to pass in the final couple of furlongs. 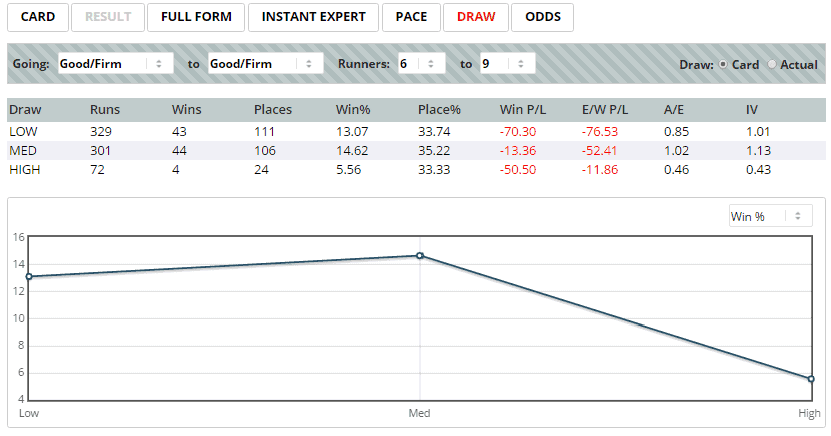