This is quite a nice looking handicap hurdle at Perth, being run over two and a half miles, for those rated 0-120.

Druid’s Folly is at the top of the handicap, and he is trained by Fergal O’Brien and ridden by Paddy Brennan. This pair have a great record here at Perth, as over the last five years they’ve had 10 winners (32.36%) and 13 places (41.94%) from 31 runners, for level stakes profits of 25.13 and 22.88 respectively. Druid’s Folly has been running very consistently having won twice out of his last five races, and if he can prove as effective on today’s good ground, then he could be a major player.

Stick To The Plan has had just the three races so far, but looks an interesting proposition now he has qualified for a handicap mark. His trainer, Dan Skelton, has been finding plenty of winners recently and over the past 30 days he’s 24/105 (22.86%) for 11.86 points. 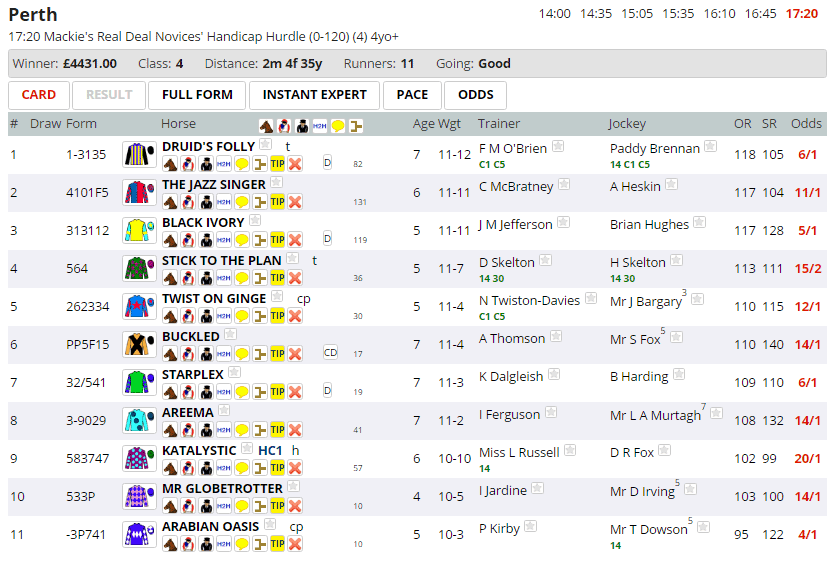 The Instant Expert report is free to all users for every race on a Thursday.

In a field where there aren’t too many sections of green (and a lot of red), Black Ivory really stands out. He has four sections of green and one of grey, due to not having run here at Perth before. This shows that he is very well suited by the conditions here today, and if he is nice and fit after a four month break, he looks to have a very good chance. He is seven pounds higher than for his last win, however last time out under the same weight he was going very well before blundering badly through the penultimate hurdle, which ruined any chance he had of winning.

Buckled is one of the longer priced runners at 14/1, but he does have one section of green to go with another three sections of amber, and is the only horse in the race to have won here at Perth.

The Pace report shows us that prominent runners have the best record here over this distance, with a little under 15% of them winning.

There are no real confirmed front runners in this field, although Starplex and Black Ivory are normally towards the front of the race, and these two have the best pace score. The rest of the field are usually content to sit in behind, so it will be interesting to see if the two of them can get a bit of a lead early on, and if so, they may prove tough to peg back. 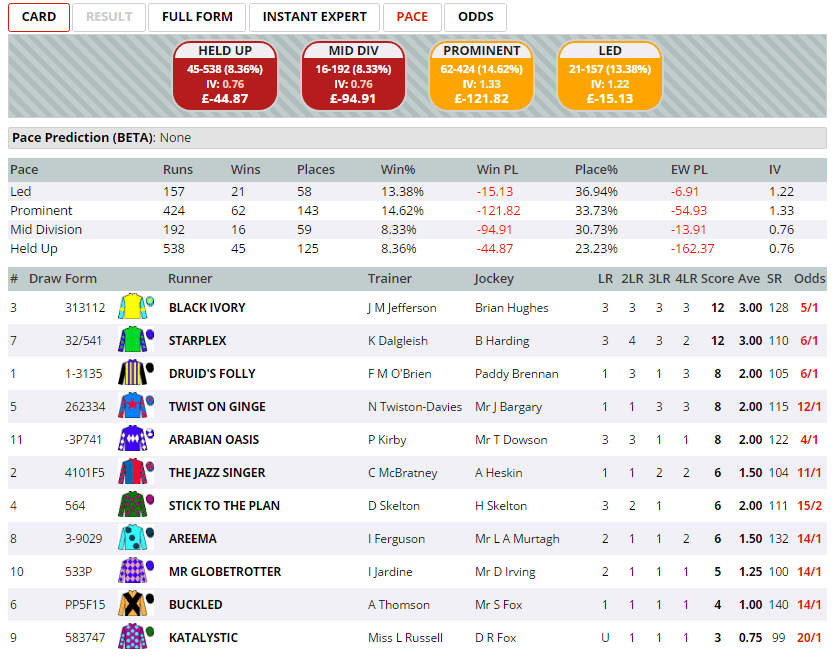