Arguably the best race on the supporting card for this Saturday’s 2000 Guineas at Newmarket is the five furlong Palace House Stakes, a Group 3.

Before you think, hang on, there’s a Group 2 on this card (the Jockey Club Stakes), consider this: the last seven winners of the Palace House Stakes have gone on to win in Group 1 company that same season. It is a superb trial for the King’s Stand Stakes at Ascot, with Equiano, Sole Power twice, Goldream and Profitable all winning here and then there; but Tangerine Trees also managed to win the G1 Abbaye at the end of a season which began in the Palace House, and Mayson snaffled the six furlong July Cup having earlier claimed this prize.

This race is a very strong pointer to future Group 1 sprinting prizes: follow the winner closely. Especially seeing as Tangerine Trees was 14/1 when scoring in his G1, Goldream was 20/1 and so too was Mayson. Equiano was 9/2, and Sole Power was 8/1 and 5/1 when winning his brace of King’s Stands, and Profitable was 5/1 when scoring in the same race last season. Yum.

That’s all well and good in terms of the future, but what about this year’s Palace House Stakes and finding the winner there?

It is worth noting that the winner has been a fancied runner – 15/2 or shorter – in twelve of the last fifteen years. And those drawn low have slightly outperformed numerical representation, with middle faring better than high, judged on that same basis.

Looking more generally at races run at Newmarket over this distance and in big fields, since 2009, the Geegeez Gold DRAW tab reveals the following: 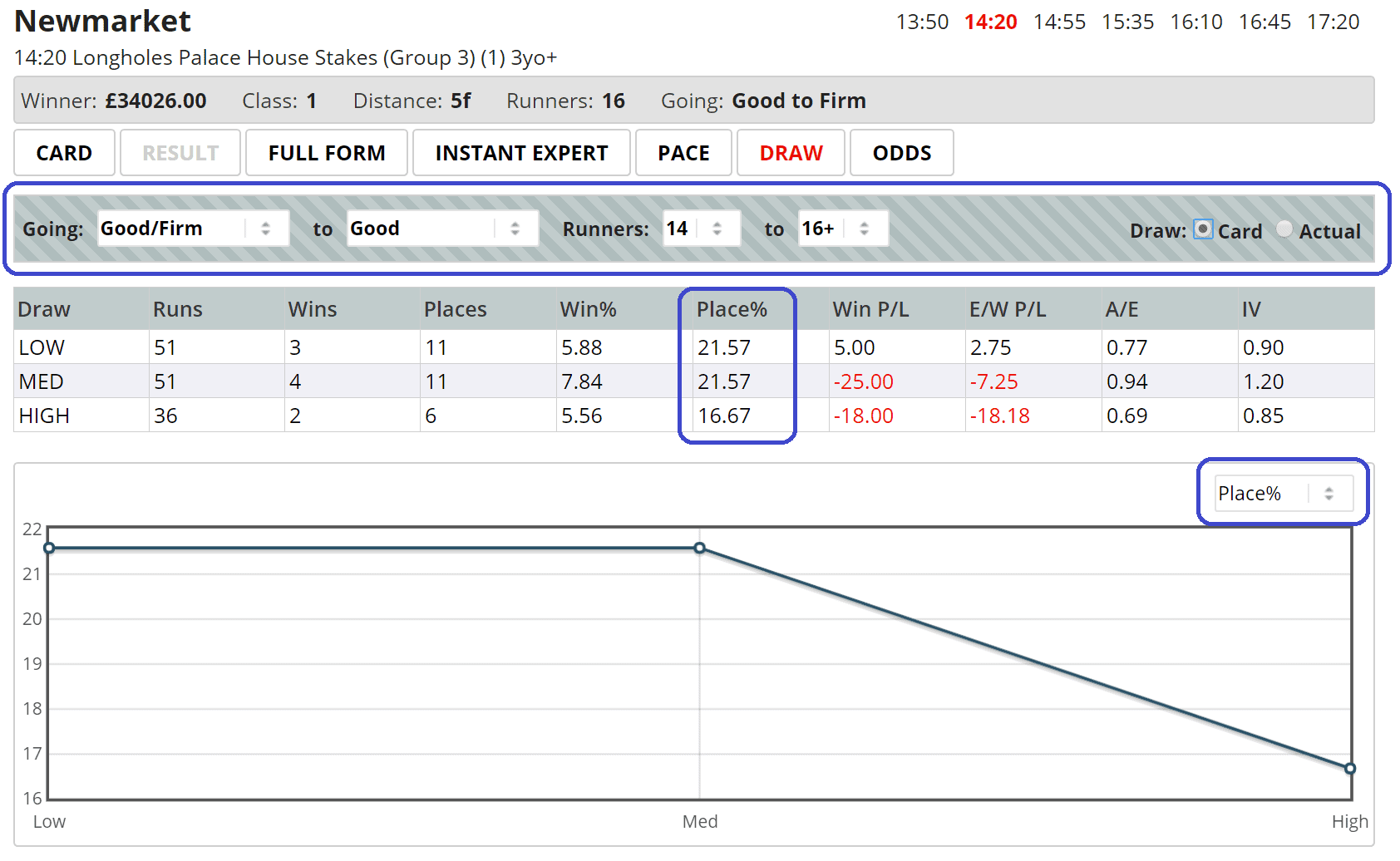 This year, the horses are drawn as follows, which might be a help for the likes of Profitable and Muthmir and/or a hindrance for Washington DC and the penalized Marsha. This information can be found on both the main CARD tab and the PACE tab in Geegeez Gold racecards. 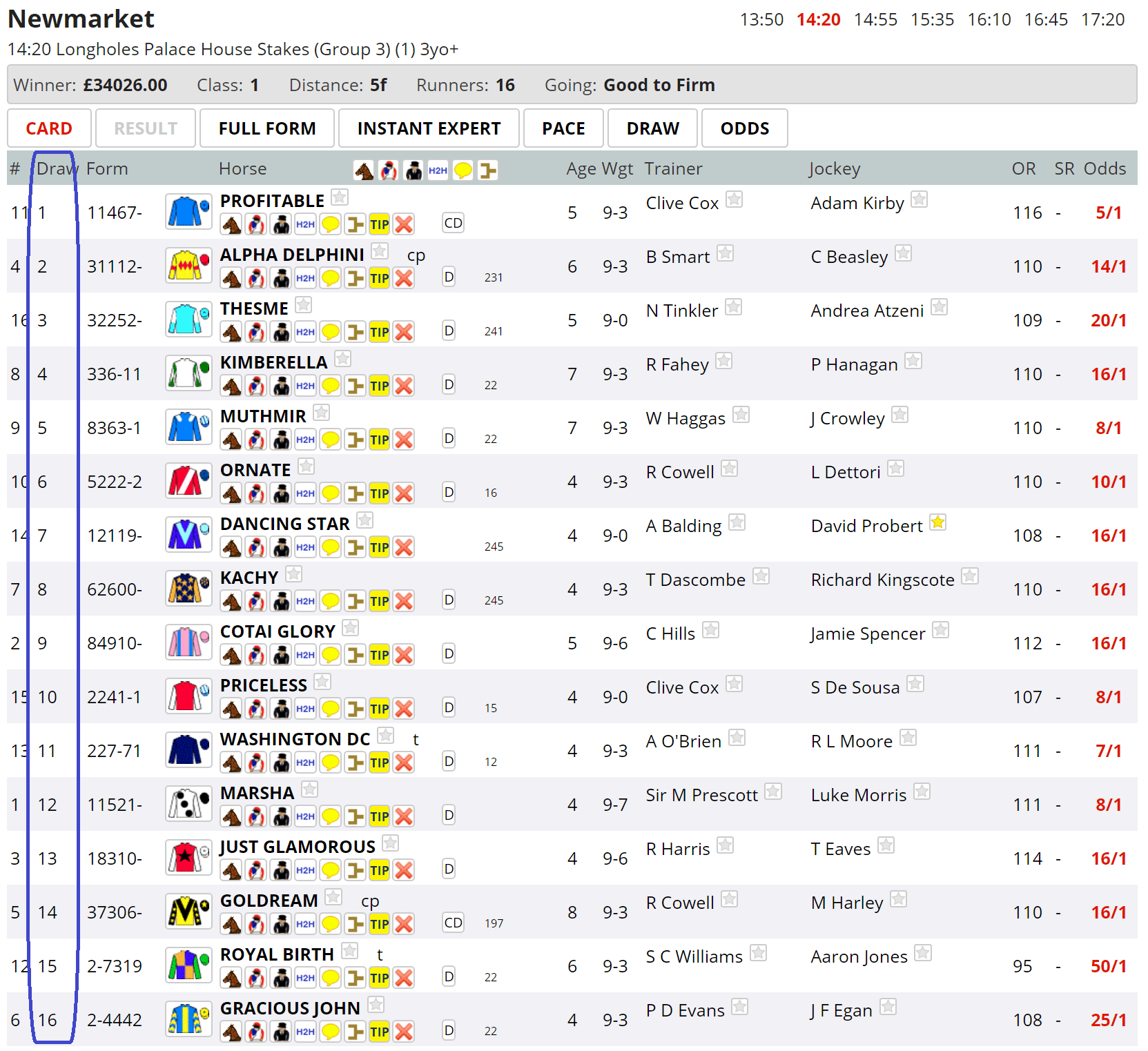 Draw is an advantage (or not) bestowed by Lady Luck whereas form in the book is earned. Below is the record of the field against the current race’s key conditions – going, class, course, distance and field size – in all UK/Irish races, as shown on the INSTANT EXPERT tab on our race cards. 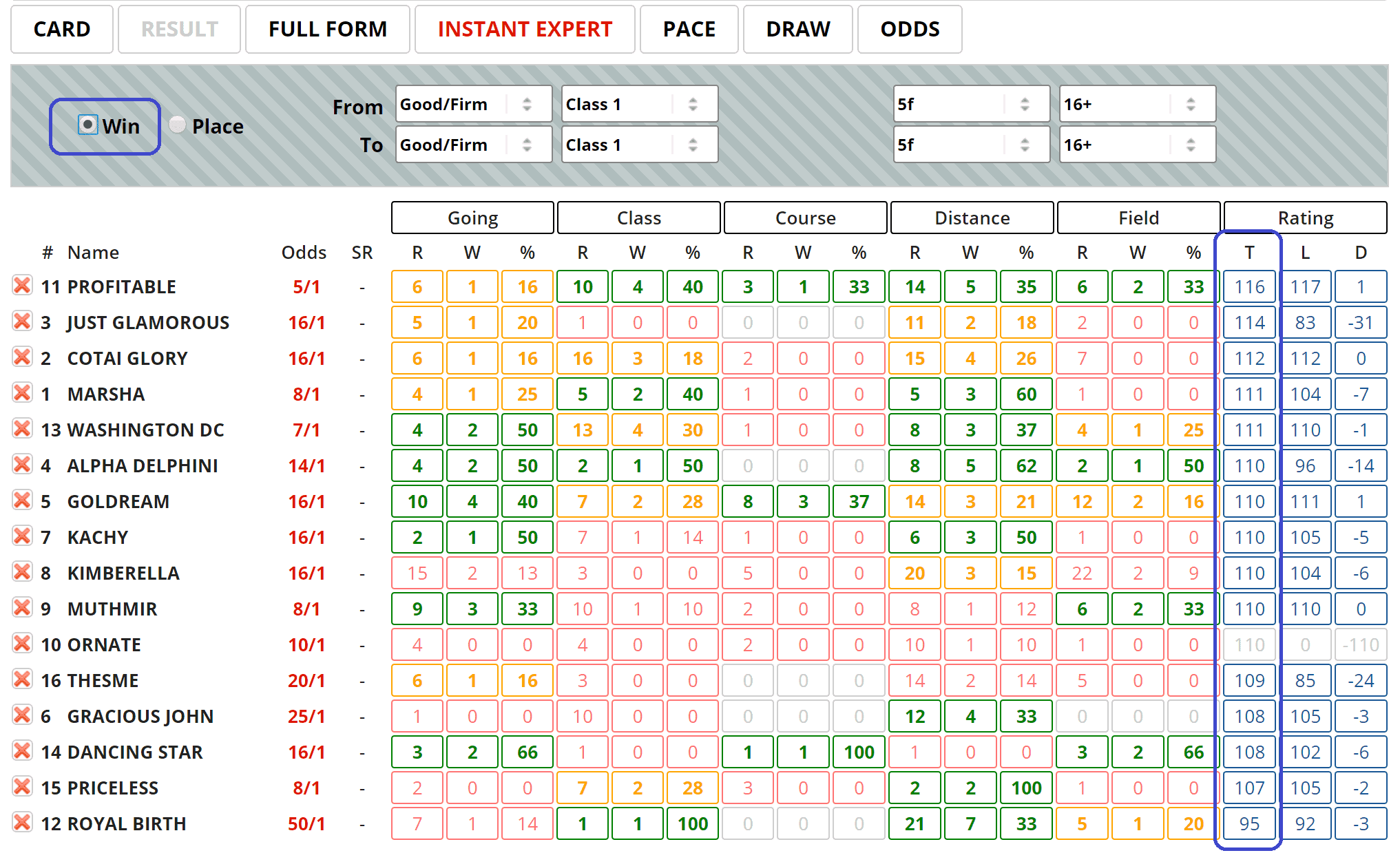 And, because it often shows a more rounded view of the form, here is the same profile filtered on PLACE data: 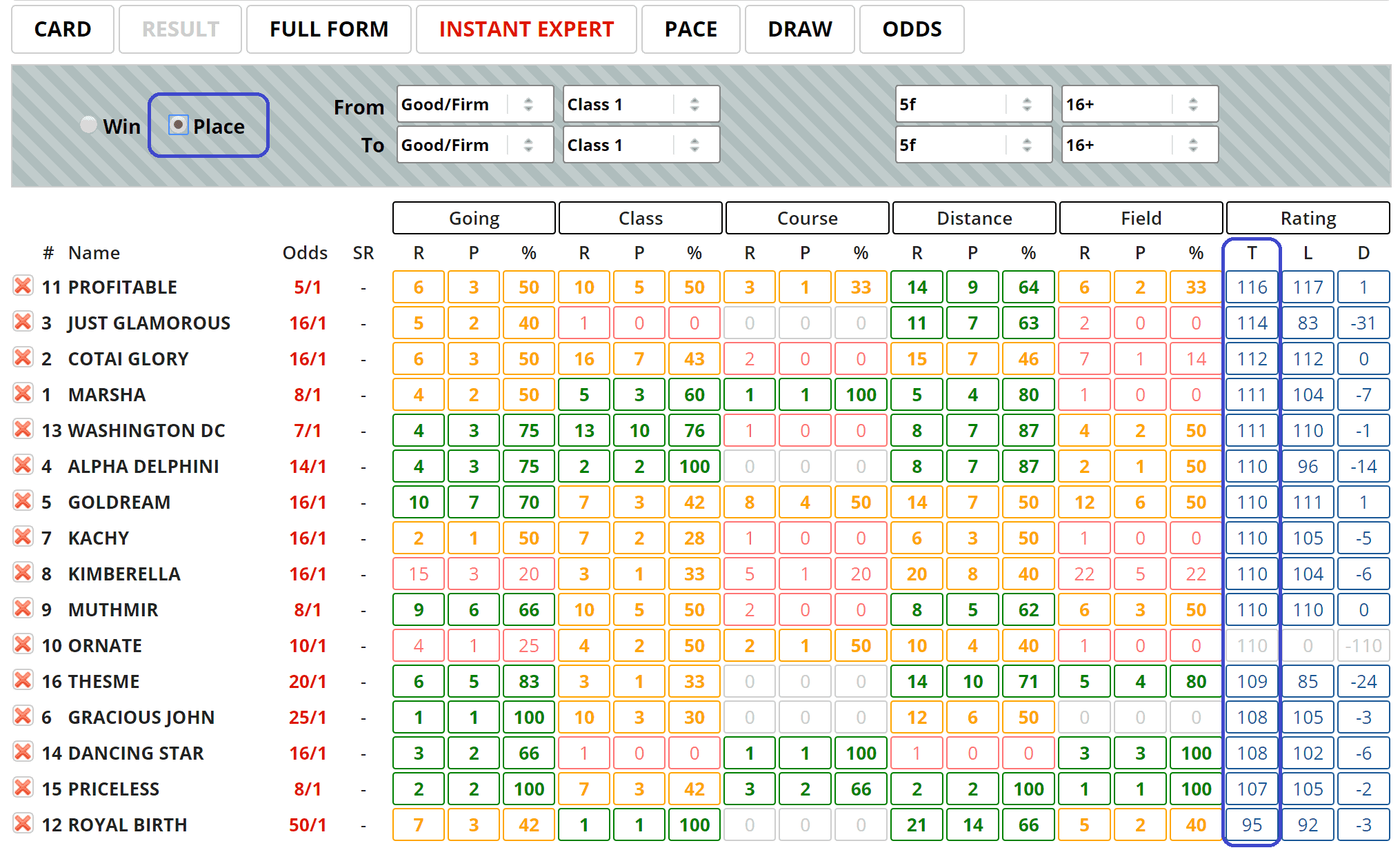 We can see that most of the field are regulars in the places at this five furlong trip, but a couple who catch the eye as highly consistent against the Palace House conditions are Priceless and Alpha Delphini. The latter has a nice draw in stall two, whereas the former is drawn a bit higher, in ten.

In my opinion, the most often overlooked critical piece of information in UK and Irish form reading, is pace. Specifically, how will the race be run: which horses will race prominently, and from where in the draw – and therefore where on the track – are they likely to congregate?

Our PACE tab, which – like all of the Geegeez Gold tabs – can be sorted by any column the user chooses, shines a bright light on how the race is likely to be run. We already know from the draw information higher up this post that horses drawn low to middle tend to be favoured. And we can see from the traffic light ‘blobs’ highlighted below that horses running on or close to the pace (LED or PROMINENT) have fared best over this course and distance.

I’ve sorted the view below by draw, so we can see where on the course there might be ‘pockets’ of pace: a scenario which might lead to one part of the track being favoured. In this race, there is a good smattering of early pace – identified by scores of 14-16 – across the field, and it may be that the race plays out around the centre of the track. That may again be in Priceless’s favour. 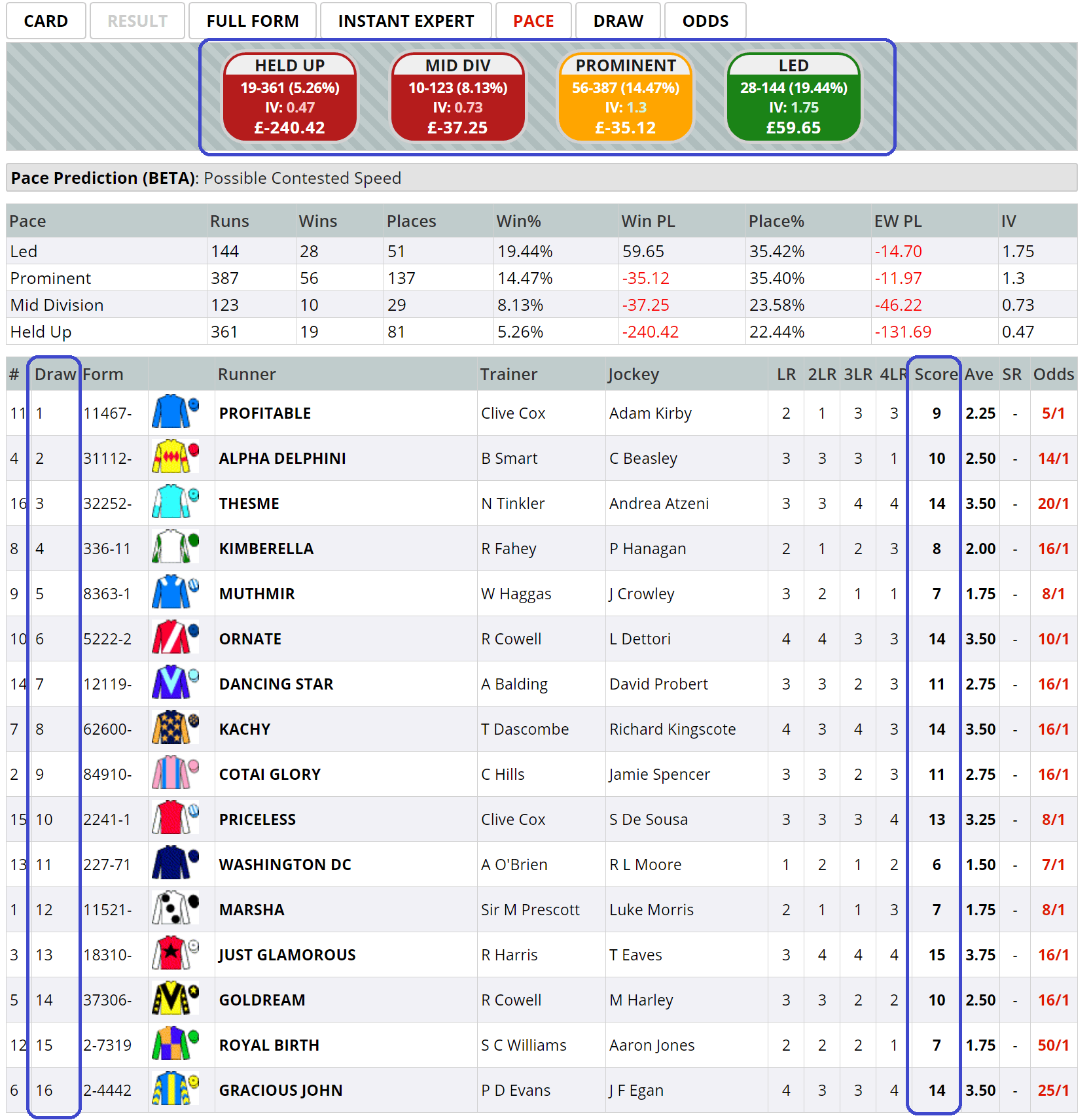 BRINGING IT ALL TOGETHER

Very quickly then, we have a view on how the race might be run (PACE), which horses have shown the most relevant form (INSTANT EXPERT), and whether any part of the track may be favoured (DRAW and PACE).

We noted that Priceless had a little in her favour, so let’s have a very quick look at the FULL FORM tab for Clive Cox’s filly. Here I’ve checked the ‘distance’ filter to check her record specifically at the Palace House trip of five furlongs. 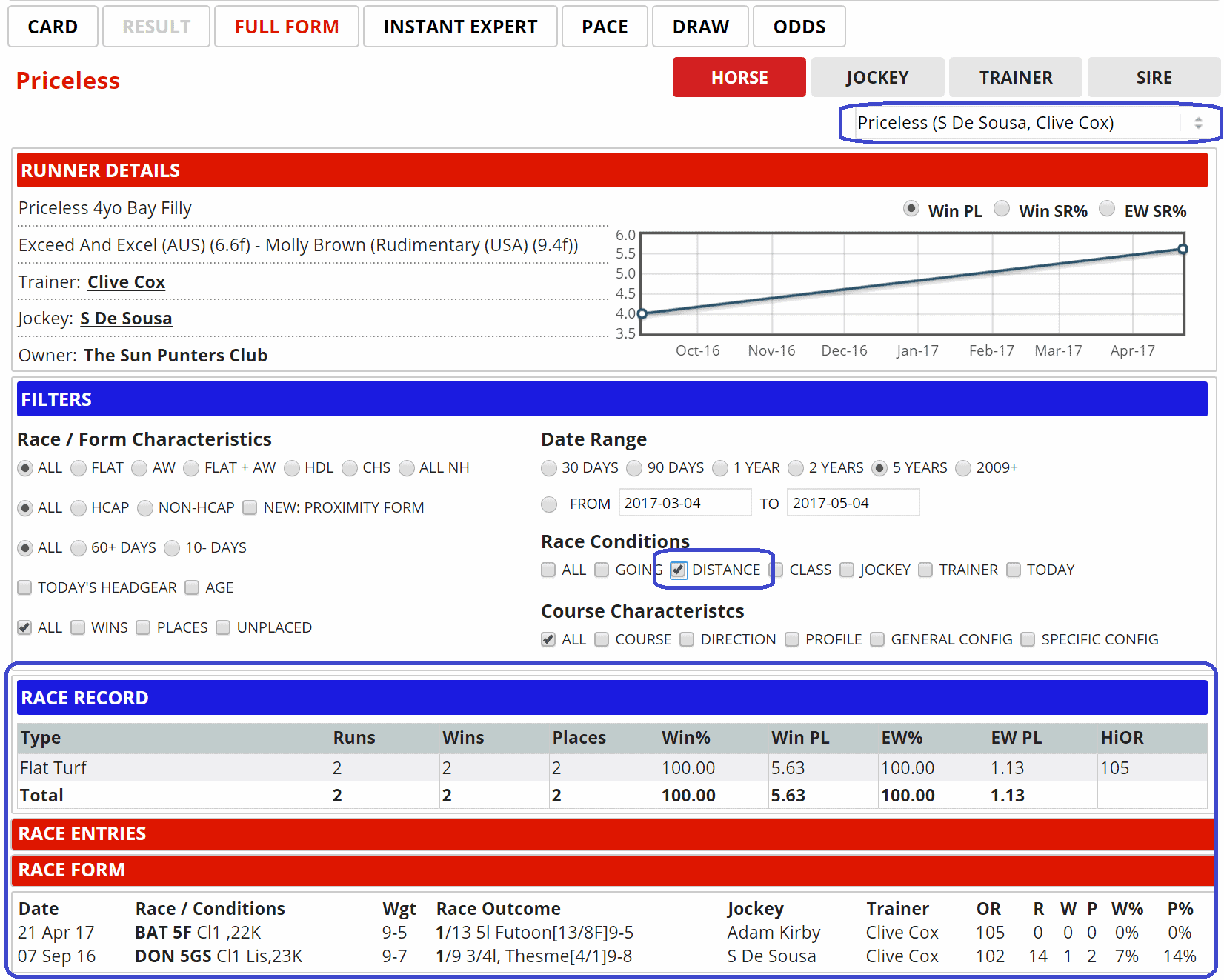 We can see that she’s two-from-two at five furlongs, and I can also share that those are her most recent two starts, both in Listed class. She steps up to Group 3 here with no worries about the ground (won on firm last time) and for a trainer who has an excellent record with sprinters (20.43% win rate over five furlongs in the last five years – see below). 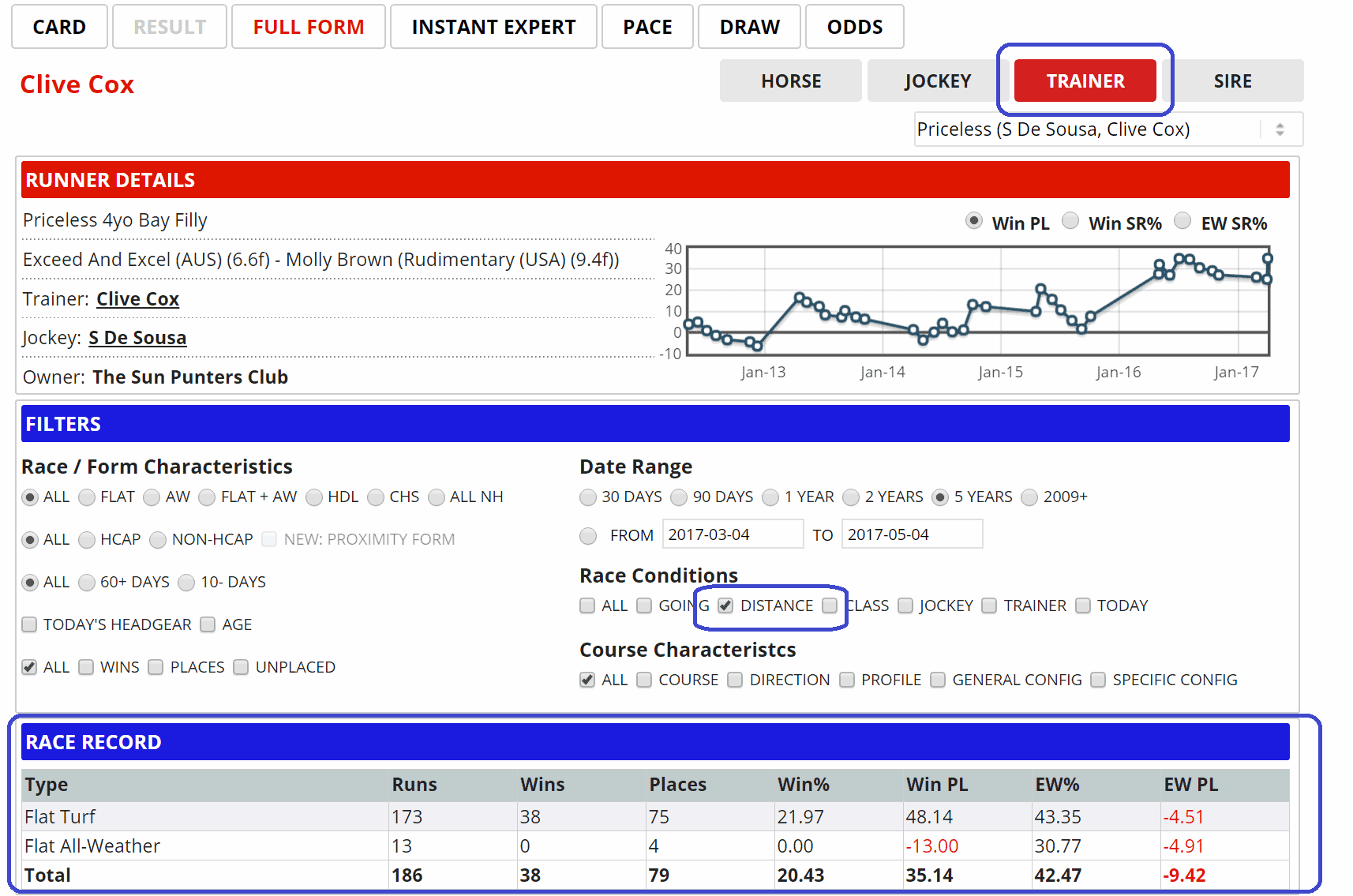 All in all, PRICELESS looks a very interesting play in the Palace House Stakes at a general 8/1 as I write.

This is just a fraction of the power housed inside Geegeez Gold, a next generation form book which relies heavily on colour and visualization to help its growing army of subscribers to discern a huge amount of information in a short space of time. They probably know more than you, and they probably know it more quickly! 😉

If you’ve never experienced Gold, you can put it to work for you for a full month for just £1. CLICK HERE TO GET STARTED