This is a five furlong dash at Chepstow, with a very open looking feel to it.

As they will be going at a full speed for as long as possible, with it being the shortest distance, the Speed Ratings should, theoretically, be at their strongest. Powerful Wind comes out on top with a mark of 85, and he is a full eight clear of the next closest.

Ed De Giles, who runs Quantum Dot, has a very good past record here at Chepstow. Over the last year he’s had five winners (38.46%) and seven places (53.85%) from 13 runners, for level stakes profits of 20.25 and 24.89 respectively. He also has a useful record with last time out winners, with one in five winners and returning a small level stakes profit. 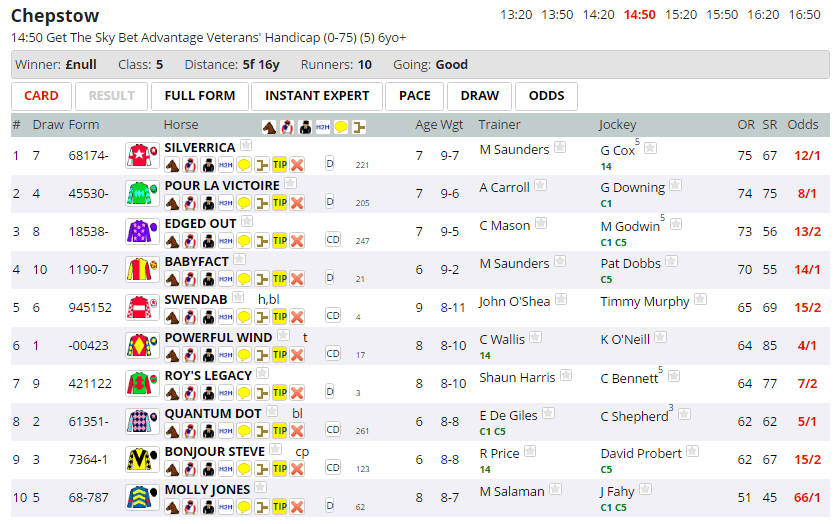 There aren’t huge amounts of green when looking at the Instant Expert report, however when switched to the ‘Place’ setting, Pour La Victoire comes out quite well. He has two sections of green and three of amber, showing he is reasonably well suited by these conditions. He is four pounds higher than for his last win, however he has run well from a higher mark than today’s, therefore if he is on form, he has definite place claims.

When looking at the pace report if becomes apparent how important it is to be right up with the pace, early on. Over 25% of early leaders have gone on to take the victory, for a level stakes profit of 118.33. Prominent runners have also returned a level stakes profit (55.36) with 14.20% of them winning.

Quantum Dot and Powerful Wind are both confirmed front runners, and as they are drawn right next to each other in stalls two and one, there is a good chance they will take each other along and the early pace will be among the low numbers. 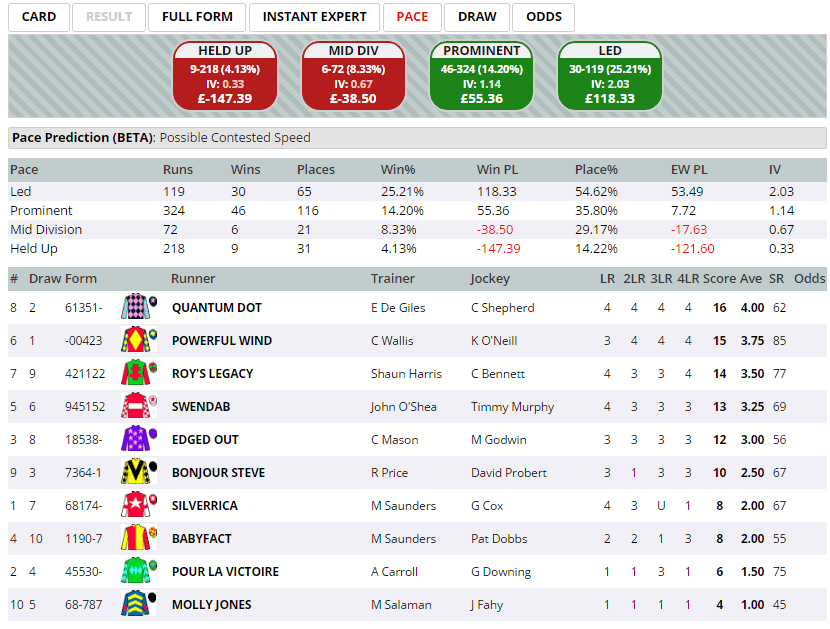 Horses For Courses is the report that is free to all users on a Friday, and it shows Powerful Wind has a liking for Chepstow. Although only having the two races here before today, he has won both of those and yielded a level stakes profit of 28.00. He looks good for another bold showing here, and is overpriced at 4/1, in my opinion.