This is a three mile handicap chase on good ground at Ffos Las, and with the outsider of the field as short as 16/1, it looks a very open race.

Peter Bowen has two runners in the race, and he has quite a useful record here at Ffos Las. Over the last year he’s had 11 winners (22.45%) from 49 runners, for a level stakes profit of 0.83 points. Earthmoves is one of his runners, and he has recently moved to Bowen from the Paul Nicholls stable. 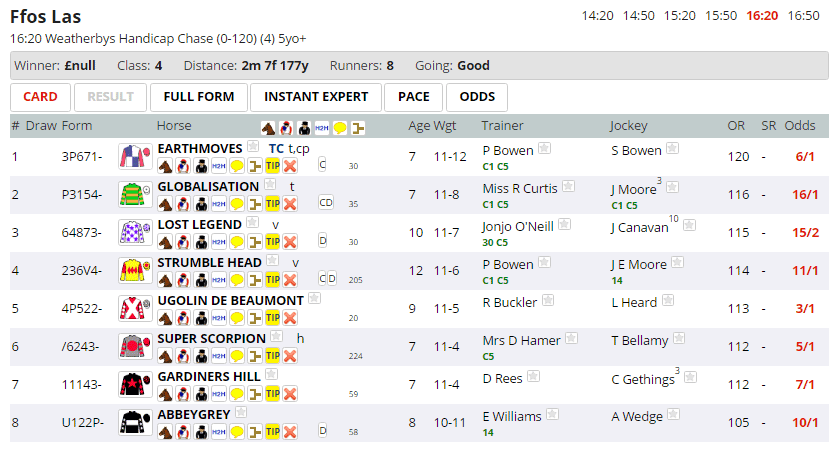 The Shortlist report is free to all users on a Tuesday, and when on the ‘Place’ setting it shows us that Ugolin De Beaumont is very well suited by today’s conditions. He has a score of ten, with three sections of green and one of amber, his only blank section being as he has never races here at Ffos Las before. He is the current favourite at around 3/1, has been running consistently of late, and as he has conditions in his favour, looks sure to go close.

The Instant Expert report also shows that Earthmoves is relatively at home in these conditions, with two sections of green and two of amber. It is interesting to note that he is five pounds lower than for his win last time out in a selling chase, therefore if he has taken to his new surroundings, then he could be a big player here today.

Surprisingly, for a race of this distance, the Pace report shows us that early leaders here have a very good record. 21.43% of them have gone on to win the race, for a level stakes profit of 4.72.

Strumble Head and Super Scorpion are both usually towards the head of affairs early on, and along with Earthmoves and Ugolin De Beaumont look to be the likeliest to be leading over the first few furlongs.

As there are quite a few of them that like to get on with things, there could be quite a bit of early pace, which would set things up nicely for those in the field with plenty of stamina. 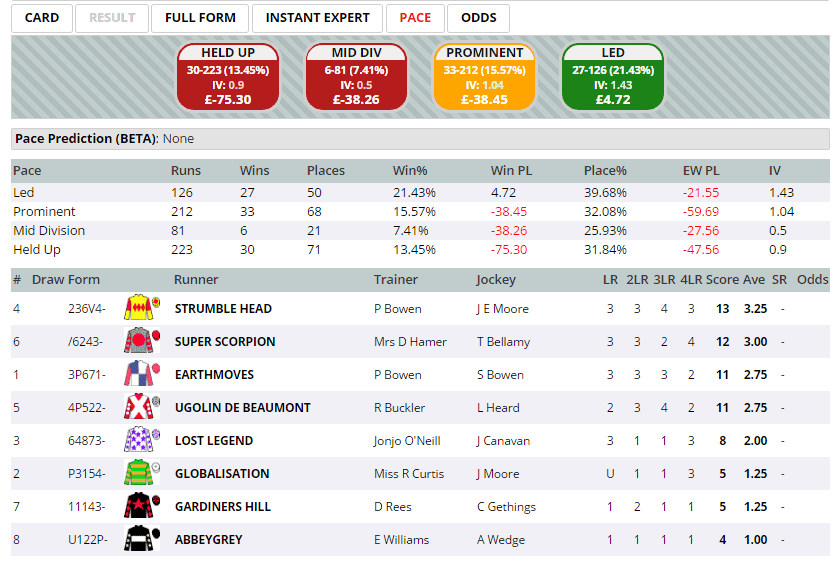 Stat of the Day, 9th May 2017 Some thoughts for Chester’s May meeting
Scroll to top