Chester’s May meeting is an early season highlight, offering socialites, more serious racegoers and the occasional Derby aspirant the chance to peacock around the Roodee. The famous bullring circuit, just nine furlongs in circumference, is fiendishly tight and there is a commensurate bias to those who are agile – and fast – enough to slide around the inside banister.

geegeez.co.uk has more information on Chester racecourse here. But what can we say specifically about the May meeting at Chester?

Using geegeez.co.uk’s new Query Tool (QT) enables us to look at recent trainer form for a specific event like this. To do so, select the month of May, and Chester in the course area:

By placing a check in the circle to the left of the ‘TRAINER’ parameter and clicking ‘Generate Report’ again, we can see trainer performance for the Chester May meeting. I’ve sorted by number of wins in the image below. 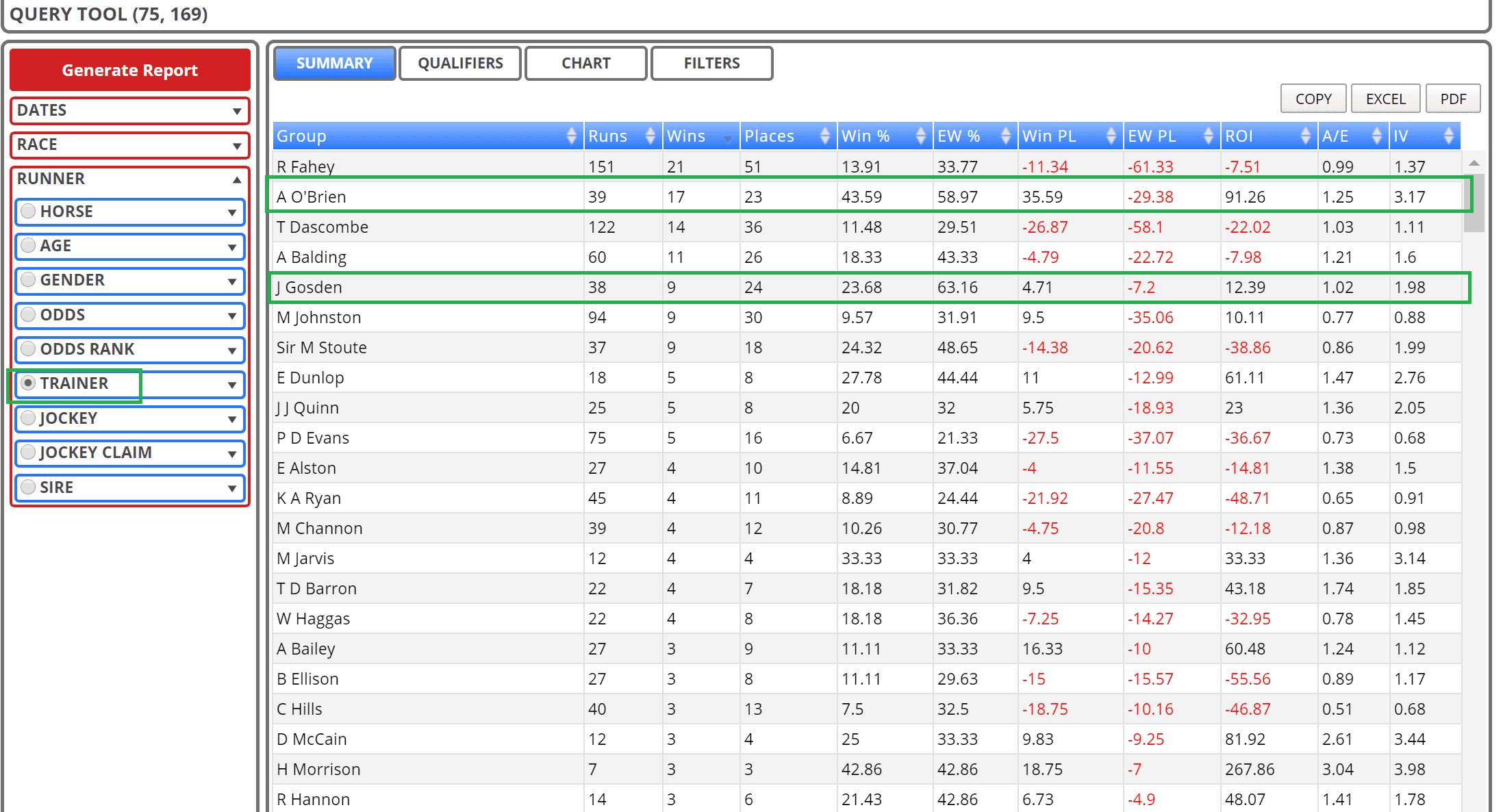 The performance of Messrs. O’Brien and Gosden is spectacular, the former recording a 43.5% win strike rate, the latter a 63% in the frame record. And that from approximately five runners each per year.

But what of the handicaps only? There are some super competitive heats over the three days and, at that slightly lower level, different training names come to the fore. Let’s add HANDICAP to our list of filters, and do the same ‘Group by Trainer’ report: 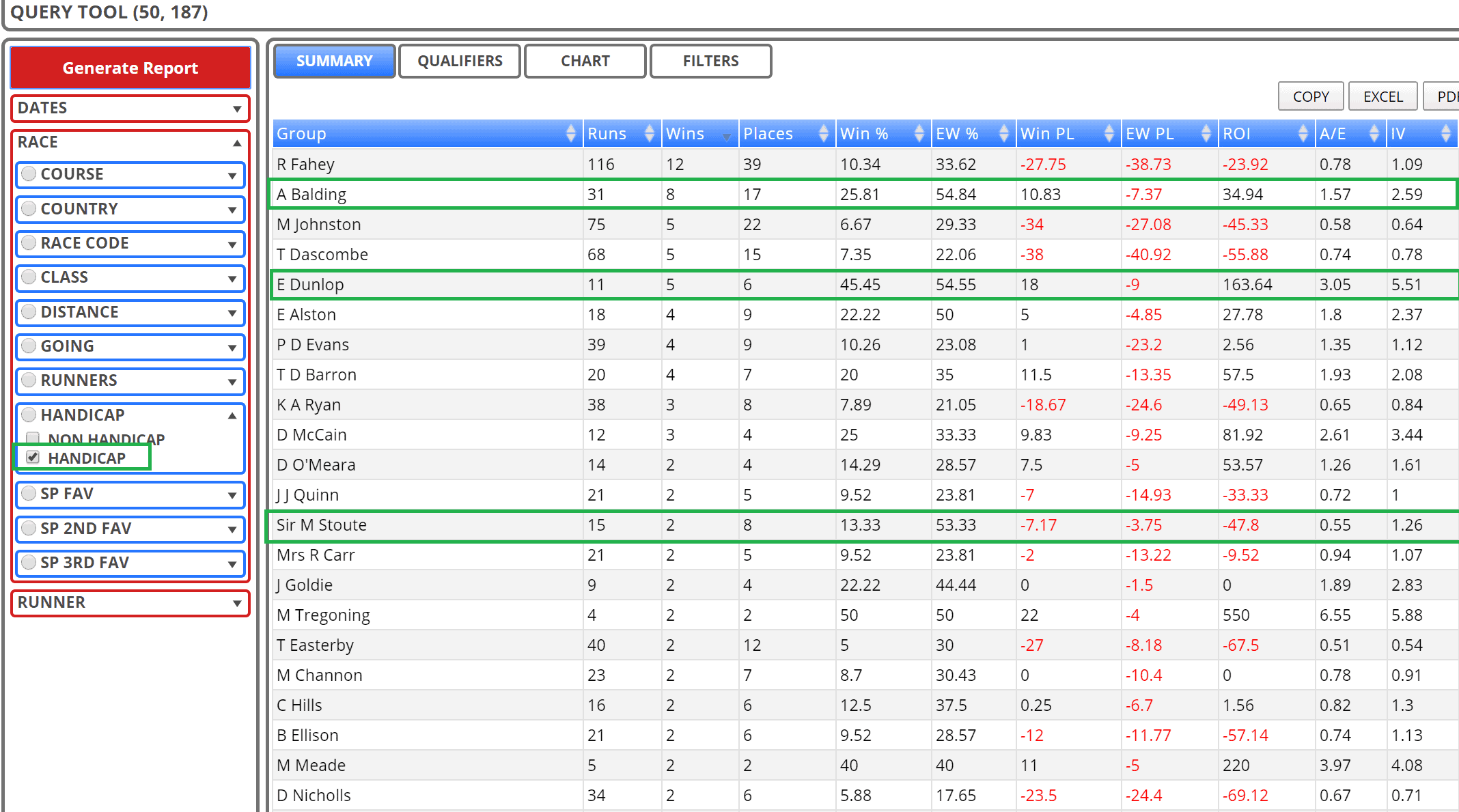 Andrew Balding and Ed Dunlop have excellent records, and Sir Michael Stoute has been very unlucky in Chester May handicaps

It is easy to see that Ed Dunlop and, from a larger sample, Andrew Balding have fared really well in Chester May meeting handicaps. But it is also worth noting Sir Michael Stoute: his two from fifteen record is unremarkable, until we note that more than half of them have hit the board. It would be no surprise to see Sir Michael’s fortunes change this week.

What about the top races?

Selecting Class 1 (i.e. Listed or Group) races only confirms the stranglehold that Team Ballydoyle has on the big races at Chester’s May meeting.

Aidan O’Brien has won 16 of the 40 Pattern races run at Chester in May since 2009. That’s 40% of them, from just 34 runners. His performance is incredible and looks set to continue this week with a typically strong hand of three-year-olds and older horses.

As alluded to in my introduction, the draw at Chester has a huge bearing on how races are run, especially over sprint distances. Using geegeez.co.uk’s Draw Analyser tool, we can see just how relevant a good draw generally is, especially when the going is on the quick side. The forecast is largely dry for the week and the current going description is good, good to firm in places.

Let’s plug that into our Draw Analyser, along with a selection of handicap races only and 10+ runners; and we’ll initially look at five to five and a half furlong races. 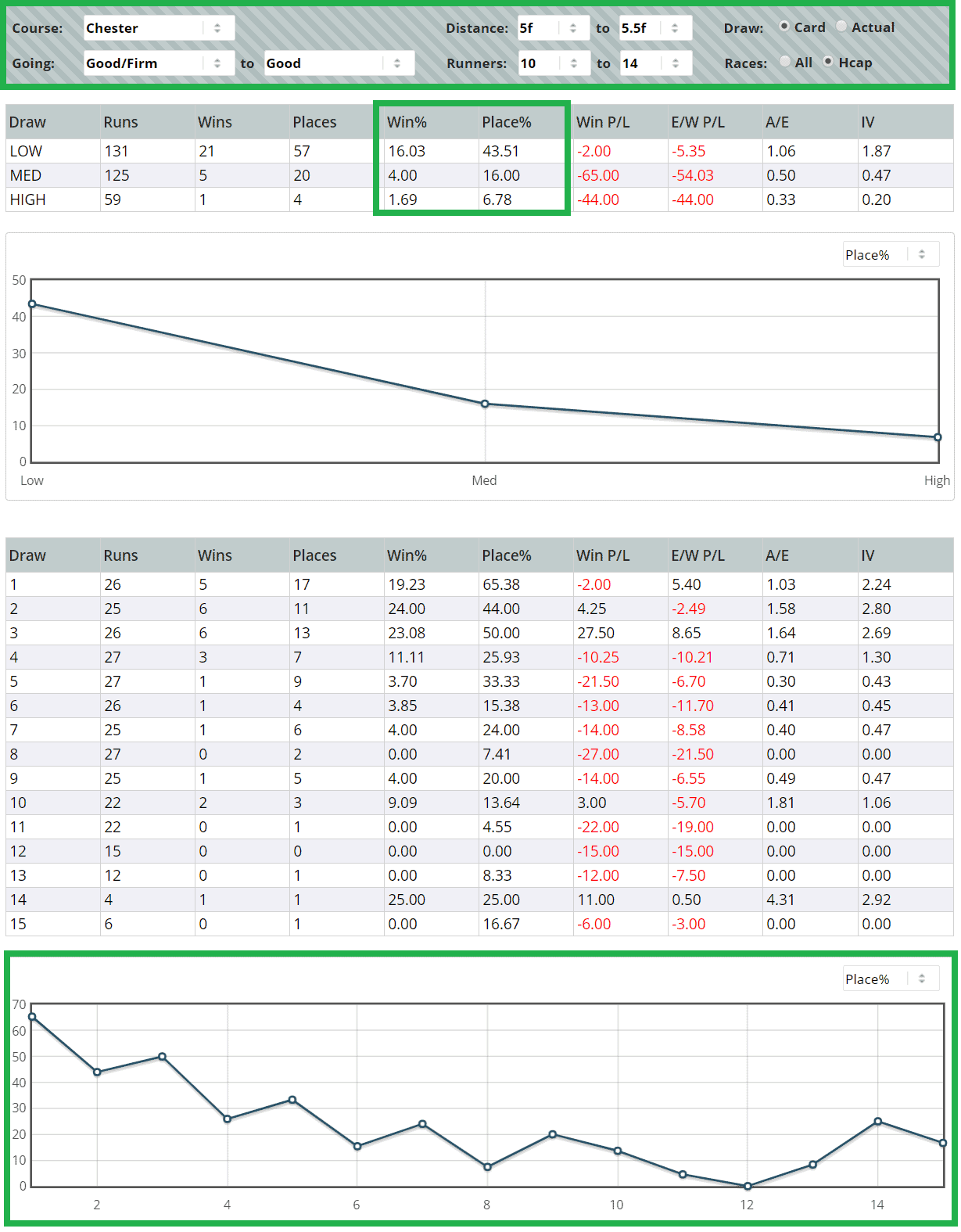 Low is heavily favoured at the shortest trips; and high is heavily UNfavoured

I wanted to include the constituent draw table so that you could see the strong linearity in the place percentages of finishers by stall position. That stall 1 has made the frame in two-thirds of all five and five-and-a-half furlong sprints in big fields on quick ground since 2009 is telling. No wonder so many absentees emerge from the car park post positions.

So far so obvious, perhaps, though it is always interesting to note the concrete evidence data provides to support or resist a general perception. But what of longer sprint trips? What of six- and seven furlong handicaps? A quick change to the distance ranges and we have our answer: 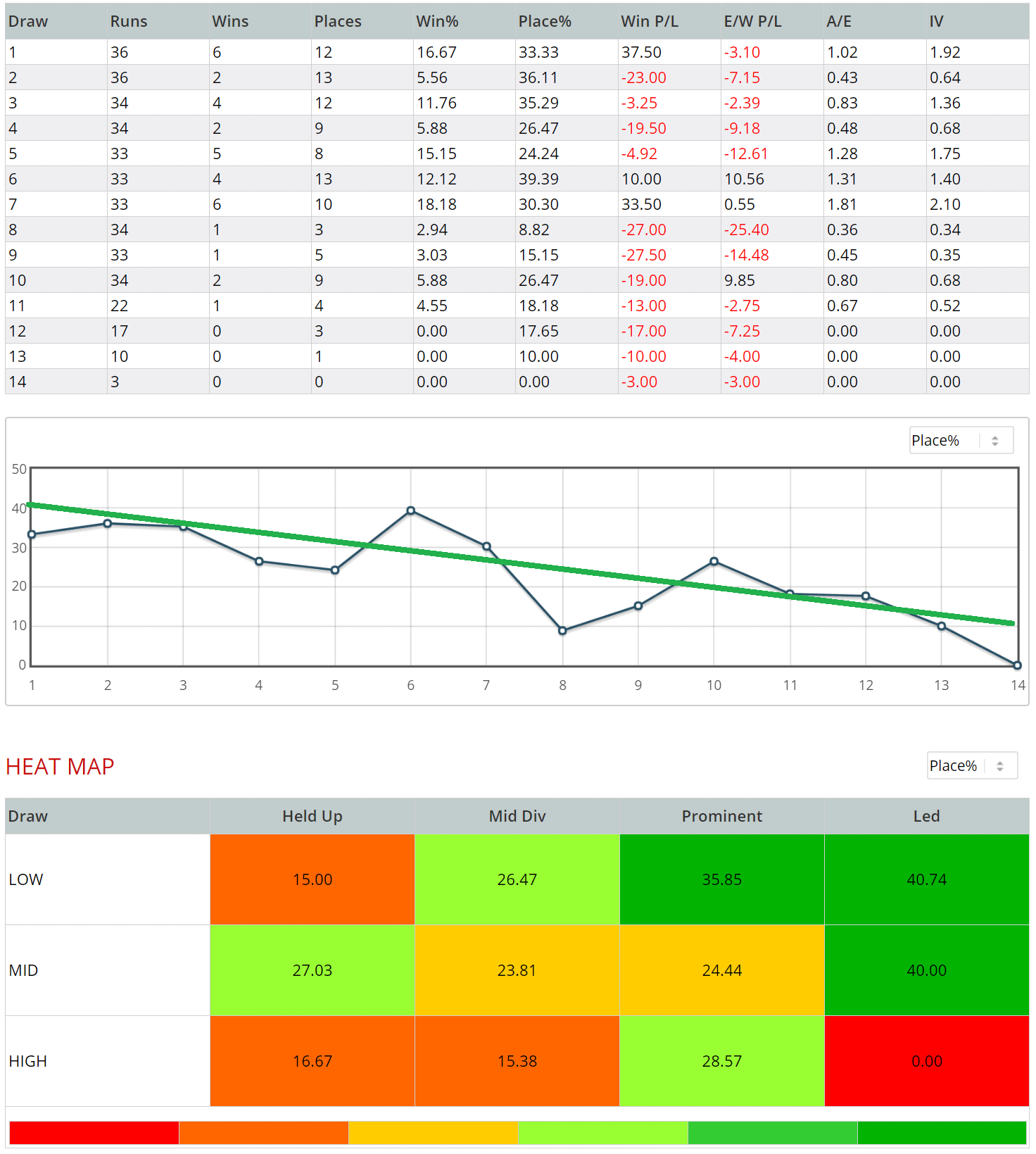 Still an inside draw bias, but it is less pronounced over 6 and 7furlongs at Chester

As you can see, there is still a bias towards those drawn low but it is not nearly as pronounced as over the shortest distances. Indeed, middle drawn horses have fared pretty much as well as those on the inside, but it is still the case that a high draw is a very difficult condition to overcome.

Notice at the bottom the Heat Map. This is a simple chart that attempts to overlay the historical draw positions against a horse’s run style. The arrow formation top right in the chart implies a bias towards early speed and an inside to middle draw.

Conversely, note the relatively poor performance of those drawn high, regardless of run style; and it also looks difficult to overcome a low draw if you’re a hold up sort racing at six or seven furlongs in a double digit field.

None of the sample sizes used here are particularly big, so keep in mind that the above is indicative rather than assertive. But it confirms what is often said: it is very difficult to overcome a wide draw in a big field on fast ground at Chester.

Can a jockey make a difference at Chester? Most riders are, to a large extent, hostages to the fortunes of their trainers and horses; but at the more unconventional courses, can it be an advantage to have an experienced pilot in one’s corner?

Although the answer is probably yes, there is a degree of cause and effect in that if a jockey gets a reputation as being skilled over a certain circuit he is more likely to pick up the plum rides. The flip side is that, if a jockey is retained by a particular stable, he will be susceptible to the form of that yard.

Regardless, here is QT on Chester May meeting jockey performance, in handicaps only. 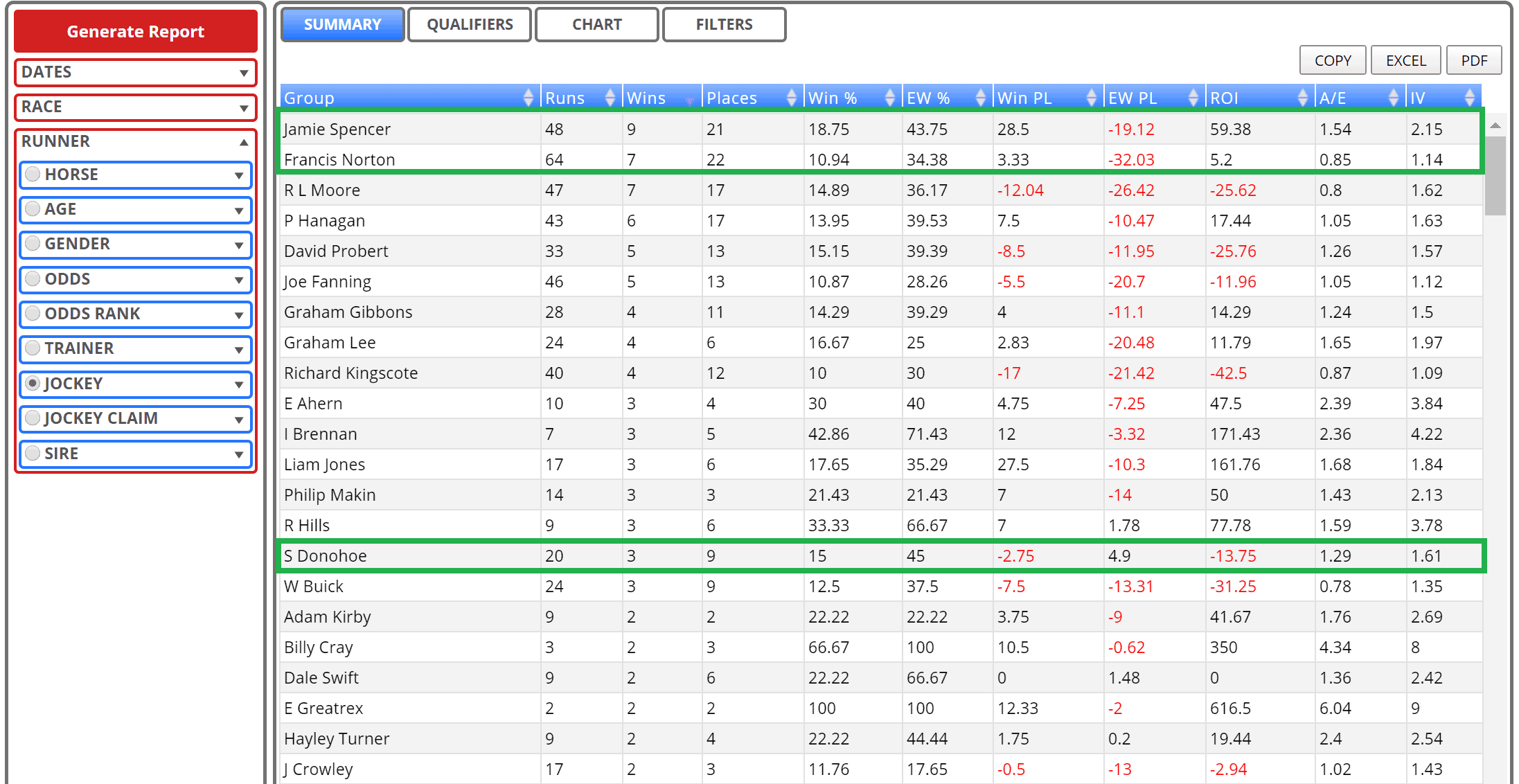 The top handicap jockeys at Chester’s May meeting since 2009

Some interesting gen comes to light here. First, that example of positive discrimination: Francis Norton is widely held as the ‘go to guy’ for Chester, and he certainly does ride the track very well as can be seen from his seven handicap winners at this meeting since 2009. But they’ve come from 64 rides, an 11% clip, and just 0.85 on the A/E scale.

Compare that with Jamie Spencer, supposedly a hold up rider on a speed-favouring track. His nine winners have come from just 48 rides at an A/E of 1.54. Not only that but he can back up a 19% win rate with a 44% place rate. Jamie Spencer, in fact, is one of the best judges of pace in the weighing room, from the back or the front of the field. He gets it wrong sometimes – that’s an occupational hazard – but I’d never be put off a bet at any track with Spencer in the plate (and yes, I have changed my position on this in recent years!)

Lower down, Steve Donohoe is an interesting name. His three handicap winners from 20 rides is fine – good even – but nine podium finishes is a very solid effort. He could be worth keeping onside.

We’re all set for three excellent days of racing on the Roodee. With a little luck we’ll come out in front by noting the above. In some ways, there is nothing new in trumpeting the form of Aidan O’Brien in Class 1 races at the meeting, nor in flagging that inside draws have the best of it in bigger field sprints on fast ground.

But such awareness can become the cornerstone of a betting strategy for the week. If playing placepots or intra-race bets like exactas and trifectas, knowing that Jamie Spencer is a high strike rate handicap jockey, or that Andrew Balding and Ed Dunlop should always be in mind in Chester handicaps, or even that Aidan’s horse probably will win the Derby trial, will help frame decisions about when to go narrow and when to go deep.

Good luck with your Chester May meeting wagers – it should be a terrific three days!