This is a one mile listed race at Windsor, and there are some useful looking horses in the field.

The David O’Meara trained Firmament is the current favourite, and he has been in really good form of late. He hasn’t finished out of the first three of his last six races, and looks a decent bet to carry on that form today.

Ryan Moore is on Kool Kompany and he has some useful form here at Windsor over the last year. He’s had four winners and six places for level stakes profits of 2.25 and 1.96 respectively.

Kool Kompany shows up really well on the Instant Expert tab, as he has three sections of green and two of amber. Interestingly he is also the only runner in today’s field to have won here over this distance at Windsor, which is a definite advantage. He is the highest rated in this field, and if he runs anywhere close to what he is capable of, then he had a great chance of taking this.

The Pace report shows what an excellent record early leaders have here over this distance. Runners that get away early have a great strike rate, with 23.77% of the going on to win the race, for a level stakes profit of 230.73. This really does highlight the importance of being really handy early on.

The huge outsider Beach Bar looks almost certain to lead, but based on the Pace scores, Kool Kompany will be right there with him, and I’d be surprised if he doesn’t go on to take this. 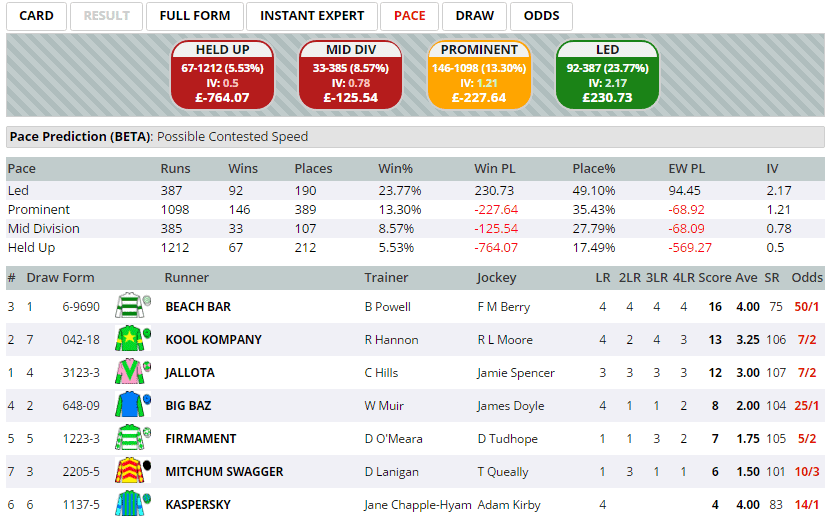 Stat of the Day, 15th May 2017 Monday Musings: The Blooming Flat Season
Scroll to top